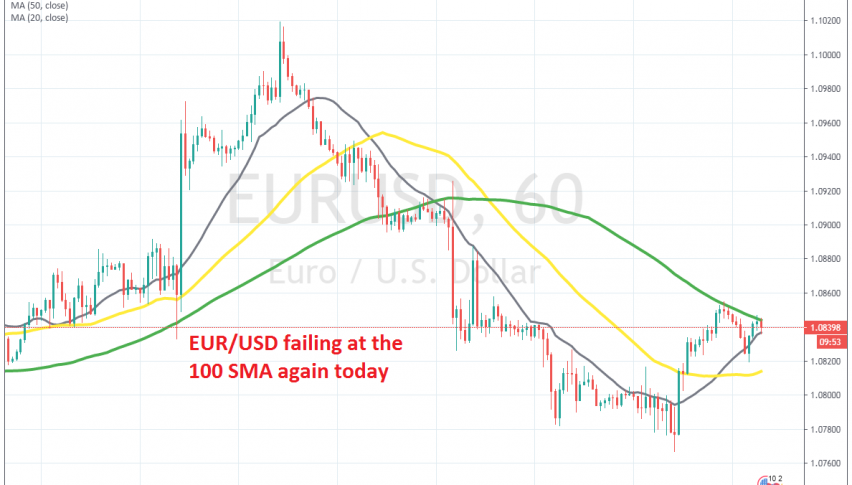 Shorting the Pullback in EUR/USD at the 100 SMA

The pullback seems complete for EUR/USD

EUR/USD turned bearish this week, after failing to hold last week’s gains at 1.10 and closed below that big round level on Friday last week. The pressure has been totally on the downside during this week and moving averages turned into solid resistance, particularly the 20 SMA (grey) which pushed the price lower.

That lasted until yesterday and EUR/USD lost around 250 pips from top to bottom. Yesterday, we saw this pair reverse back up after comments from FED’s Daly that the FED will throw more money at the economy, which sent the USD around 50 pips lower and EUR/USD reversing higher.

The 50 SMA (yellow) provided some mild resistance for a while, but that moving average was broken and EUR/USD continued higher. The climb continued until this pair reached the 100 SMA (green) on the H1 chart, which rejected EUR/USD in the first attempt. EUR/USD reversed down, but the 20 SMA now turned from resistance into support.

Earlier today EUR/USD moved back up, but the 100 SMA didn’t let go and we decided to open a sell forex signal just a while ago. The previous H1 candlestick closed as a doji below the 10 SMA, which is a bearish reversing signal and the current candlestick already looks sort of bearish, so this trade seems to be on the right track now.

Dollar Starts to Steady after Dropping for Weeks
10 hours ago