The Downtrend Continues in USD/CAD, But A Bottom Has Formed Now - Forex News by FX Leaders 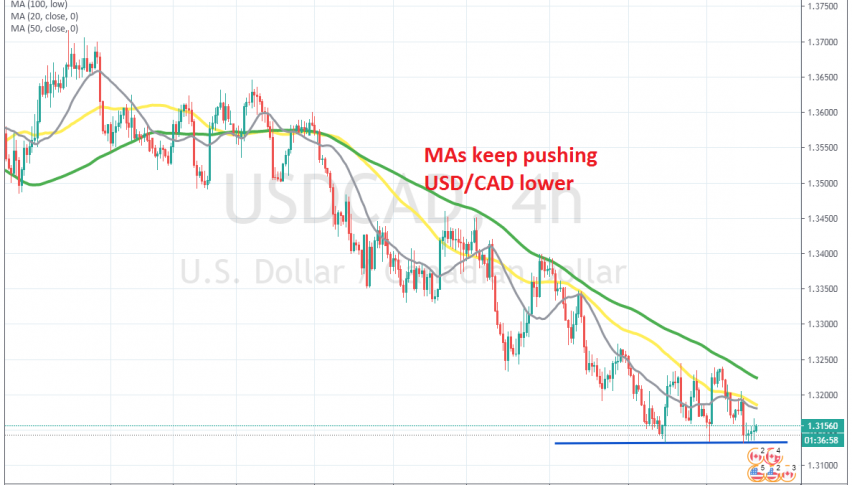 The Downtrend Continues in USD/CAD, But A Bottom Has Formed Now

The retrace higher is over for USD/CAD

USD/CAD has been bearish for several months now, with the USD declining, while crude Oil on the other hand, has been increasing, which has sent the CAD higher, thus USD/CAD bearish. Crude Oil got another boost this week, as the hurricanes approach the US, so the CAD has continued higher.

During this time, moving averages have been doing a great job providing resistance during retraces higher in different time-frames and reversing the price lower. On the H4 chart, we have the 50 SMA (yellow) and the 100 SMA (green) taking turns in stopping the retraces.

The 20 SMA (grey) has also helped when the trend picked up pace. So, sellers have been in total control here, as these MAs have been pushing the price lower, making lower highs and lower lows. Although, for more than a week, we haven’t seen any new lows in this pair, yet MAs keep pushing highs lower. If Oil keeps climbing, so will the CAD and the support at 1.3130s will finally break. We might go short on this pair when that happens.

Bitcoin Edges Closer to $20,000, As MAs Keep Pushing it Higher
14 hours ago
Comments