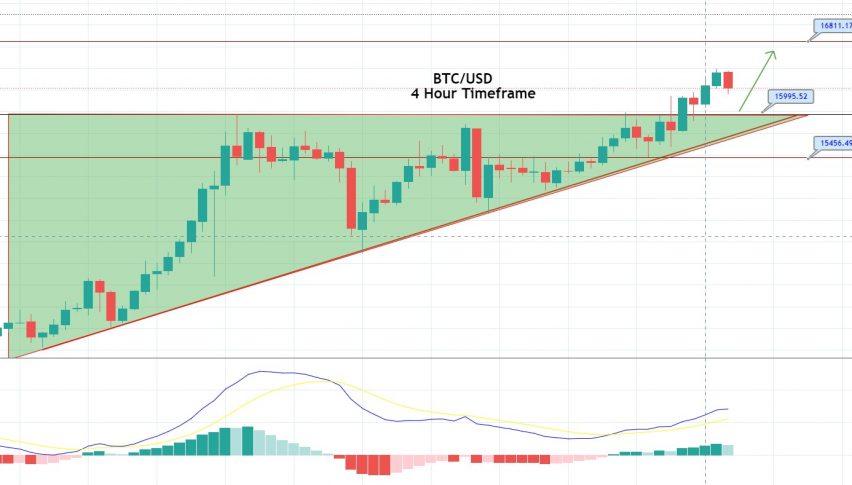 The BTC/USD closed at 16,155.25, after placing a high of 16,214.25, and a low of 15,465.44. The BTC/USD pair extended its gains on Thursday, for the 8th consecutive session, due to the weakness of the broad-based US dollar and the increased institutional demand for Bitcoin. On Thursday, this cryptocurrency rallied to almost a 3-year high, as the popular Bitcoin continued to ride the optimism that pushed institutional demand into the crypto market earlier in the week. Bitcoin advocates have waited a long time for institutional players to enter the crypto dispute, believing that larger capital pools are needed to legitimize Bitcoin as an asset class.

The latest rise in bitcoin earlier this week came after legendary investor Stanley Druckenmiller said that he was a bitcoin investor and talked about the popular crypto as a store of value. According to Druckenmiller, Bitcoin could be an asset class with a lot of attraction as a store of value. He revealed that he has bought bitcoin because he expects that this cryptocurrency will continue to outperform gold. He said that it’s been around for 13 years, and with each passing day, it has beome increasingly stable as a brand.

After these comments by a most respected financial manager and billionaire, Stan Druckenmiller, many other big investors, including Real Vision CEO Raoul Pal, also said that the endorsement of bitcoin by Druckenmiller should pave the way for other big hitters on Wall Street to jump on the crypto movement. This could result in an all-time high for bitcoin in the coming months. Another big-name institutional investor jumping onto the digital-gold bandwagon raised the Bitcoin prices to the highest level in 3 years on Thursday. However, many big-swinging Wall Street fund managers remain on the side-lines and have moved against the idea of bitcoin as a store of value.

The founder and CIO of Bridgewater Associates,  Ray Dalio, enlightened us by providing a few highlights of bitcoin adoption, including the threat of regulation. He also downplayed the demand for bitcoin as an alternative to gold. He said that he would never choose bitcoin over gold, as he does not think digital currencies will succeed in the way people are hoping. Furthermore, the weakness of the US dollar also added strength to the Bitcoin prices recently, after the second wave of the coronavirus started hitting the United States, forcing many states to impose lockdown restrictions that will have a negative impact on the US dollar and will ultimately have a positive impact on the BTC/USD.

The BTC/USD pair is trading with a bullish bias at the 16,311 level, having crossed over the 16,811 level, with support in  the 15,995 area. The violation of the symmetric triangle pattern could trigger a continuation of the bullish trend; therefore, we have opened a long-term buy signal in Bitcoin, floating in profit. Let’s move stop loss at the breakeven point, in order to avoid reversals. Good luck!

Bitcoin Plunges Over 9% - A Quick Technical Outlook!
3 days ago
Comments