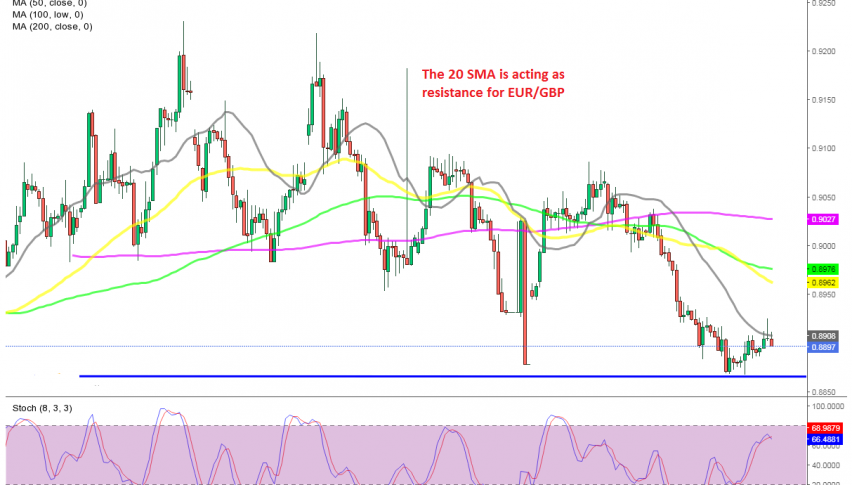 EUR/GBP Forming A Bearish Reversing Pattern on the H4 Chart

The previous H4 candlestick is a strong bearish signal

Last Friday we opened a sell forex signal in EUR/GBP , since this pair has turned bearish in the last two weeks.  GBP/USD has been trading on a bullish trend for about a year, while this year so far the GBP has gained additional strength after the Brexit deal between the EU and the UK.

EUR/USD on the other hand has turned bearish this year, losing around 300 pips as it approaches the big round level at 1.20. That level used to work as resistance prior, now let’s see if it will turn into support. So, last Friday EUR/GBP was retracing higher during a downtrend, so we decided to open a sell forex signal.

Buyers were finding resistance at the 50 SMA on the H1 chart and that time-frame was overbought, so we decided to go short at 0.89. But, buyers pushed higher to 0.8926, piercing the 20 SMA (gray) on the H4 chart. Although, now the price has returned back below it, so there was no close above it, which means that it was a fake-out.

The previous candlestick closed as an upside-down pin, which is a bearish reversing signal and the current candlestick is starting to look bearish already. The stochastic indicator is almost overbought and is also reversing down, so it looks like a bearish reversing chart pattern has formed. We are holding on to our trade, waiting for the bearish trend o resume.