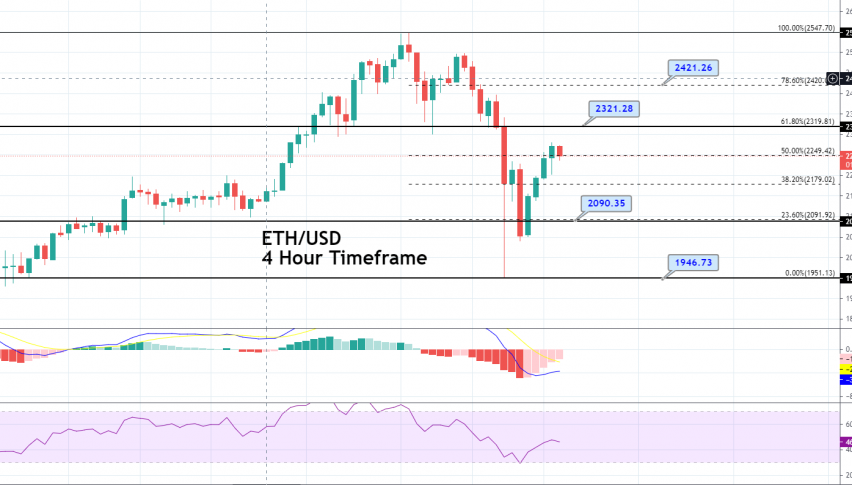 ETH/USD closed at 2237.31 after placing a high of 2338.53 and a low of 1948.93. ETH/USD dropped for three consecutive days and reached near 2100 level following the recent crypto market crash. On Friday, Ethereum prices reached their new all-time high ATH at 2544 level; however, from there, ETH started to reverse. The bearish momentum continued for three days, and prices reached their lowest since April 4th. The Ethereum prices fell below 2000 level after 2-weeks amid the recent decline in the cryptocurrency market that is supposedly triggered by the latest ban of cryptocurrency transactions in Turkey.

On Friday, the Central Bank of the Republic of Turkey (CBRT) announced a ban on cryptocurrency transactions that restricted the payment service provider from dealing in digital assets of any kind. This move from CBRT came as the country’s fiat currency was failing after President Erdogan dismissed the governor of the central bank. The interest of investors shifted towards digital assets due to their increased popularity and high inflation in the country. Turkey saw a massive spike in the number of Google searches for Bitcoin during the last few weeks. This resulted in a ban on cryptocurrency transactions in the country to secure the Turkish Lira from falling further.

This ban hit the cryptocurrency market hardly as BITCOIN crashed and fell from its new all-time high level. The bearish momentum then continued for three consecutive sessions and dragged the prices even lower. Ethereum also followed the crypto king Bitcoin and fell below its benchmark level 2000 for the first time in three weeks. However, some analysts and experts believe that the Turkish ban on digital assets did not cause the recent crypto-market crash; rather, it was driven by something else. They believe that it might be a correction in the market as the top cryptocurrencies were reaching their new all-time high levels. Furthermore, the transaction fees on the Ethereum blockchain have remained very high despite improvements in the platform. It was getting support from the latest launch of 3 Ethereum ETFs in Canada.One of the most significant limitations of the Ethereum blockchain has been high transaction fees, and on Friday, April 16th, the fees hit a record high of $24.74. This rise may have been caused by the increased demand for using the blockchain. 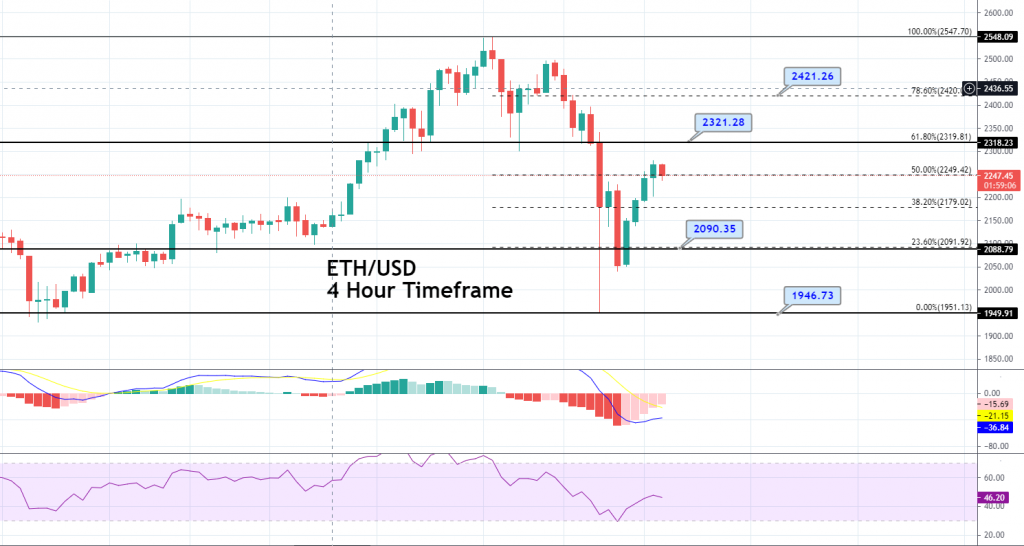 The ETH/USD pair is trading at 2,248 level, having completed 50% Fibonacci retracement at 2,249 level. On the higher side, the pair may surge to complete 61.8% Fibonacci correction at 2,319 level. The MACD and RSI are holding in a sell zone; therefore, the 2,319 level will be a significant level to watch today. Below this level, Ethereum can take a dip until 2,174 and 2,090 levels today. Good luck!

A Decent Pullback in Ethereum at Last
2 days ago