Last week, I decided to sell EUR/GBP, after this pair had been bearish all year but was retracing higher, and it looked like the retrace was about to end. But, that didn’t happen, and this pair has been trading below 0.86 for several days. I was expecting the currency pair to make a move today, since UK services and the Eurozone investor confidence reports were on schedule, which should get these currencies moving.

EUR/GBP began to make a move lower, but the 50 SMA (yellow) is keeping the price close to it, so this pair continues to trade around this area. This shows that the economy in Europe is cooling off as we leave summer behind. Below are the UK services and Eurozone Sentix reports:

Euro area investor morale dims further coming into this month, as concerns continue to mount over potential new restrictions in Q4, amid the spread of the virus. This is the lowest reading since April and it reaffirms the sentiment that growth expectations have peaked. 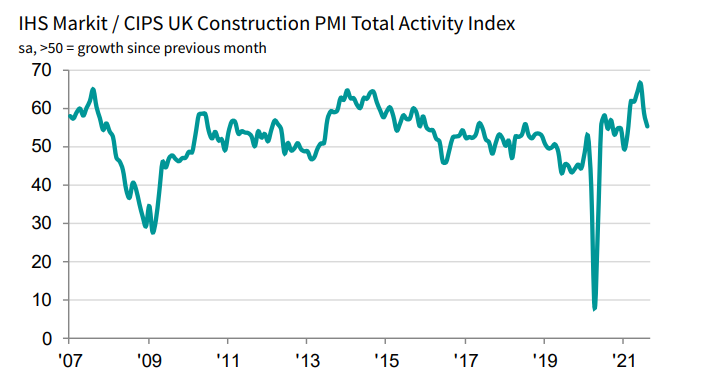 This is the lowest reading since the lockdown at the start of the year, as UK construction activity was hampered by a severe shortage of building supplies – which have also risen sharply in price, amid supply chain disruptions. Markit notes that:

“Evidence that the UK construction sector began to feel the impact of ongoing supply chain disruption was widespread midway through the third quarter of 2021. Growth rates for overall activity, as well as the three monitored subsectors, eased further from the recent highs earlier in the summer. Similarly, new business inflows have continued to increase at a marked pace, yet even here, the rate of growth has eased to a five-month low.

“Supply chain disruption continued to affect activity across the UK construction sector, as demand for materials and logistics capacity outstripped supply. Average vendor performance continued to deteriorate at a near-survey record rate, as firms noted severe shortages of building materials, a lack of available transport capacity and long waiting times for items from abroad, due to port congestion.

“As a result, the rate of input cost inflation faced by construction companies accelerated to the second-fastest on record, while the increase in subcontractor rates hit a fresh series high, fuelled by supply shortfalls in the sector. Despite this, businesses noted a stronger degree of optimism regarding the year-ahead outlook, as more than half of survey respondents predicted a rise in activity. This was underpinned by expectations that new contracts would be brought to tender across the construction sector, as markets continued to recover from the economic disruption caused by the pandemic.”

GBP/USD at A Decisive Level, After UK and US Services Improve
2 days ago