GBP/USD celebrates positive inflation signs and the market’s cautious optimism, breaking a three-day decline near 1.2000 early Wednesday morning. Nonetheless, Cable pair traders tread cautiously ahead of significant data/events. According to the latest British Retail Consortium (BRC) figures, the cost of fresh food sold in British retailers grew at the quickest annual rate since records began in 2005, to 14.3%, according to Reuters.

According to the news, other food item prices rose at the quickest rate on record to 12.4% in November, up from 11.6% the month before. Overall store price inflation jumped to 7.4%, a new high for the 17-year-old measure, up from 6.6% in October.”

On Tuesday, Bank of England Governor Andrew Bailey stated that the UK labor market is far more limited than previously assumed. “Medium-term inflation forecasts are quite crucial for my evaluation of where the bank rate should go,” remarked BOE Policymaker Catherine Mann before him.

Aside from the probable proactive BOE, softening Covid worries from China appeared to have supported the GBP/USD pair’s recent rebound. Nonetheless, the dragon nation’s daily infections fell for the second time in a row to 37,828 in the most recent count. Previously, China announced several measures to reduce the severe lockdown in crucial areas following a drop in daily Covid infections from a record high. Nonetheless, the world’s second-largest economy maintained its Zero-Covid policy.

Bloomberg reported reopening certain civic buildings in the broader Zhengzhou region, which is home to an important iPhone manufacturing plant. Earlier on Tuesday, it was announced that China’s Guangdong province would allow Covid patients’ close contacts to quarantine at home.

Similarly, the US Conference Board (CB) Consumer Confidence Index for November fell to 100.2 from 102.2 the previous month (revised down from 102.5).

It should be highlighted, however, that aggressive expectations from Fed Chairman Jerome Powell, mostly due to recent hawkish rhetoric among officials, appear to put the GBP/USD pair buyers to the test. Fears of a statewide strike by UK government employees, as well as fears of recession due to recent changes in economic policies, may also provide a challenge to pair purchasers.

Aside from Powell, an early signal for Friday’s US Nonfarm Payrolls (NFP), specifically the ADP Employment Change for November, as well as the second readings of the US Gross Domestic Product (GDP) for the third quarter (Q3) will be significant for GBP/USD pair traders to watch. 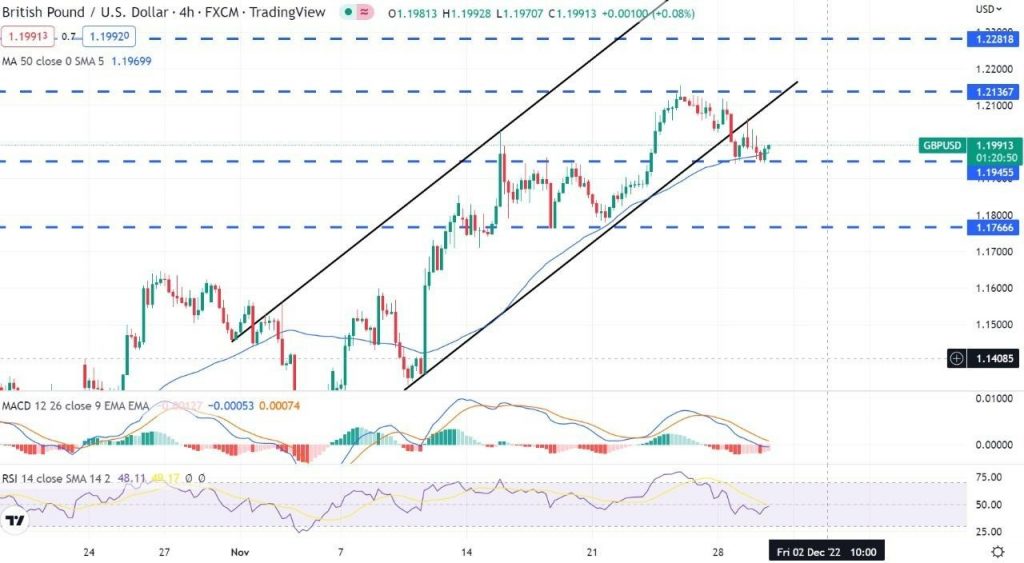 The GBPUSD pair is trading within the minor bearish channel visible on the chart. It is forming a bullish flag pattern, as the price needs to break 1.1995 to activate the positive effect of this pattern, followed by a rally to resume the main bullish trend, which targets 1.2080 and 1.2200 levels as the next main stations.
As a result, we will continue to recommend a bullish trend for the foreseeable future unless 1.1950 is broken and held below. Today’s trading range is expected to be between 1.1920 support and 1.2090 resistance.
The expected trend for today: Bullish
Check out our free forex signals
Follow the top economic events on FX Leaders economic calendar
Trade better, discover more Forex Trading Strategies
Related Articles