This week started a little relaxed and our forex signals were quite successful in the first two days, making about 165 pips. But as the week progressed, the market became irrational which made it harder to read. That put us in some difficulty… but on Friday we fought back and closed the week with a 50 pip profit. The petrol benefited from increased rhetoric from OPEC and other petrol-producing countries. They closed the week near 36$/barrel, and as a result, the Canadian Dollar benefited. We´ll cover all these developments in this weekly review, as well as conducting a technical review of trade ideas on two forex pairs. 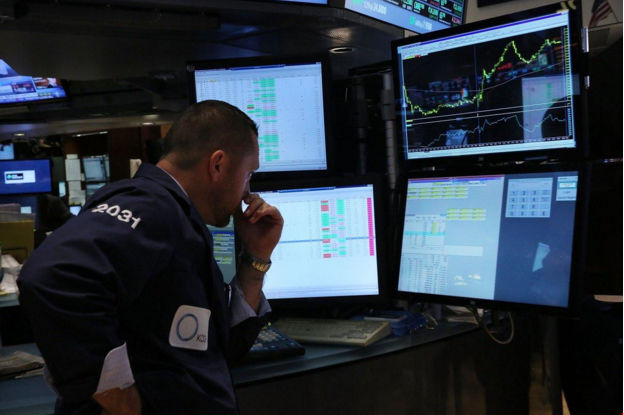 The forex market grew nervous as the week progressed

This has been another one of those weeks when the irrational price action drives the market around like crazy and makes the signal performance oscillate day-to-day.  The first two days were pretty quiet actually, and our results were really good, making about 165 pips from Tuesday morning until Wednesday morning. Then the market grew nervous for whatever reason and it got harder to forecast the moves. I mean, look at that chart below; EUR/USD declined nearly 90 pips after the 100k jump in the US payroll numbers and the lower U6 underemployment – but about 15 minutes later it reverses and ends up about 140 pips from the lows. How can you forecast that? 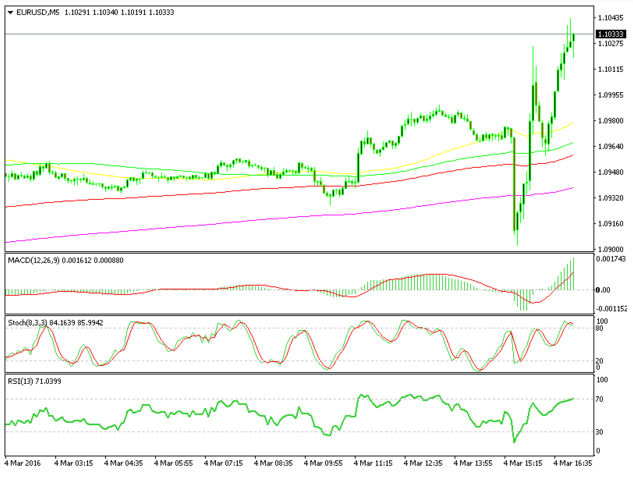 EUR/USD lost 80 pips after the data published, but shot up 140 pips right after

Anyway, we still ended the week with a 50 pip profit, which would have been much bigger if it wasn´t for these volatile moves. We had a couple of unfortunate forex signals, one in GBP/USD on Wednesday and one in EUR/USD on Thursday. These missed the take profit by 1-2 pips only to reverse and hit stop loss. If only those two forex signals we would have been 130 pips better off! We issued 19 forex signals in the 4-day period starting on Tuesday. We´re not counting Monday, because that day was the 29th of February and was included in the monthly report. We had 10 winning forex signals (seven losing ones) and two still remain open which gives us a win/loss ratio of 63:37. That´s below our long-term average but we hope to improve it next week, if the forex market becomes more irrational. We also hope to get some good profit from the EUR/USD sell forex signal next week. The ECB meeting is approaching and some of the long Euro positions will be closed in anticipation of some tough action from the ECB.

Following in the footsteps of the last two weeks, which were pretty quiet, the price action was normal. As we pointed out in the monthly review, which you can find here, the financial markets are still nervous and the first two weeks of February are not that far way to be forgotten. Any little thing can trigger the panic, even just the market sentiment. The market this week wasn’t really like those first two manic weeks of February, but the fear came back and the nervous feelings were the main drivers of the price action.

The USD made some gains in the first two days, but then things reversed as the market sentiment started to turn negative. We had a very good taste of the jitters that are still present after the release of the US employment numbers. The payrolls rose by nearly 100k from the previous month, even though the participation rate grew from 62.7% to 62.9% and the U6 underemployment dropped to 9.7% from 9.9%. The wages declined by 0.1% but that´s not really bad after a strong 0.5% in the previous month. The US Dollar rallied for about 90 pips in the first few minutes after the data release on the positive numbers, but it reversed just as quickly and lost nearly 120 pips when the market realized the wages had dropped. Then it reversed again back up; that shows how tough trading this type of market has become as of late. Another example was the 300 pip rally in of the GBP after it declined nearly 10 cents in February. However, nothing new from the EU/UK negotiations this week, despite the GBP surging.

Monday started out with the Japanese monthly retail sales falling -0.1% and the German retail sales beating the expectations at 0.7%. But at -0.2%, the yearly inflation in the Eurozone turned into deflation. The building approvals declined in Australia on Tuesday morning, but the RBA didn´t change the interest rates later that day. Both the Caixin and the PMI Chinese manufacturing numbers missed expectations and remain in contraction. British manufacturing data came out at 50.8, which is very close while in Europe the unemployment fell to 10.3% which is still very high. Later in the afternoon, the US ISM manufacturing showed a slight improvement but it is still in contraction. The Australian quarterly GDP came out better than expected on Wednesday and last reading was revised higher. The British construction PMI came slightly lower than expected while the US ADP non-farm employment beat expectations. On Thursday, the Eurozone services PMI came out winning, so it was a surprise to see the UK services post a sharp decline, probably linked with Brexit fears. The US ISM non-manufacturing PMI was a bit better than expected also. The US non-farm employment change posted some really good numbers on Friday, even with the participation rate ticking up two points. However, the 0.1% decline in the hourly earnings ruined all the fun for the US Dollar.

The Brexit fears have caused GBP/USD to decline more than 20 cents in the last several months. Looking at the monthly chart, it seems like that decline was the third part of the Elliott wave pattern which started in summer of 2014. This week, though, the GBP has managed to put up a fight and so far for the month it has erased February´s losses. That is an indicator that we might have entered the fourth wave… which is the right way up, but only if the short-term trend continues like this for the rest of the month. The stochastic and RSI indicators are oversold and heading in the right direction, so that is another sign of a retrace. On the other hand, we´re just below a strong support-turned-resistance level. On the daily chart, the price is at the 20 MA and the stochastic is nearly overbought. These signal us that a retrace might be over, but I´m not convinced yet to shorten this pair. Maybe we´ll wait until the price reaches the 50 MA in yellow at 1.44, which has provided resistance before. By that time the stochastic and RSI will be fully overbought. 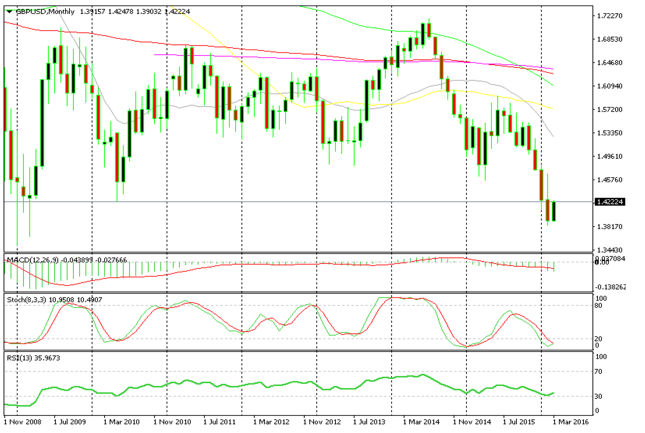 The RSI and stochastic are oversold, but the price is at a resistance level 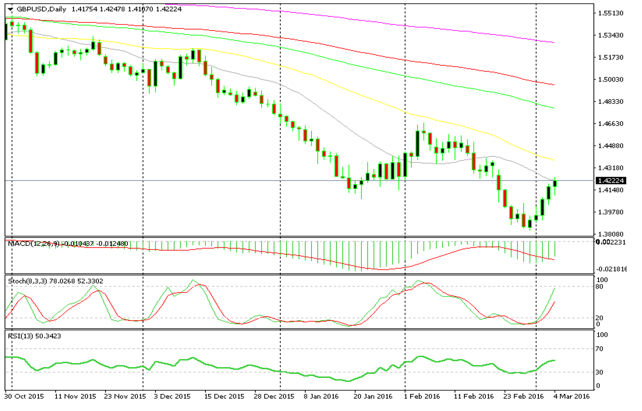 With the fall in the price of petrol, the Canadian Dollar has declined a great deal, meaning USD/CAD has been going up relentlessly. But, in the last seven months, the rhetoric from the petrol producing countries has increased and the CAD has benefited a lot. USD/CAD has declined nearly 15 cents since mid-January and some analysts think that it is time to buy this pair now. It is oversold in all timeframes, but in the monthly chart there still more room to go, so I think that we should wait a little longer before we open a long-term buy forex signal. The daily chart is severely oversold and the price is at the 100 smooth MA in red but I´d rather wait a little longer before pulling the trigger. 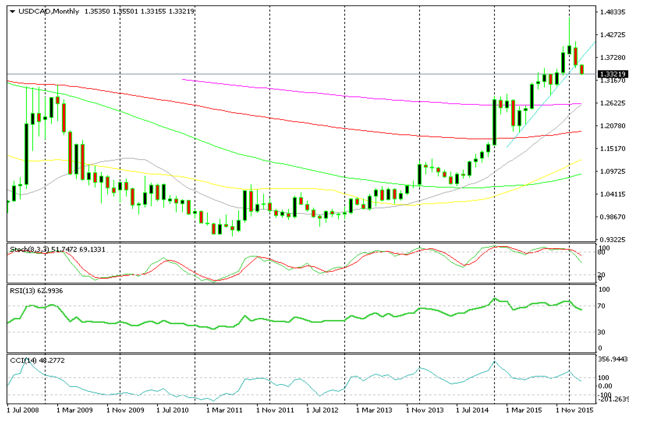 After an epic uptrend, this pair has finally put up a fight 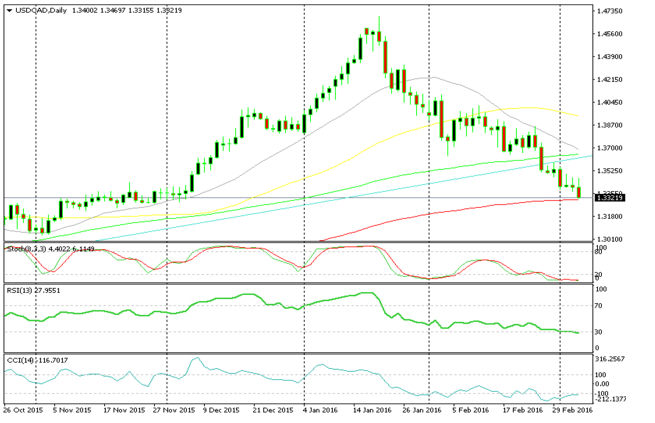 Will the 100 MA hold on and reverse the decline?

The first week of March is over and we managed to make 50 pips with our forex signals. It might not be that much but at least it is a good start. We started the week off well, making about 165 pips in the first two days. However, the market fear kicked in and price action became more irrational. The US employment report came out fair on Friday, except for the earnings which declined by 0.1%. It’s not that bad if you take into account the 0.5% increase in the previous month. Next week, the ECB will hold their meeting – which is a big event because the expectations are high for further monetary easing. We opened a long-term sell forex signal in EUR/USD hoping that the ECB will deliver what they have promised and garner a few hundred pips for us.