Summer is off to a great start, as we made 54 pips this week from our forex signals. Although it´s been a quiet one, due to some negative US employment data being published, traders realized the situation wasn’t all that bad. Because of this change in attitude, the US dollar has regained some stability this week, even though it experienced a narrow range against most pairs. It is for this reason that we had a lower number of forex signals, but on the other hand, the price action was easy to read, and this helped us tremendously. The Canadian Dollar finally had a positive week as well, and will cover this issue in detail in the following section. 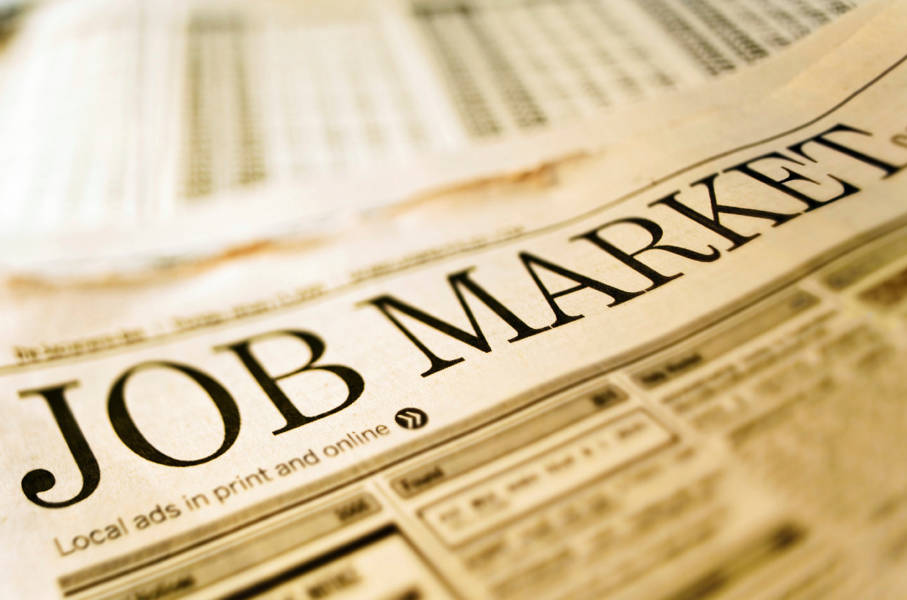 The US unemployment rate fell to 4.9% this week

Compared to last week, it has been pretty quiet with most pairs trading in narrow ranges, apart from USD/CAD in the beginning, and oil prices reaching $50/barrel in the later stages. EUR/USD also declined more than 100 pips on Thursday, but these were the only two substantial moves… it seems the other major pairs were hibernating. This quiet period is why the number of our forex signals has been low this week. We opened 14 forex signals – four of which hit stop loss and 10 hitting take profit. That gives us a 71:29 win/loss ratio. We´ve tried to stay clear of GBP/USD because of all the Brexit polls that are being published, and this has also affected our signal rate. But, we took our chance in the first two days of this week with two short-term forex signals, both of which hit take profit. The most profitable forex pair this week was USD/CAD. This pair has been in a downtrend this week so our forex strategy was to sell it during retraces. We did so three times, twice when the price retraced to the 20 MA (moving average) in grey on Monday and Wednesday and once on Friday when the price reached the 100 MA in green. All the three signals hit take profit­­ so this strategy worked well for our team. 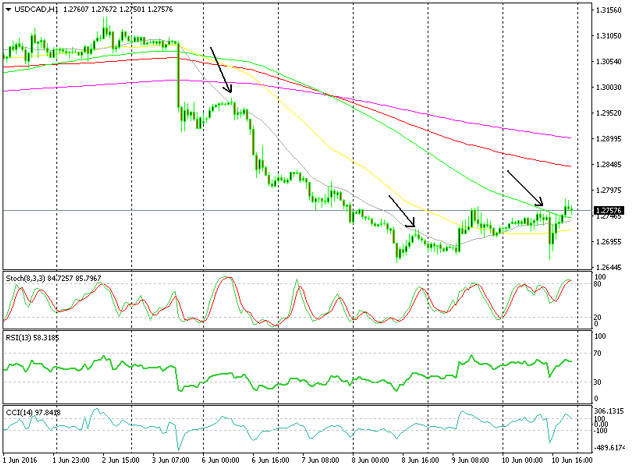 This Week in the Market

In mid-May, the FED released minutes of their April meeting. These were hawkish and the market expectations for a June or July jumped up. But last week, the forex market had a little shock. US employment for the month posted only a 38k gain (versus 159k expected) which is a far cry. In my opinion, it wasn´t that bad because the employment sector in the US has been consistently making150-200k gains a month, so 40k gains drop is just an anomaly. Besides, the Verizon strike last month contributed to a 45k decline in the jobs number, so without that consideration, the real number would have been around 95k. Anyway, the market didn’t see it this way and the US Dollar declined about 250 pips.

The odds for an interest rate hike in June basically declined to zero. To me, it wasn’t such a big surprise as it was to the forex market because this hike wasn´t a done deal and a July interest rate hike is still very possible. The Brexit referendum will be over by then and again, in my opinion, the status quo side will prevail (voting to stay), so one of the major external risks for the US will disappear and the FED will really want to hike. The market took all this into account after Friday´s data publication and decided that the USD is not such a bad place to invest. Therefore, the USD has been firmer this week and the price action has been less volatile.

This week, we´ll have a look at the economic events in the UK and Canada. But first, let´s take a look at the statement from the RBNZ (Royal Bank of New Zealand). Many forex traders were expecting an interest rate cut or at least a promise for a rate cut at the next meeting. But, the RBNZ didn´t deliver. Instead, it came up with some hawkish comments about inflation and the domestic economy – this naturally set the NZD rallying. We also had some positive economic data from the UK which kicked off with house price inflation (Halifax HPI m/m) which jumped 0.6%. Then came manufacturing and industrial production which were expected to be flat but they increased by 2.3% and 2.0%, respectively. The construction output wrapped all the action up, with a 2.5% monthly increase. So it seems like Brexit fears are wearing off after all. Friday reserved a nice surprise for Canada when the employment increased by 13.8k despite closedowns in Alberta during the forest fires, and the unemployment fell to 6.9% from 7.1%. Hopefully, this spells the beginning of the turnaround for Canada since they´ve been in recession for far too long.

After the enormous decline during the first few months of this year, USD/CAD made a comeback in May, but the 100 smooth MA (in red on the daily chart) proved to be a step too far and in the first week of this month, the pair has resumed the downtrend again. The oil prices have helped the CAD as well as both WTI (West Texas Intermediate) oil and the London Brent oil – which both broke above the $50/dollar mark. Now, WTI oil has fallen below with London Brent oil still holding up. The last two days have been bearish for oil so it looks like this might be the base for USD/CAD, but we first need to break above the 200 smooth MA (in pink) on the daily chart. On the weekly chart, we said it last week that the price is trading between the 50 and 100 simple MAs. 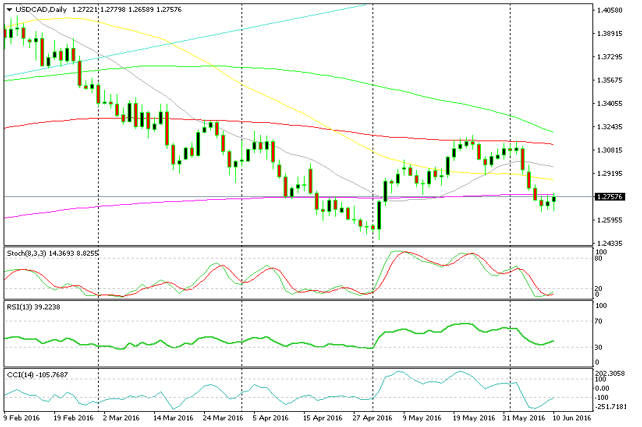 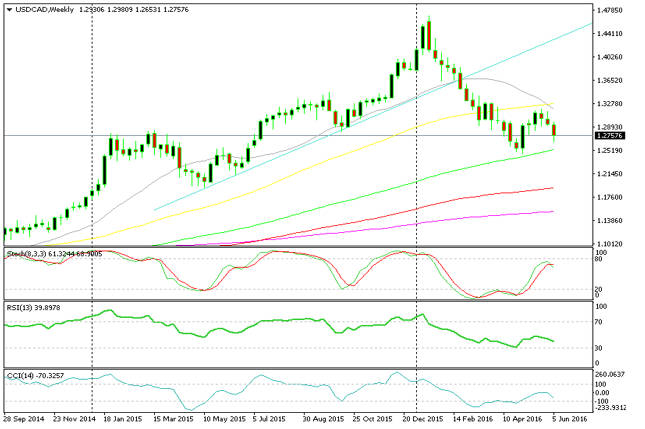 Last week, EUR/USD formed a pretty big bullish candlestick after last Friday´s disappointing US employment data. It pushed higher this week but the old resistance level around 1.1420-40 proved to be too strong and the week eventually closed about 150 pips lower around 1.1250s. Now, the price is heading down but the 50 MA in yellow on the weekly chart has turned into strong support. If the sellers have enough power to push the price below it, the US economic data from the coming weeks will be decisive for this pair and it will set the tone for the FED. 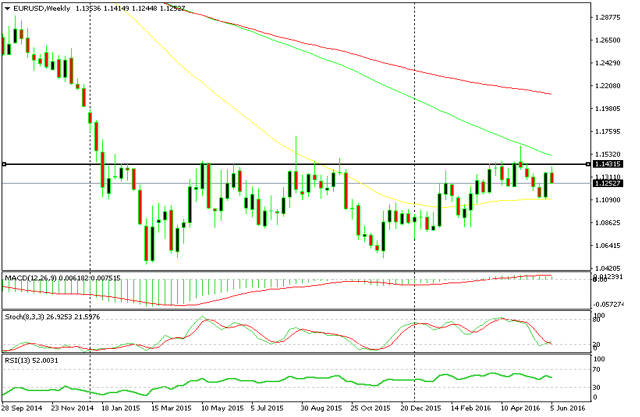 The old resistance has provided its services again 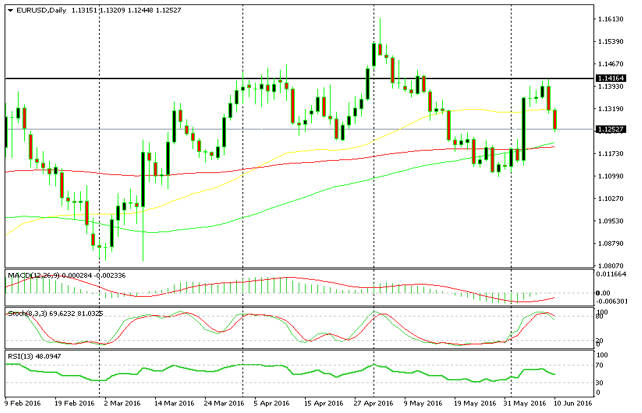 The Week in Summary

We closed the first week of June with some profit but we regret we didn´t open a long-term sell forex signal at 1.14 in EUR/USD, which would have brought us about 150 pips by now. Anyway, the focus now shifts to next week´s events. Next Wednesday is the FED meeting so we will see if last Friday´s employment miss will impact their decision. The US retail sales and producer inflation figures are also to be released before the meeting so maybe these numbers will have their say as well.

EUR/USD Trends Higher As COVID-19 Fears Persist
12 hours ago
Gold Bearish This Week, But MAs Continue to Hold As Support
Gold has turned lower, but it is finding support at the 100 SMA today
16 hours ago