The GBP – Where Does Brexit Stand Now, Part 2 - Forex News by FX Leaders

The GBP – Where Does Brexit Stand Now, Part 2

Ok, so we covered the political and economical side of the possible effects that the verdict of the UK High Court might have on the UK. However, since we are in the forex business, the most important aspect of the decision is the impact that it has in the GBP. So, let´s take a look at how the British Pound is reacting to the new revelations.

The first reaction was a 100 pip surge in GBP pairs, which was followed by another 50-100 pips move higher a couple of hours later. The second move came after the BOE (Bank of England) left the interest rates unchanged, so most of that move could be attributed to that. However, anti-Brexit ruling sure played a part on that move, too.

GBP/USD failed to break above the 1.25 resistance level, which is where the 100 smooth moving average (100 SMA) stands and it retraced about 80 pips down before having another go at that level as I type. This sort of price action tells us that the market got excited over the ruling. Surely, for some forex traders/investors, the hopes are higher for a Brexit cancellation now.

Still, there´s a lot of caution in the forex market. Otherwise, we´d be somewhere around 1.30 by now and that´s totally justified. As we said in our first market update today, this verdict doesn't mean that Brexit is dead. The most likely outcome will be a soft Brexit forced by parliament. After all, the vast majority of the members of the UK parliament voted to stay in the EU.

But the odds are not spread in all directions, as it is the case with politics usually. Of course, this might bring a tough debate in the parliament and possibly new general elections. Additionally, if things get out of hand, we might see another Brexit referendum next year, so we must always be cautious. But the odds of this are very minimal. 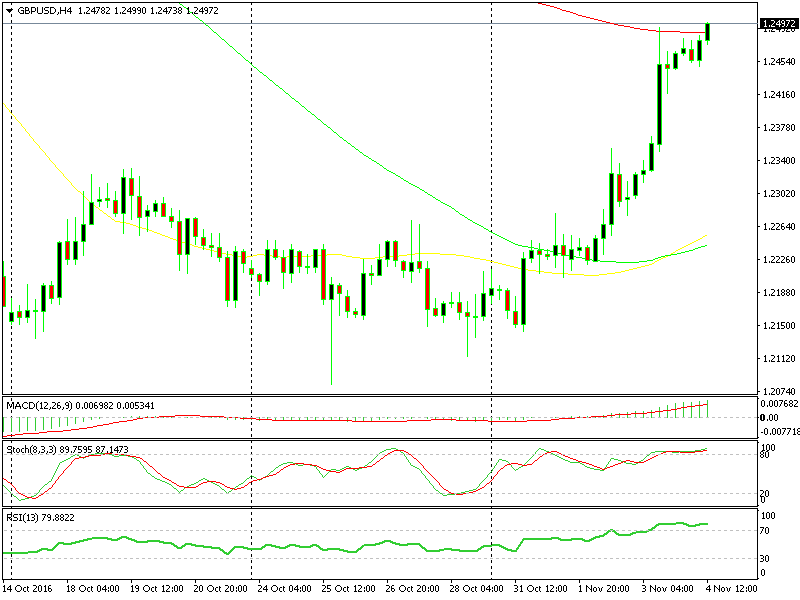 Is the 1.25 resistance level going to hold?

Brexit is a done deal for me and this is just one of the obstacles on this long and uncharted path. The question is, does the market know that? The forex market might take the price in GBP pairs another 500 pips higher. My long term bias is still on the downside for the GBP, but the timing of the trade (GBP/USD long term sell forex signal) will be the Achilles´ heel for us.

Judging from the price action, I can say that the market sentiment towards the GBP has shifted from extremely negative to positive for now. So, we´ll stay out of its way until GBP/USD reaches a level where the forex market thinks that´s enough, perhaps 1.2600-50 or even 1.28. When the momentum wears out, then we´ll go for the kill.