The ECB Extends QE, the Euro Completes A 200 Pip Round Trip - Forex News by FX Leaders

The ECB Extends QE, the Euro Completes A 200 Pip Round Trip

Just like me today, the forex market is finally back from the dead. I had "a bit of" food poisoning last night which is a signal that I must watch what I put in my mouth, while the Euro had a 100 pip surge about an hour ago, followed by a 200 pip decline which happened just as quickly and which is a signal that this EUR/USD rally is probably over.

I guess the market was waiting for the ECB because it´s been pretty quiet since Monday. Now the ECB released their statement and rate decision while the ECB president Draghi is making his speech. The market had been waiting for this meeting because there were these rumours circulating around that the ECB would change the QE programme since the Eurozone economy is in a better place now than 6 or 12 months ago.

Well, the ECB did touch the QE programme; they decided to keep the current 80 billion Euro monthly purchases  only for a few more months, which was the reason for the 100 pip spike in Euro pairs. I guess the robots just got the "few months" keyword and they ran with it.

But the spike diminished in a matter of minutes as the old fashioned manual traders like us saw the whole picture, which is what most forex analysts were expecting beforehand. The ECB monthly asset purchases will be around 60 billion afterwards which will continue as long as they reach their goals or see it reasonable.

Just a while ago, Mario Draghi just announced that the ECB discussed keeping the QE on hold at billion a month. Besides that, he said that they can buy assets below the deposit rate, which is another bearish signal. So, all in all, this is a dovish statement from the ECB since it puts the central bank on the picture for a long time.

Draghi just said that 1.7% inflation by 2019 (which is the forecast) does not meet their goal. So I guess they will be in the market for at least a few more years. That means one thing, sell the Euro. 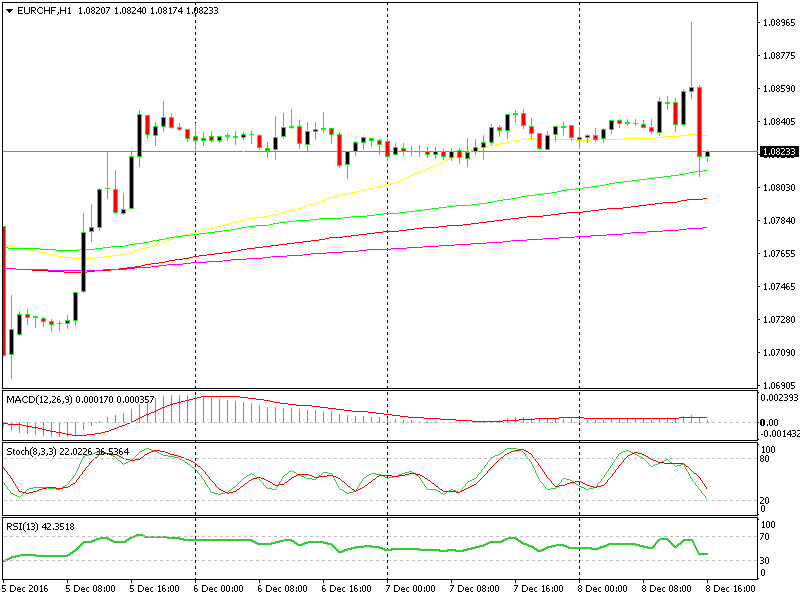 We missed the chance to open a sell forex signal around 1.0870s during the spike, but we got a nice 160 pip profit from our EUR/CHF signal. We had to successful short-term signals as well, an EUR/USD signal and a USD/JPY signal which reached the TP target during that spike. By the way, we´ll post an update next where we´ll look at the levels where we can sell EUR/USD now.