The U.S. dollar slipped on Thursday, tracking back toward recent lows after the Federal Reserve disappointed investors, hoping for a more hawkish policy stance.

The Federal Reserve of America accredited the improvements in consumer and business sentiment, and stated that job gains remained solid while unemployment stayed low. They also said household spending continued to rise but they felt that inflation remained low, business investment softened, and economic confidence was rising.

However, the Fed refrained from giving any explicit rate-hike signals or the timing of its next move, which turned into a nightmare and pour cold water on the expectations of a market investor’s dream.

The Fed has forecasted three rate increases in 2017. Perhaps economic improvement would prompt it to raise interest rates. Nevertheless, the market is pricing with less than a 50 percent chance of a hike until the Fed's June meeting.

The ADP National Employment Report also showed private employers added 246,000 jobs in January, up from 151,000 in December. The non-farm payrolls report on Friday is expected to show employers added 175,000 jobs last month, according to economist’s survey.

The lack of unambiguous buoyancy hurt the dollar but the ADP reported a sharp increase in payroll growth and ISM reported a pickup in manufacturing activity. Therefore, investors are still holding out hope that Friday’s Non-farm payroll data will be good.

The most important U.S data today are the unemployment claims.

The U.S. dollar index, which tracks the U.S. currency against a basket of six major rivals, edged slightly lower to 99.60, back toward a more than seven-week low of 99.43 on Tuesday, but still holding that strong support level.

Let’s watch the U.S. dollar index daily chart given below. 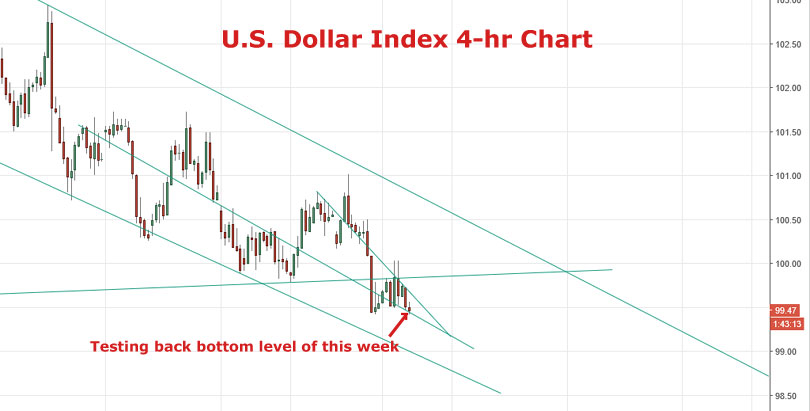 This is the U.S. dollar index daily chart.

Overnight, the dollar made modest gains on Wednesday as the Fed held steady as expected, but signaled an upbeat view on the economy and the prospect of sticking to a forecast of as many as three rate hikes this year.

So what went wrong with the Greenback fundamentally? Nothing; as long as it holds the solid support level within the range of 90.40-100, it stays cool. It's the 2nd time DXY tested back the bottom level of this week. If it holds above this level, that would be the confirmation or approval of establishing an upside solid rally by Friday or the start of next week.

Japan’s Nikkei225 is declining in Asia-Pacific session on Thursday, erasing early gains, as a stronger yen weighed on investor sentiment. The Nikkei225 slightly recovered till 19280 yesterday after declining till 18818. It is currently trading around 18938, -1.19% lower.

The Cabinet office released Japan’s consumer confidence index for January at 12:00 am ET Thursday. After the release of data, the yen changed and showed strength against its major rivals.

Japan's consumer confidence improved further in January to the strongest level in forty months. The consumer sentiment index edged up to 43.2 in January from 43.1 in December. This was the highest since September 2013, when the score was 45.4.

The employment index rose to 46.2 in January from 45.7 in the preceding month. Meanwhile, the indicator for income growth dropped to 41.6 from 41.9 in December. The survey was conduced among 8,400 households on January 15.

Most of the major exporters are mixed today. Canon is down 0.5 percent and Sony is lower by 0.6 percent ahead of its earnings results. Toshiba is adding 0.4 percent and Panasonic is edging up less than 0.1 percent. Toyota is up 0.4 percent and Honda is adding almost 1 percent. Hitachi is also gaining more than 4 percent after the release of their company report, which showed profit increased in the last nine months.

The worst performers were Nippon Sheet Glass, which is losing almost 7 percent, whereas SKY Perfect JSAT Holdings and Ube Industries are down almost 6 percent.

The Nikkei index is moving within the given levels mentioned in an earlier morning brief of this week. The strength in Japanese Yen after the release of the consumer confidence data and weakness in dollar put pressure on Nikkei 225.

“Maybe today or tomorrow it might give a drop to the level of 19000, just to test back the strong support area of last month. That will be the confirmation time to enter long; I don’t see any hurdles above it till 19500. Volatility is expected for a short term later today during FOMC press conference, so be careful.”