Forex Signals Brief for May 10th

The U.S. dollar is continuing its bullish rally for the second consecutive trading day. However, this was anticipated. Yesterday, in our Forex Signals Brief – May 9th report, we had already commented on a potential dollar bullish sentiment due to the phenomenal labor market figures from the United States.

The greenback gained popularity after Kansas City Fed President George's hawkish remarks. He played down the recent slowdown in the gross domestic product while saying that the central bank needs to gradually raise its short-term rates.

As a consequence, the precious metal Gold dropped quite dramatically, testing our suggested target level of $1214. In reference to my previous update, Green Pips In The Gold – A New Trade Setup Ahead, that happened to be the same level where I recommended entering a buy position.

In addition to this, our forex trading signal for the Japanese stock market index Nikkei closed at take profit. It continues to follow the trading plan detailed in our update, Risky Sentiment & The Nikkei – Bullish Signal.

EUR/USD – The Pair In Focus Today

The Euro remained under pressure yesterday and broke below $1.0915 to hit the initial take profit at 1.0880. The fluctuations in the pair remained in line with the suggestions given in our Forex Signals Brief – May 9th.

The losses in the pair were limited due to thin trading volume in the absence of macroeconomic events.

Today, we need to monitor ECB President Mario Draghi's statements as he is scheduled to speak about the impact of the monetary policy at the Dutch House of Representatives, in the Netherlands. Whenever a central bank representative is set to speak, we can expect volatility and unpredictable fluctuations in the market. 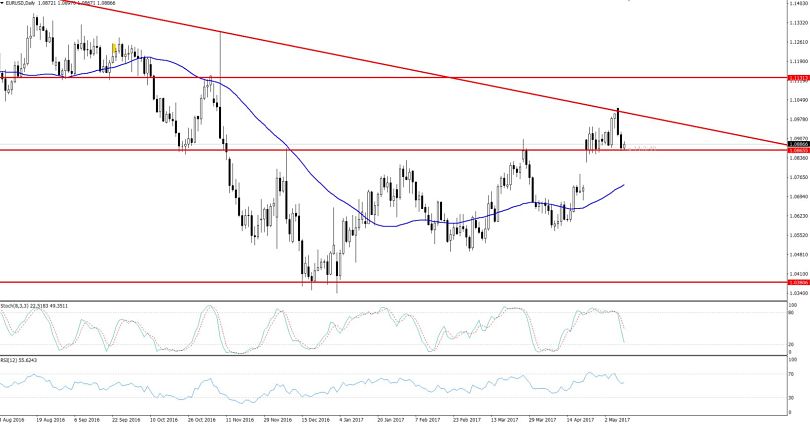 On the 4-hour chart, the pair has made its move towards the triple bottom level which is extending a very strong support at $1.0850/60.

The prices have crossed below 50 periods EMA in 4 -hour chart at $1.0910 and, for now, the same level is working as a resistance. Regardless, I'm on the bearish side as the RSI has also made its move below 50, signaling a bearish bias.

Yesterday, the USD/JPY rose closer to the weekly target which was recommended in the Forex Signals Brief May 8 – 12. However, it missed take profit by just 15 pips. Overall, the idea was to have a buy position above $113.10 with a take profit at $114.450. It was a good call.

However, this morning, the pair encountered fresh selling pressure as the Japanese Yen regained its footing right after the release of the BOJ Summary of Opinions.  President Kuroda sounded hawkish in parliament when he hinted about a QE (quantitative easing) taper. The term taper refers to cutting down the bond buying program. This ultimately lowers the money supply in the economy and helps increase currency value against other currencies. 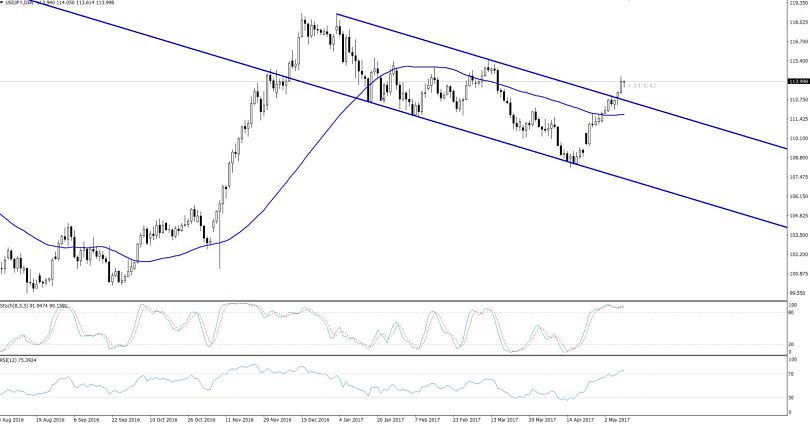 Despite the hawkish remarks from the BOJ, the pair still seems bullish. It has already violated the bearish channel on the daily chart, demonstrating that the buying trend isn't over yet.

The major support can be found around $113.700 and a break below this level is likely to push the market towards 113.250. The EMA and RSI are both strongly bullish and it's likely the pair will continue its bullish momentum today. But, keep an eye on $113.750.

Today, we are expecting another calm day in the wake of medium and low impact economic events. But it's important to monitor statements made by ECB President Mario Draghi along with the Crude Oil inventories to capture the movement in the Euro, Loonie and WTI Crude Oil.

Manufacturing Remains in Good Shape in Europe, But EUR/UD Headed for 1.10 and Lower
1 week ago