The FOMC minutes have hit the newswire, with U.S. equities and the USD taking the announcements in stride. Currently, the DJIA and S&P 500 indices are up moderately for the session, trading inside of tight ranges. December gold futures are also stuck in heavy rotation, posting an intraday range of 72 ticks.

At first glance, there seem to be no big surprises revealed from the release of last month’s FOMC minutes. Of course, this is a fluid situation. As commentary and opinions hit the wires, anything is possible.

December U.S. dollar futures experienced an initial flurry of selling, but have not extended the bearish daily range. 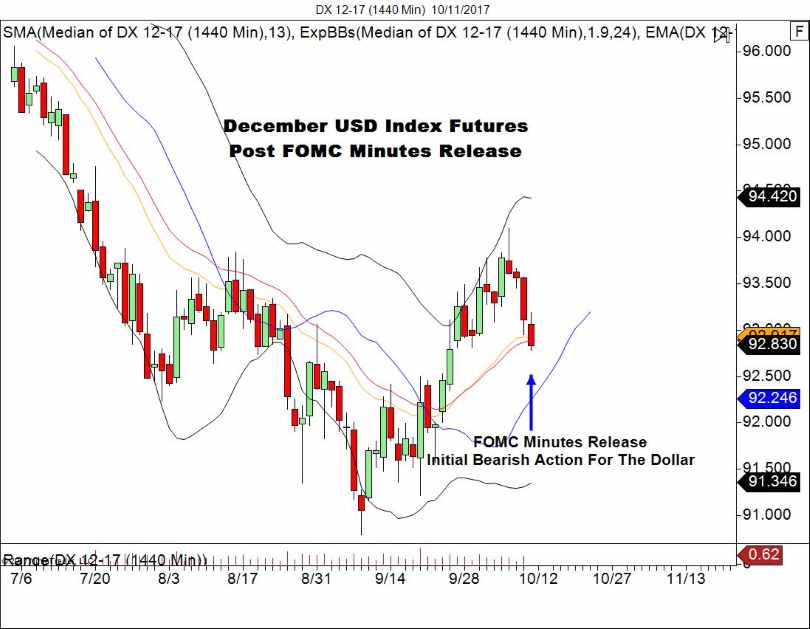 The early October strength exhibited by the USD is subsiding. As the fourth quarter of 2017 approaches, the USD index is trading in the bottom half of its yearly range. If the U.S. Federal Reserve is interested in promoting a stronger dollar going into 2018, time is running out.

The FOMC minutes are all about interpreting the rhetoric of the FED members. Below are the statements being focussed on by the media and investors(as reported by Bloomberg):

Overview: FED chairperson Janet Yellen’s hawkish statements after the September meeting had investors convinced that a December raising of interest rates was a foregone conclusion. Today’s minutes have shown that there is a considerable internal debate over whether inflation warrants a tightening of policy.

The result has been a relatively muted reaction from the markets. It seems that the release has not surprised anyone, and is already priced into the equation.