In the last couple of weeks, I have issued three Gold signals. I have gone short on Gold three times, and we have had three winning forex signals. My colleague Arslan takes care of Gold on our team, but the poor guy is getting married, so he’s off for three weeks and I’m covering him.

On Friday, Gold started retracing lower after trading in a downtrend. The retrace continued yesterday and at some point, I thought of going short. But I restrained myself, considering that the USD was under some considerable pressure yesterday.

That’s relieving because Gold continued to climb further today. It broke above the 50 SMA on the H4 chart and got close to $1,279, but it couldn’t close above that moving average. All H4 candlesticks closed below the 50 SMA, so according to the moving averages strategy, the break doesn’t count. 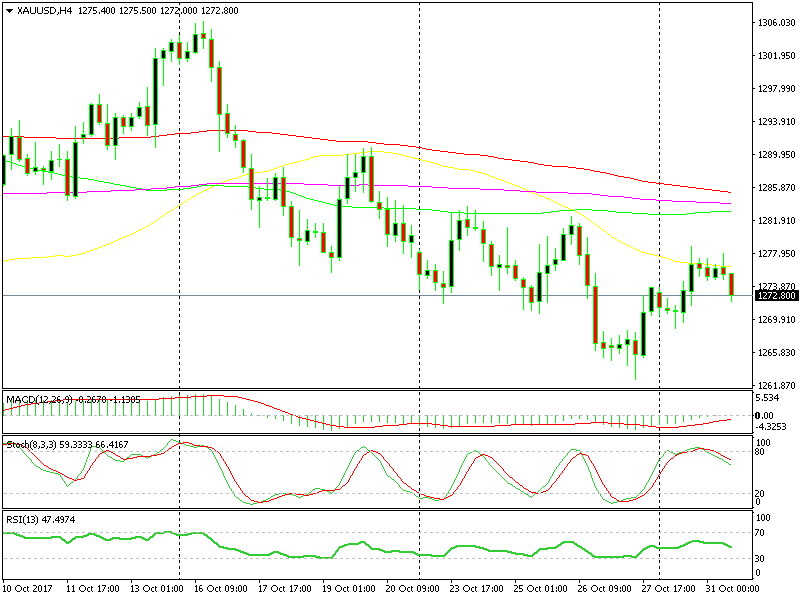 The 50 SMA is not broken unless the candlesticks close above it.

This sort of price action led us to believe that the retrace higher is over. The stochastic indicator is oversold as well, so both indicators were pointing down.

Besides that, the previous H4 candlestick closed as an upside-down hammer, which is a bearish signal according to the candlestick trading strategies. So, we decided to go short again on Gold, and we are already in profit with this Gold signal. Let’s see if we can get the fourth winning signal in a row in Gold.