Majors on Tuesday: RBA Minutes to Spark the AUD

It’s a short week in the US and it appears that everyone wants to get their business out of the way nice and early and go on holiday for Thanksgiving. At least that’s the way it seemed on Monday as markets were quite busy. Sometimes Monday is a slow one for the week, but the majors were active, to say the least.

In early trade, the EUR began a bit of a sell-off after talks collapsed in Germany over confirming a new coalition Government. This was a nice move for followers of our forex signals, as it gave us a nice win on the EUR/GBP, to get the ball rolling.

The Yen also found some footing. After selling off for a number of days the USD/JPY managed to hold up at 112.00 support and build a bit of a base.

The USD was really the story of the day (along with the EUR) as it managed to find a bit of strength. On the US Dollar Index (DXY), we managed to hold up at support at 93.50 and we have driven back to 94.00. The next upside target for us isn’t really until 94.40, however, there is a fair bit of resistance in that area and that might put the brakes on the USD for a while. We also have low volumes to contend with later in the week, so it will be hard to know if we can really break to the upside much further this week.

The AUD has been under a fair bit of pressure in recent weeks and we’ve been riding some excellent short positions all the way down. The RBA minutes are unlikely to shed anything new, however, if we do get a bounce it might be another opportunity to look for a short position.

I am targeting the 0.7600 level as on that I can potentially build another short around. We are quite oversold on the short-term and we have been hitting it pretty hard. 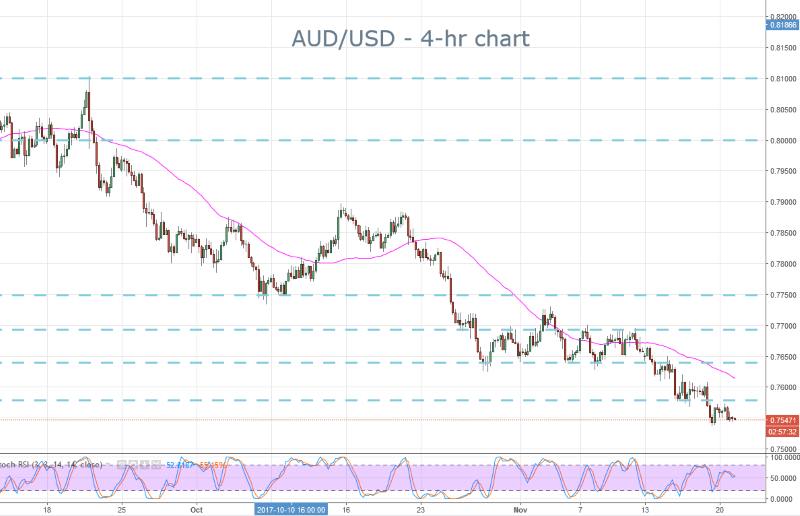