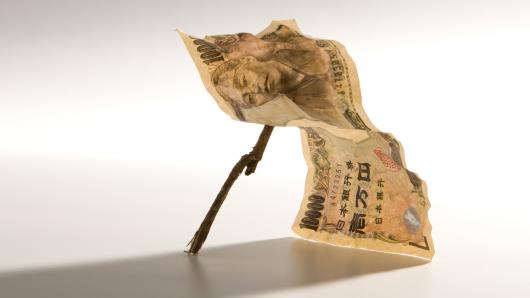 Cryptocurrencies have been sliding lower in the last few trading sessions. Although, the price action is pretty slow so nothing has changed in this market since yesterday. We will focus on forex in today’s midday brief, particularly on USD/JPY which looks like is reversing the long term trend and on EUR/USD. 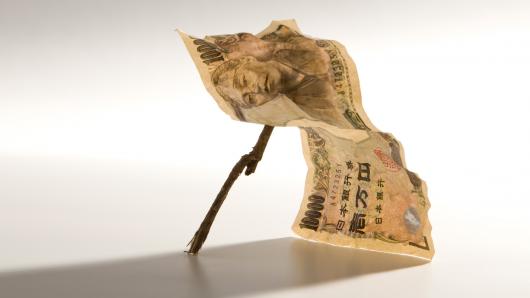 Getting Ready to Go Long on USD/JPY

USD/JPY has been on a downtrend for quite some time. It started reversing down at the ebgining of January and it continued to slide down until it reached the long term support area around 105.00-105.50.

The top of that support zone at 105.50 was broken two weeks ago but the sellers couldn’t push below the bottom of the zone at 105. The buyers pushed back above 105.50 and above 106. Sellers returned again and they tried to break the 105.50 level again early last week, but that failed.

The 105.50 level held and that was a sign that the trend was about to change. The price moved above the 50 SMA last week, as you can see on the H4 chart below. 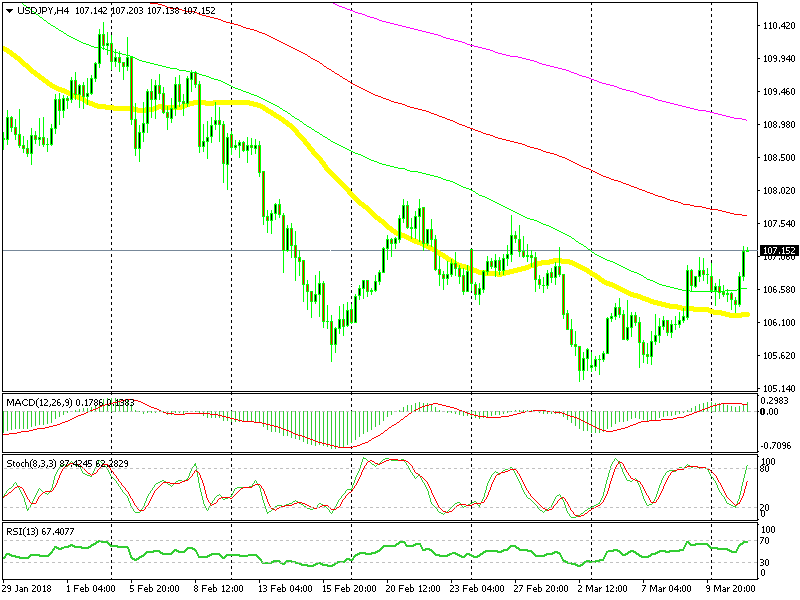 The 50 SMA has now turned into support 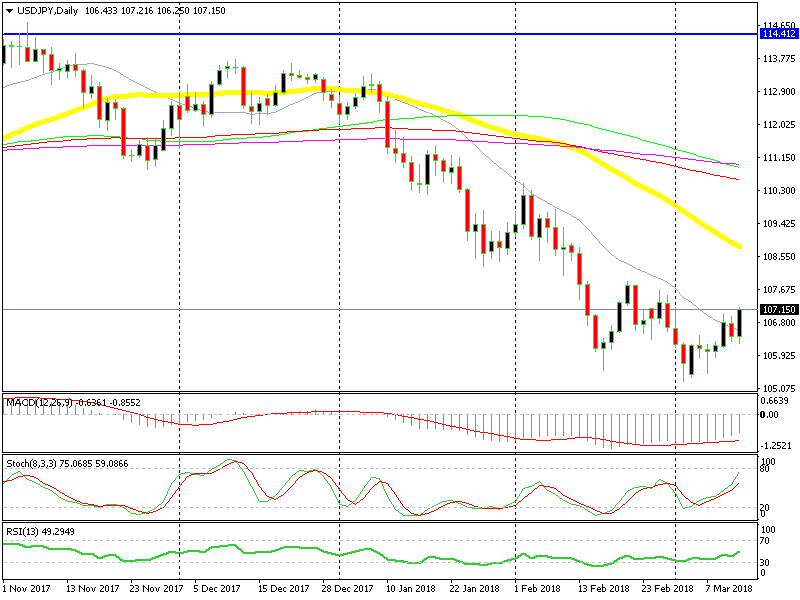 We finally broke above the 20 SMA

But, last night’s push higher took us above the 20 SMA. This is another sign that the trend is changing for this forex pair. If you switch to the weekly chart, you can see that the price has moved back above the 200 SMA which stands at 106.10. So, there are several signs that are pointing to a trend reversal.

Although, the daily chart is overbought. So, I will wait for another pullback lower, probably to 106.00-50. Then after checking the price action, we might open a long term buy forex signal in this pair.

The Retrace Higher in AUD/USD Should Be Over Soon

If you follow our forex signals, you should be short on this forex pair. We opened a long term sell forex signal by mid January at 0.7950s which is still on. We were 200 pips down with this signal at some point and 200 pips in profit a couple of weeks later.

Now, this pair has retraced higher and we’re nearly 100 pips in profit. But, it seems as the retrace has run its course. The stochastic indicator on the daily chart is already overbought, which means that this pair is now overbought.

You can see that this forex pair climbed to 0.7890 today. The area around 0.79 has been providing resistance before and looks like it is doing the same today as well.

Besides that, the 50 SMA (yellow) is standing right at that level. So, that is adding additional strength to this resistance zone. As we have seen quite often in the past, these retraces (up or down) usually end at a moving average and when stochastic becomes overbought/oversold.

The chart setup right now meets the criteria for a reversal down. A doji, a pin or a hammer candlestick would be nice since these candlesticks are reversing signals and they would weaken the buyers further. But, I have this feeling that the next move will be down and it will be strong. 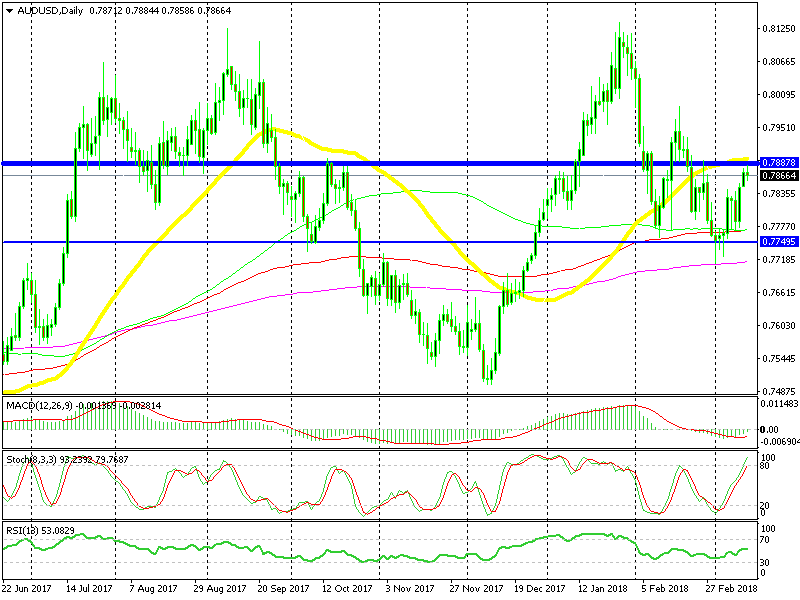 The retrace up seems complete 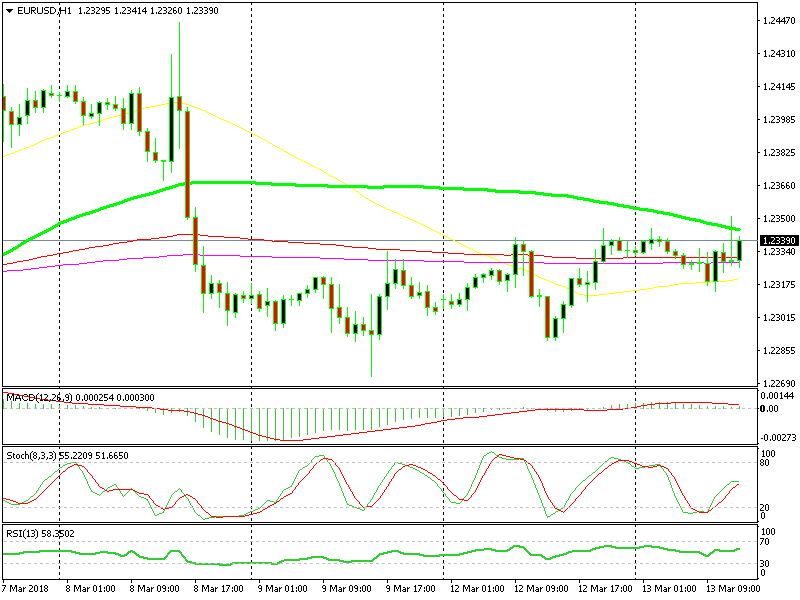 The buyers can’t push above the 100 SMA

We opened a sell forex signal in EUR/USD a while ago. The trend is down and the buyers don’t look strong enough for a decent retrace higher. This pair has traded in a range since last Thursday and now we are at the top of the range. The 100 SMA (green) is also providing resistance at the top, so we are bearish on this pair.

The markets have been pretty quiet today apart from Yen pairs. But, the US inflation report is scheduled to be released in about an hour, so that will definitely stir things up. We have been doing well in the last two days with forex signals, so hopefully we remain on top today again.