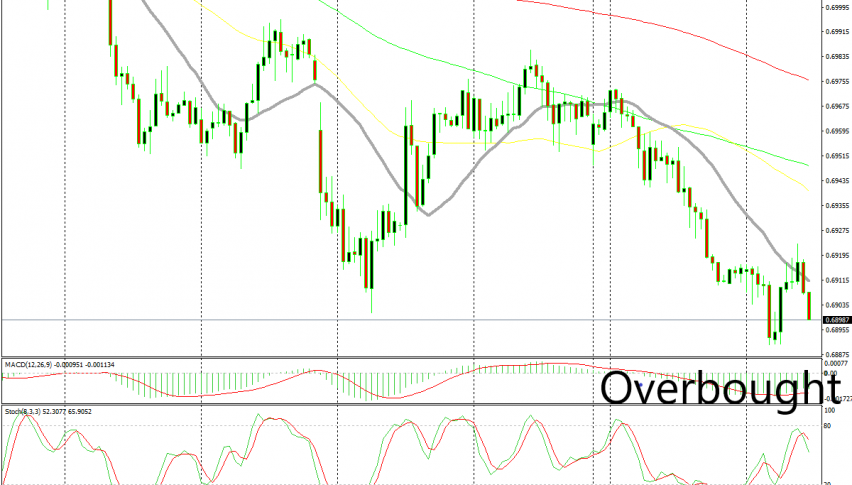 Playing NZD/USD and AUD/USD at the Same Time

Sold when stochastic was overbought

We just issued a sell forex signal in NZD/USD. It came a few minutes after selling AUD/USD, so it is two signals in the same direction for us. Well, the bearish trend has resumed again for commodity currencies, so we can take this much risk today.

The AUD hasn’t had a chance to pick itself up after resuming the downtrend yesterday. It hasn’t made a pullback higher overnight, which means that the sellers remain in full control of this pair. My colleague Arslan covered the RBA (Reserve bank of Australia) meeting minutes early this morning and he concluded that the RBA is remaining on the sidelines with rate hikes for now.  This is bearish for the AUD and the NZD as well, since these two currencies are heavily correlated.

So, we sold AUD/USD and a few minutes later we decided to take the same position on NZD/USD. We based our trade on the hourly NZD/USD chart. As you can see, this forex pair retraced higher this morning, unlike AUD/USD. The stochastic indicator became overbought a few hours ago and the hourly candlesticks formed a couple of dojis, which are reversing signals.

Besides that, the 20 SMA (grey) was providing resistance, so we decided to pull the trigger on this pair. After all, the EUR/USD buy forex signal that is still live, looks like will hit the SL target soon, so we will make up for it and make a few pips on top of it with these two other forex signals. The H4 chart in NZD/USD has formed a doji which implies a bullish reversal, but the price action looks bearish to me at the moment, so I think the market is following the H1 chart. We are getting close to the TP (take profit) target now, so both trades that we opened this morning are going well. Now getting ready to book profit on these two signals.