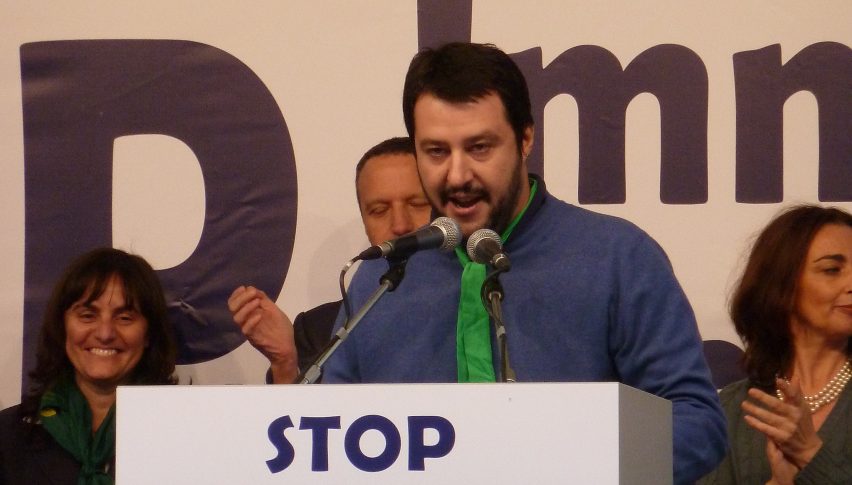 Legga Nord is totally against immigration., but that's not what is weighing on the Euro

What’s happening in the financial markets?

The market sentiment has turned sour. Everything went well, until a few weeks ago, but now everyone is running for their lives. North Korea and Trump are getting along nicely, so what has happened?

Well, for starters, the termination of the Iranian deal from Donald Trump is weighing on the markets, obviously. Iran is trying to continue to deal with European countries and China, but it is unclear what direction this will take now.

The tariffs that Trump’s administration is trying to impose on China as well as on other countries are the other factor. China is backing off and is promising to import more US goods, particularly food products and raw materials. It might help the US economy, but, it will weigh on other economies. Hello Australia, see you next year.

The markets were getting used to the new world order though. So, the factor that has turned the sentiment into the negative is coming from Italy. The coalition between the Legga Nord and the Cinque Stelle is seen as a threat to Europe. Their proposed candidacy for the position of Prime Minister was rejected by the Italian President yesterday and a technocrat looks to be the man for the job. He will present his cabinet to the President today which is likely to go through since the President is a Europhile and Europhiles love technocrats.

But, the two main parties in Italy don’t like that. So, it is very likely that we will see another general election in Italy. If that happens, the chances are that the two victorious parties will get even more votes. They might not get along with each other from what I have heard, but the situation is very blurry.

What’s the panic all about?

Both these parties increased their share of the public vote considerably in the last elections. The problem that the markets are seeing is the fact that they both came to power with populist promises and programs. They reassured the EU that they weren’t going to ruin it for everybody but their programs remain populistic and a threat to the EU.

The Italian public debt is one of the highest among the EU, only second to Greece. It stands at around 132% as a ratio to the GDP. That is extremely high and Italy has promised to reduce the debt. But, lowering taxes has been one of the main promises for these two parties. That means that the debt will increase further and it will be another threat to the stability of Italy.

The EU is having enough trouble with Greece regarding its debt, which stands at 180%. If Italy gets close to bankrupcy like Greece did 5-6 years ago, then the EU won’t be able to save it because it will need trillions of Euros. Greece is about 1/6 the size of Italy and it swallowed hundreds of billions of Euros.

The Legga Nord and the Cinque Stelle leaders did say that the EU has nothing to worry about. But, the markets don’t agree. The situation in Spain and in Britain are not helping things either, so the market sentiment has taken a major hit and the USD and safe haven currencies are coming out of this victorious, as they continue to gain massively. So for now, we have a bearish bias for EUR/USD and USD/JPY in particular, as well as for GBP/USD. The bounces in these forex pairs are good opportunities for sellers.