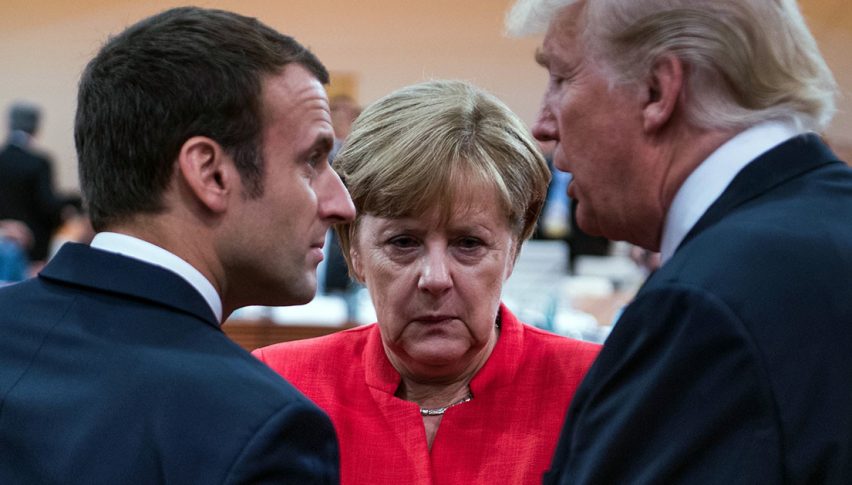 This is one of the most tense NATO meetings

Today is the second day of NATO summit in Brussels. Donald Trump has gone into the summit with a clear agenda and he is pushing it forward. He is pushing the European allies to increase military spending to meet the 2% criteria. Yesterday, Trump said that he wanted the European countries to increase spending to 4% and we heard rumours this morning that Trump threatened to walk out of NATO, but we knew that was a bluff to force them to at least get to 2%.

By the way, the European leaders have agreed to get to 2% on military spending and I agree too, not that I’m a leader. It is about time that the EU started to get an army together, because if Germany goes in full steam building a massive army, that would raise many eyebrows. I don’t know if Trump knows history, but the deal after WW2 was that Germany, Japan and to some extent Italy, would not build an army, the victorious would protect them if anything.

Anyhow, Trump is said to be getting back at Europe regarding trade on July 25th. If he doesn’t like the dialogue, then he will surely threaten the EU with new tariffs, that’s what he said basically. But at least, there is some sort of dialogue between the US and the EU, unlike with China. Trump also said that China and Iran will come begging for a deal.

German Final CPI MoM – The German consumer price index inflation came as expected at 0.1%. CPI inflation has been around 0.4%-0.5% in recent months, so this dovish turn doesn’t look too good, although it is just one month, we have to see next month’s figures as well.

French Final CPI MoM – The French CPI number was expected at 0.1%, but it came flat at 0.0%. Like in Germany, this month looks bad but the previous months have been promising, so maybe this is just a one off.

Eurozone Industrial Production MoM – The industrial production grew by 1.3% this month. That looks particularly good since in the last four months, we have seen three negative readings.

UK to Publish Brexit White Paper Today – Foreign Secretary Hunt said he expects a lively debate in the parliament today after the Brexit Whitepaper is published. He said that if the UK cannot cherry pick, the EU cannot either. The EU isn’t asking for anything from Britain, it is Britain that wants to have the cake and eat it too. We don’t even know if the EU will accept it either.

China Standing Firm – The Chinese Commerce Minister said earlier this morning that the US accusation of IP (intellectual property) theft is groundless. He said that the US brought the trade deficit with China on itself and that China will fight a trade war, even though it doesn’t like it.

2 More Rate Hikes for FED’s Mester – FED’s member Loretta Mester said this morning that the economic growth remains solid, unemployment is low and inflation is stable. That warrants two more interest rate hikes this year, although she is a hawk. Nonetheless, the Dollar began creeping higher on her comments.

Trump’s Comments on Europe – Donald Trump seems happy with the commitment of the European leaders to increase military spending to 2% of respective budgets. But, good times never last for him. He said that trade talks with the EU will begin next week and “if they don’t negotiate in good faith, action will be taken on cars”.

ECB June monetary Policy Minutes – The ECB minutes were more or less the same as what we already know by now, but what stood out is the comment about the QE. “Given the uncertainty, it is prudent to leave the end of QE conditional to incoming data”. Everyone is expecting the QE to end at the end of this year, so this comment should be dovish for the Euro.

White Paper Means Brexit – The Whitepaper was finally released a few minutes ago. According to it, the UK will end free movement of people with EU member countries and the ECJ rule. It also plans to diverge from EU rules for services, which means lower level of access to EU markets post Brexit. UK-based banks shouldn’t like this too much.

US CPI MoM – The US CPI report which includes the core CPI figures will be released shortly. Both are expected to come at 0.2%. A tick higher will be welcomed by the markets and the USD bulls, while they need to miss expectations by 2 ticks to have a negative impact on the USD.

US Unemployment Claims – US unemployment claims have remained in the 220k region for many months but last month they increased to 231k. This month they are expected to come back to the previous trend. 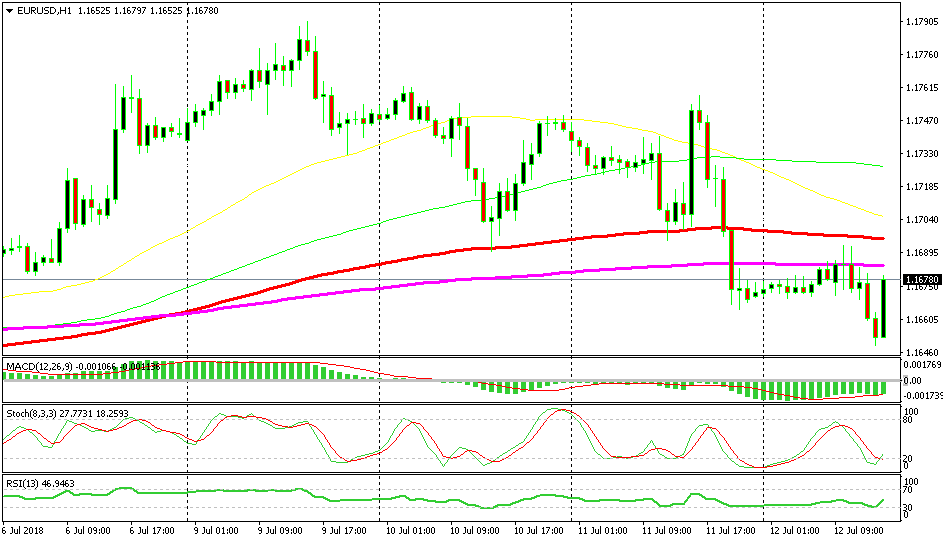 EUR/USD has turned bearish in the last few days and yesterday it made the decisive bearish move as the US bulls took control of the situation. This morning, EUR/USD completed another bearish move. One of the reasons for this bearish move was the comment at the ECB minutes which said that the QE (quantitative easing) programme will be dependent on the incoming economic data. Everyone is expecting the QE programme to end at the end of the year, so this came as a bit of a surprise. Hence, the situation has become a bit more bearish for this forex pair. Although, I would love to see a retrace to the 100 or 200 SMAs before going short on EUR/USD. That retrace is beginning by the way.

One comment I missed from the Chinese officials is that the US trade war is really bad for international business and might bring another recession to the world. That’s what really scares me. If the trade war escalates, then that is really possible. Considering that the global economy is barely back on its feet after a decade of economic trouble which came from the financial troubles in the US in 2008, this is a great danger which would hurt everyone and probably bring the world economy on its knees once again.