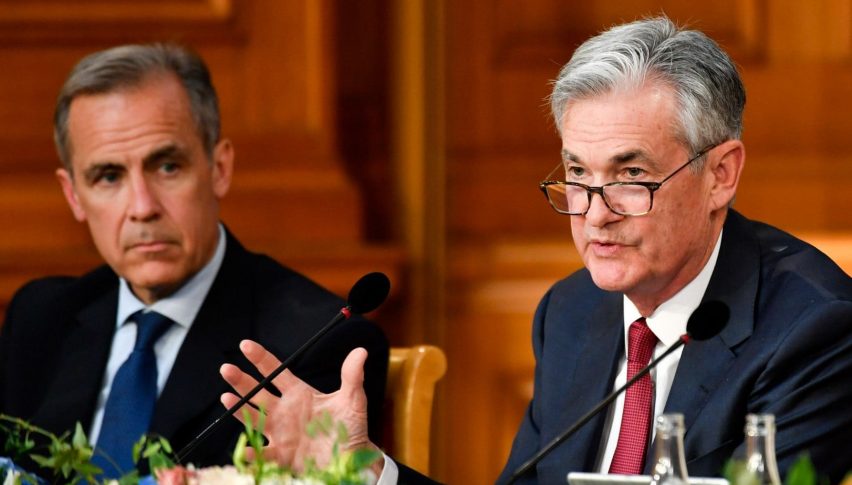 Forex Signals US Session Brief, July 17 – No Market Reaction From Carney, the Focus Turns to Powell

Carney left it all to Brexit, now it's time for Powell to try and move the markets

This morning we had the average earnings report from the UK as well as a press conference from Mark Carney of the Bank of England. One of these events should have got the market moving, at least the GBP pairs, but the forex market has been pretty quiet. The earnings in Britain came as expected, which should be good for an interest rate hike that the Bank of England has planned for August.

Although, Brexit would be a headache for any central banker and it is Carney’s job to deal with it. Carney held a speech after the earnings report was published. He said that if the UK government doesn’t reach a deal with the EU regarding Brexit, then that would affect the monetary police of the BOE. So, according to these comments, a rate hike next month will only happen if there is a deal regarding the UK departure from the EU. In the last hour, the USD has found its feet and is now making a move. Perhaps the market is expecting some positive comments from FED’s Powell later on.

Italian Industrial Orders – The monthly industrial orders rose by 3.6% in Italy. The previous month’s was revised higher too, from -1.3% to -0.6%. The yearly number came at 4.9%, which is why the industrial sales rose by 1.7% month/month. These are some solid numbers from Italy.

UK Average Earnings 3M/Y – The UK average earnings rose by 2.5% which is pretty solid. Although, the trend has been bearish as the wages were increasing by around 3% at the beginning of the year. Nonetheless, it is enough for the Bank of England to start raising interest rates. The unemployment rate remained unchanged at 4.2% which is below the natural level, supporting the rate hike scenario.

Italian CPI MoM – The CPI (consumer price index) inflation was expected to have picked up by 0.3% in June, but it came a tick short at 0.2%. At this pace, inflation will likely be between 2% and 3% by the end of the year. Although, not very related to the Euro since the Eurozone CPI numbers will take all the attention tomorrow.

Late Rate Hike From the SNB – According to a survey, the Swiss National Bank will likely start hiking interest rates in Q4 of 2019. This means that they will hike rates several months after the ECB. Not only has the SNB pegged the CHF to the Euro, but it has also pegged its monetary policy to that of the ECB.

EU-Japan Trade Deal – The EU and Japan have signed the bilateral trade agreement today after negotiating for 5 years. Hurray for Donald Trump who has made it possible to move things fast forward. Too bad the US is not in on the deal. In fact, the US is without trade deals with all major economies now.

Higher Earnings for Goldman Sachs – The earnings and profit numbers from US companies started coming out yesterday as we left behind the Q2 and H1 of 2018. The earnings figures were pretty good yesterday and today Goldman Sachs’ total revenue came at $9.4 billion against $8.74 billion expected.

UK Labour back Tories Against May – The UK Labour Party will back the rebels at Theresa May’s conservative party regarding the amendment of the customs deal. They’re both doing it to take Theresa May down, who is in a very weak position now but they want opposite results. The Tories want a hard Brexit, while the Labour wants no Brexit at all. A big mess will follow if May falls.

Canadian Manufacturing Sales MoM – The retail sales picked up by 1.4% in June in Canada. In the previous month, retail sales declined by 1.3%, so we’re back at the starting point. Retail sales are pretty volatile but today’s numbers bring us to the positive trend of the Q2.

US Industrial Production MoM – Industrial production has increased steadily throughout this year in the US, although in June it declined by 0.1%. Today, the production is expected to grow by 0.5%.

FED’s Powell testifies – The FED Chairman Jerome Powell will testify on the semiannual monetary policy report. The market has already started to move in favour of the USD, so I suppose forex traders are expecting some hawkish comments from him. 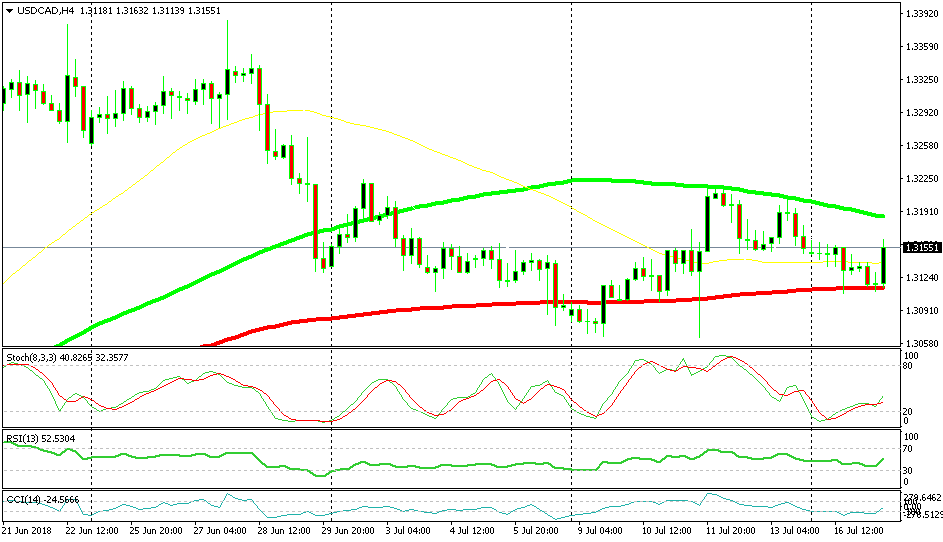 USD/CAD is already off the lows, having climbed 50 pips higher. Although, I think there’s still upside potential for this pair technically. The previous H4 candlestick closed as a doji which indicates a bullish reversal after the downtrend of the last few days. The 100 SMA (red) has been providing support to USD/CAD today, so it is another bullish indicator. Stochastic was oversold, but has started to turn up now. I would say that USD/CAD will likely climb higher for another 50 pips at least.

The US is without a trade deal now that Trump has ripped off all deals with major economies. Jerome Powell will come up shortly so we will see if he sounds dovish or hawkish. Although, the central bankers have a really difficult job now that politics is messing with economies: think Brexit and the BoE, and Trump’s trade war and the FED.