Forex Signals US Session Brief, July 20 – More Tariffs on China and No Rate Hikes for the FED - Forex News by FX Leaders 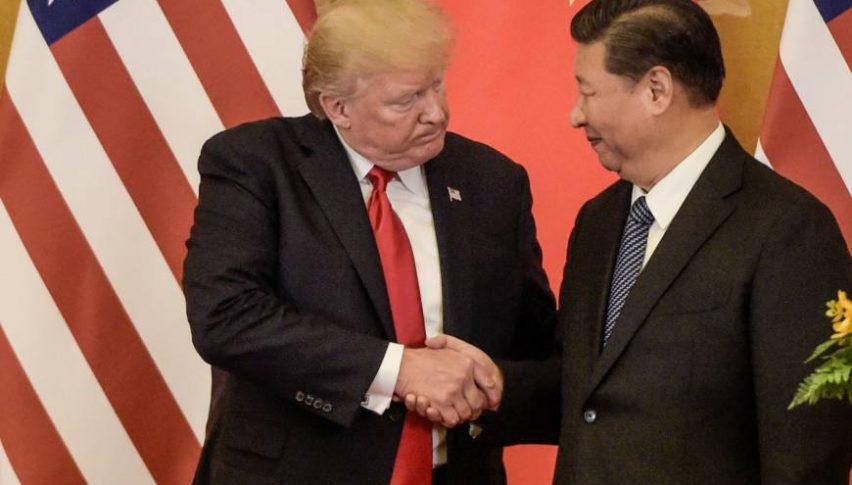 Forex Signals US Session Brief, July 20 – More Tariffs on China and No Rate Hikes for the FED

Financial markets opened with a slight hangover from yesterday. Donald Trump bashed interest rates going up in the US even though he said he liked Jerome Powell as the FED Chairman. That sent the USD around 100 pips down but the move was only limited to forex because the stocks barely felt it. It is strange for a President to interfere in the monetary policy of a central bank but these are strange times. Trump said that he is not trying to mess with the central bank’s independence and he is only commenting as a normal citizen would. But he is not a normal citizen, he is the President of the US.

Anyway, the market was calm this morning but Trump popped up again on CNBC during the European session and messed the markets once more. Trump repeated that raising interest rates puts the US at a disadvantage and that all the good things that his government is doing for the US economy, are undone by higher interest rates. Unlike yesterday, the stock markets tumbled lower today after these comments. He also said that he is planning to place tariffs on $505 billion of Chinese goods. That was another surprise. China, on the other hand, is fighting its battle on its soil once again, so read on to see what has happened today.

China Retaliates – The PBOC (Bank of China) devaluated the Yuan overnight. This is the biggest devaluation in a year. If the US places tariffs on Chinese goods which increases the value of them by 10% or 20%, then the Chinese can devalue the Yuan by the same amount and just carry on.

German PPI – The German producer price index came as expected, growing by 0.3%. That’s down from the previous two months’ figure which stood at 0.5%, but it still much better than March and April and it still is a good number nonetheless.

Eurozone Current Account – The current account surplus was expected at 27.2 billion Euros but came much lower at 22.4 billion. The trend has been bearish, declining from above 30 billion at the beginning of the year and this month’s miss confirms it.

Italy the Black Sheep of the Eurozone – The head of the budget committee Borghi said that Italy will sooner or later come out of the Euro. He is a Euro-skeptic, so not much reaction to his comments, although the danger is present. If Italy leaves, the Eurozone likely falls. We also heard comments this morning that the de facto Italian leaders Di Maio and Salvini are calling for the resignation of the Finance Minister Tria, although they denied it. More trouble in Italian politics.

More Tariffs from Trump – Trump said today that he is planning on putting tariffs on $505 billion of Chinese goods. He also repeated yesterday’s comments that he doesn’t like the FED hiking rates as it goes in the opposite way with what his government is doing. The Dollar is under attack as a result and stocks have taken a deep dive as well.

A Backstop on the Irish Border Is A Must – Earlier in the morning, Irish officials said that a backstop is necessary and later, the British PM May said that they are committed to a workable backstop. Although, she is trying to pass the ball on the EU court. I don’t think the EU will take the ball; it’s Britain’s Brexit so they have to solve the issue themselves.

Merkel Against Tariffs – Angela Merkel said that she doesn’t want tariffs on EU cars but if Trump goes ahead then retaliation is on the way.

Kudlow Backs Trump on China – The White House economic adviser commented that Trump won’t let go on trade issues with China despite mid-term elections coming up. He added that the Chinese President Xi Jinping is making a bad bet if he thinks that mid-term elections will weaken Trump.

Bearish Signal for the US Economy – FED’s Bullard said a while ago that the Yield curve inversion is a bearish signal for the US economy. He also repeated that the FED should hold off to hiking interest rates further. The USD took another dive on these comments.

Canadian Retail Sales – Retail sales jumped 2% higher while they were expected to grow by 1%. Last month’s numbers were revised higher as well. Core retail sales which strip out autos also beat expectations, growing by 1.4% while last month was revised up as well into positive territory. That’s great news for Canada despite Trump’s trade war.

Canadian CPI Inflation – The consumer price index remained unchanged month-on-month but the yearly number came higher at 2.5% from 2.3% in the previous reading. Good news all around for Canada and the Loonie is surging. 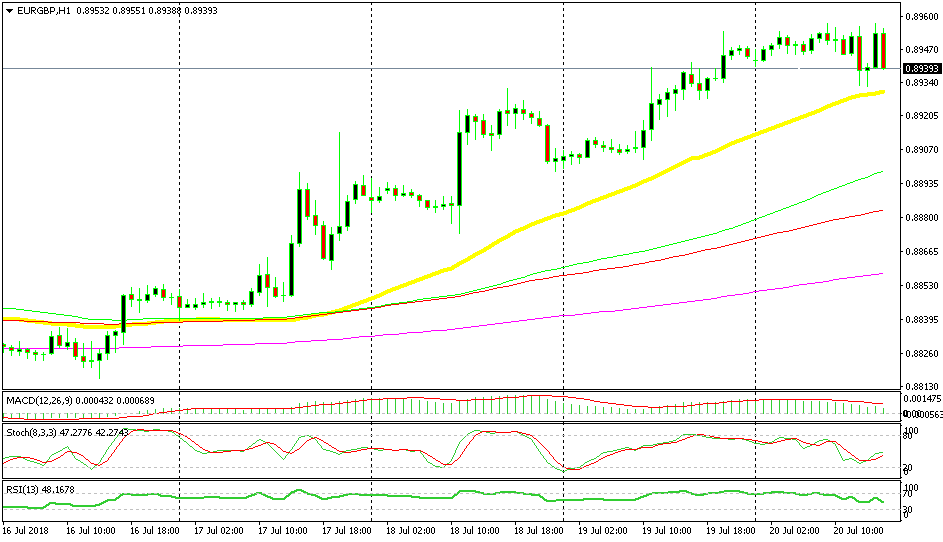 The trend is clearly bullish for this pair

We went long on EUR/GBP a while ago. This forex pair has been on a bullish trend for more than a month and this week the bullish trend has taken more pace. The 50 SMA has been pushing the price higher so a retrace to this moving average looks like a good opportunity to go long. The stochastic was almost oversold earlier and it is now turning higher. Besides, Brexit is always a danger for the GBP and it is a bigger thing than anything that the Euro might be facing.

There isn’t much on the economic calendar in the US session apart from the Canadian data which came out a while ago. Although, with the comments from Trump in the last few days and the moves that have followed, there is a risk that the forex traders try to position themselves, before the week draws to a close, so be careful.