Forex Signals US Session Brief, October 1 – Stocks and the CAD Recuperate Losses As Brexit and NAFTA/USMCA Deals Come “Within Sight”

The new NAFTA will be called USMCA

Last Friday we left the markets on a pretty negative momentum as the market sentiment deteriorated over Italian budget deficit. The deficit for the 2019 budget was said to be at 2.4% of the GDP, which falls below the EU limit at 3%. But the total debt stands at 130% of the GDP in Italy which is pretty dangerous and it stands only second to Greece in Europe. Although Italy has a large industrial sector which can support it, unlike Greece, but the EU is set to not accept it as a piece on La Repubblica showed today. So, the market was in panic on Friday and stocks had a small crash. Today though, the sentiment has improved despite the article on La Repubblica, so the European stock markets have been rallying during most of the European session.

The Canadian Dollar is also rallying strongly. It started to reverse higher on Thursday last week and it picked up pace on Friday. Today, the CAD opened with a 65 pip gap higher on news that Canada might be included in the NAFTA (North American Free trade Agreement). The new agreement is called the USMCA which sounds pretty similar to YMCA, doesn’t it? I would love to see the three leaders doing the dance from the YMCA song of the Village People. Anyway, the CAD has gained around 300 pips against the USD in the last few trading sessions, and considering that the USD has been the strongest of the major currencies during this period besides the CAD, it makes the CAD seem much stronger against the other majors.

EU to Reject Italian Budget? – There was an article today in the Italian newspaper La Repubblica which said that the European Commission is to reject the Italian budget since they would like the deficit below 2% for Italy, despite the ceiling set by the EU being at 3%. The stock market is not responding to that. Perhaps the markets know something we don’t?

German retail Sales – The retail sales took a bearish turn last month in Germany as they declined by 1.1%. this month they were expected to increase by 0.4%, but they declined again, albeit by only 0.1%.

European Manufacturing PMI – The manufacturing output remain unchanged in France and Germany in September but it declined sharply in Spain and it remained almost flat in Italy. That hurt the Eurozone manufacturing PMI number a little as it slipped to 53.2 points, from 53.3 previously.

Eurozone Unemployment Rate – The unemployment rate declined again in Europe to 8.1% from 8.2% previously. The unemployment number from Italy seem to have contributed most to the decline as it fell to 9.7% from 10.4% previously and against 10.5% expected. That was a bit of a surprise but a positive one nonetheless.

UK Manufacturing PMI – This manufacturing index was supposed to decline again today from 52.8 points to 52.6, but it jumped higher to 53.8 points. Last month’s number was revised higher to 53, so it was a positive report for British manufacturing. Although, lending and the money supply dried up a little.

Genoa Bridge Might increase Italian Budget Deficit – The Italian Interior Minister said today that the construction of the bridge, which collapsed in Genoa killing many people, might increase the deficit. Italy desperately needs some infrastructure spending for those who haven’t been in Italy recently.

EU Must Match UK Says Raab – The UK Brexit Minister Dominic Raab said earlier today that the EU must match UK’s pragmatism and ambition regarding Brexit. He added that the EU’s approach is one sided and that it is wrong to try to punish the UK. Well, the EU stands where it was, the UK has the burden to find a way out.

Trudeau to Hold Conference at 16:00 GMT – The Canadian Prime Minister Justin Trudeau is holding a press conference at 4 pm GMT time. The North American trade deal seems almost complete now, hence the relentless surge in the CAD, but positive comments from Trudeau will surely give the CAD some more support.

Trump to Speak on NAFTA/USMCA at 15:00 GMT – Donald Trump will hold a press conference on NAFTA which will now be called USMCA (US, Mexico, Canada). Trump already gave it all away when he tweeted a while ago that they reached a new trade agreement last night which was the deadline, but there are always surprises with Donald Trump.

UK to Make A Compromise on the Irish Border? – There was a piece published on Bloomberg just now saying that the UK Prime Minister Theresa May has a new proposal for the Irish border issue. She has rejected a soft border, saying that it would break up the UK, but there might be a concession from the UK just to get a deal. This isn’t anything major just yet and Raab popped up a few minutes later saying that the Irish border is an outstanding issue, but a deal is within sight if we can deal with this issue. We have heard that many times before, but the GBP jumped 100 pips higher in minutes nonetheless.

US Manufacturing PMI – The US manufacturing PMI report will be released shortly, It is expected to cool off slightly to 60.1 points from 61.3 last month, although, this is still a very decent pace of expansion.

US Total Vehicle Sales – Vehicle sales have been slowing in the US in recent months. They have declined to 16.7 million from above 17 million several months ago. Today they are expected at 16.8 million. 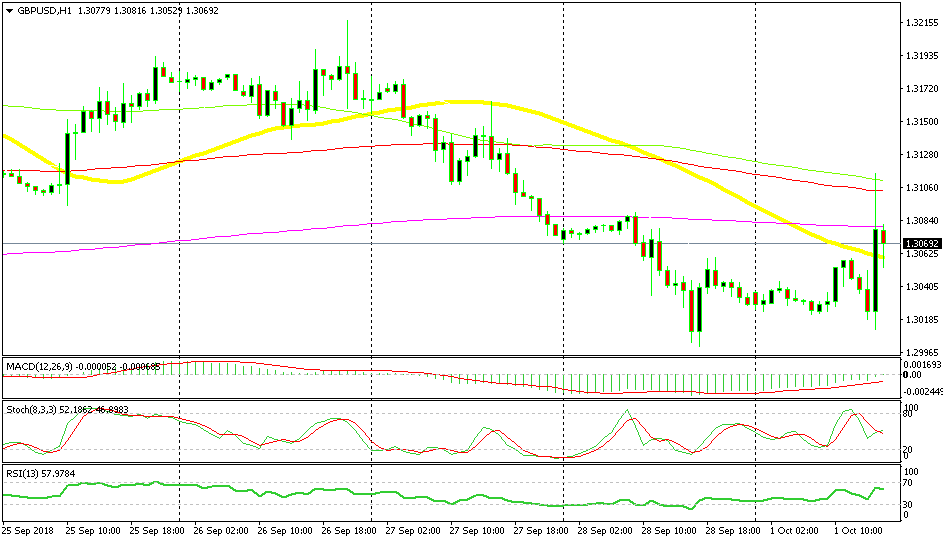 This is not a signal per se but more of a chart setup which we used for our GBP/USD sell signal which we opened earlier on and which hit the take profit target a while ago, before the jump on Brexit rumours.

As you can see from the GBP/USD H1 chart, we sold this pair when it was retracing higher this morning. It found resistance at the 50 SMA (yellow) and stochastic was overbought so we decided to go short since the trend is down. We booked profit on it already, but there might be another case for sellers now since moving averages are again providing resistance.

The market sentiment has improved today after the deterioration last Friday. Stocks are making new highs for the day while the CAD continues to surge higher on NAFTA/USMCA trade agreement which will likely be officially declared soon. The GBP is still too dangerous to trade but we got a handful of pips from it already so we will leave it out for today.