US Session Forex Brief, Jan 30 – Hanging on the Sidelines Ahead of the FED Meeting - Forex News by FX Leaders

US Session Forex Brief, Jan 30 – Hanging on the Sidelines Ahead of the FED Meeting

All eyes on the FED meeting today

Today is that time of the month again when the Federal Reserve meets to discuss the economic outlook and they decide on interest rates. For this reason, the financial markets have been pretty quiet today. Although, Brexit doesn’t let things get too boring. Yesterday, the British Parliament passed some of the amendments which diminish the chances of a no-deal Brexit.

On the other hand, it means that the UK government will ask for an extension of Article 50. This seems like a positive outcome, but it also stretches the period of uncertainty further which is bad for the British economy and for investment. Hence the 150 pip decline in GBP/USD yesterday in the evening. Although, the European and Irish officials repeated today that the Brexit deal won’t be renegotiated, so no one knows how this will end up.

But the price action overall has been pretty quiet as the FED meeting approaches. The FED sounded less hawkish in their last statement in December after hiking interest rates for the fourth time last year. That gave the market a reason to think that the FED will be less aggressive with interest rates this year.

The press conference from chairman Powell, as well as comments from other FED members, have assured markets that the FED will slow the pace of rate hikes this year and right now the markets are pricing in two rate hikes for this year. But, nothing is too certain in forex, and traders are staying on the sidelines today to see if the FED will confirm this view or whether they will sound less dovish today, which would give the USD some support in the near term. 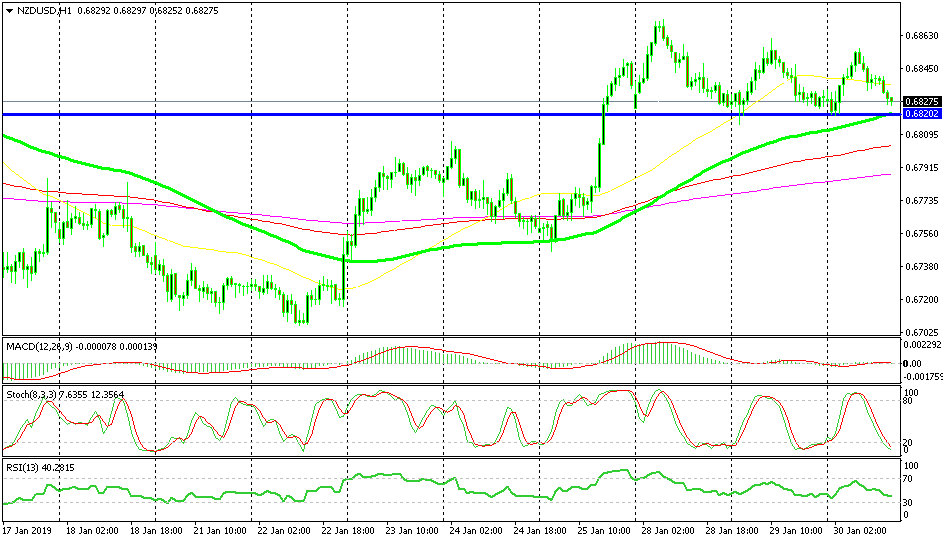 NZD/USD made two strong bullish legs last week, first when the inflation report from New Zealand came out and again on Friday during a strong wave of USD selling. Today, the inflation report sent the Aussie higher which pulled this pair up as well. During the European session, NZD/USD has retraced lower but the retrace is almost complete now as stochastic tells us while the support at 0.6820 should hold, especially since the 100 SMA (green) has moved higher to that area. So, once this pair reaches that level, I will look to open a buy signal.

The market is making a move now as I am about to post this brief. USD/JPY has climbed around 30 pips higher, but that’s not a run for safe havens since risk currencies are also declining. This looks more like a wave of USD buying. With the FED meeting coming up, we will likely see some position adjustment from forex traders, so these kind of moves are normal.