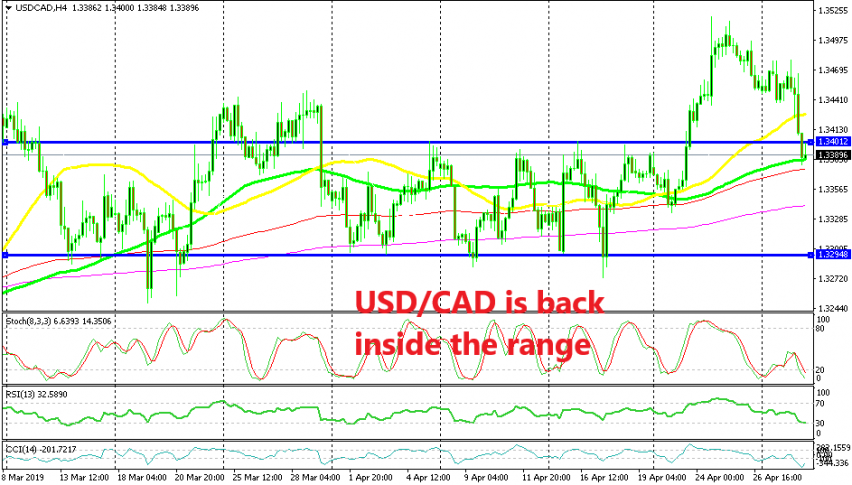 USD/CAD Trend in Danger After the Break of Previous Resistance

The decline in crude is not helping USD/CAD

USD/CAD traded inside a range for nearly two months. The range was around 100 pips wide with the bottom area of support at 1.33 and the resistance at 1.344 at the top. It resisted well for quite some time and it was pretty easy to trade, so I hope you made some profit there as we highlighted this range a few times back then.

But the range was broken to the upside last week as Crude Oil lost a few bucks, despite the US threatening to remove waivers from Iran’s sanctions, meaning full sanctions. Buyers pushed the price to 1.3520, so besides the break of the range, the big round level at 1.35 was broken as well.

Although, towards the end of last week and this week so far we have been seeing this pair retrace lower. Seemed like the retrace might have come to an end as the stochastic indicator became overbought and is now turning higher, while the 50 SMA (yellow) provided support. The first candlestick which touched this moving average closed as a hammer, which is also a reversing signal.

Yesterday’s Canadian GDP report showed yet another decline for February and Oil is bearish, but the CAD turned bullish and USD/CAD broke back down inside the range. So now the trade is simple once again – buy at the bottom of the range and sell at the top, although the top level has weakened now and I wouldn’t count too much on it.