On Friday, President Donald Trump gave a bearish push to the dollar through making a comment that the United States had a very powerful dollar and he said the euro was not doing so well. President Trump also pointed out China for a yuan that he said was very low. Trump has charged repeatedly that other countries are working to keep their currency values low to gain a trading edge in international markets. The coming week is going to be one of the busiest from fundamentals and trading viewpoints.

The upcoming week brings a load of top tier fundamentals from all over the globe. In particular, the US FOMC, BOJ & BOE Policy decision, and the US Nonfarm Payroll remain on the top. Let’s get prepared for the coming week.

It’s just another typical Monday with no significant activity. However, investors will be trading the market over sentiments. Looking at the forecast of NFP, it appears that the economists are anticipating negative labor market reports from the United States. Whereas, the Federal Reserve is also widely expected to cut the interest rate. Thus, investors are likely to take sell positions in gold to get the maximum benefit of the news.

Nonetheless, the Japanese unemployment rate and prelim industrial production will be in focus to capture any price action in JPY.

On Tuesday, we can expect some excellent opportunities in the US denominated currency pairs, including the bullion market.

The Bank of Japan meets next week and there is no BOJ consensus on the next move. As per the Bloomberg survey, approximately a third of surveyed economists anticipate the Bank of Japan to extend its pledge on projected interest rates at next week’s meeting. 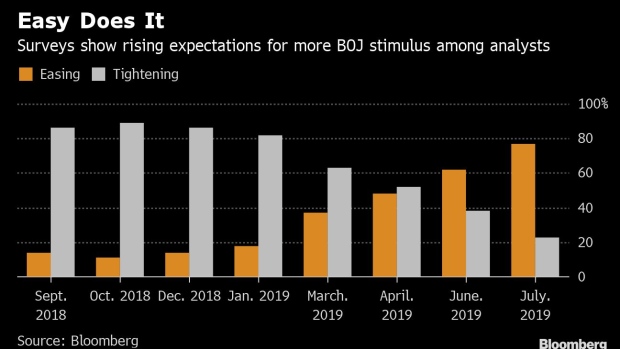 As you can see on the histogram above, some 77% of 47 analysts predicted that the BOJ’s next policy move will be additional easing, up from 62% last month amid a global economic slowdown.

Later this week, the Fed rate cuts could also put higher pressure on the yen, intimidating corporate profits, business sentiment and the BOJ’s attempts to produce inflation, appending another dimension to the demand for some kind of action. This action is most likely to result in a rate cut by the Bank of Japan.

CB Consumer Confidence will be monitored by the investors as this data will be of high importance on Tuesday because it usually causes sharp tradeable volatility in the market. It’s expected to be 125.2 vs. 121.5, giving us a reason to support bullish Dollar.

It’s going to be the second most important day after Friday this week as the US Federal Reserve will be releasing the FOMC statement and interest rate.

The US economy is experiencing its longest expansion on record, but weaker external demand and trade tensions are risks to the outlook. A benign inflation backdrop allows the Federal Reserve room to offer support and cut rates by 25bp next week

This data provides an early look at employment growth, usually 2 days ahead of the government-released employment data that it’s designed to mimic. Source changed series calculation formula in Feb 2007, Dec 2008, and Nov 2012, to better align with government data.

Economists are expecting a slight improvement in data from 102K to 150K in the month of July. The dollar may have no reaction to this release, as traders will be saving their bets for the Fed rate decision.

Typically, the market exhibits fragile trading volume and volatility ahead of the big day as the investors try to save their shots ahead of the NFP. Yet, the Sterling pairs will remain in highlights on the release of Inflation report and BOE Monetary Policy decisions.

At 11:00 GMT, the Official Bank Rate rate will be monitored. The odds of a rate change are almost 0%. BOE is widely expected to keep the rate on hold at 0.75%. The Bank of England is still on course to raise interest rates, had it not been for the high level of uncertainty due to Brexit.

So what’s there for us to trade?
Well, my friends, it’s the MPC Official Bank Rate Votes. The BOE MPC meeting minutes include the interest rate vote for all MPC members during the most recent meeting. The division of votes presents an insight into which members are shifting their stance on interest rates and how likely the committee is to determine a rate change in the future. For the moment, the votings are 0-0-9, which means that all the members are expected to vote to hold the rate.

The US NFP (Nonfarm Employment Change) and the unemployment rate will remain under the spotlight. Both of these economic data sets will be monitored at 12:30 GMT. NFP is expected to be negative at 160K vs. 224K during the previous month.

Whereas the unemployment rate is likely to stay unchanged at 3.7% and the Average Hourly Earnings are expected to rise by 0.2% vs. 0.2% previously. The weaker data will offer an opportunity to short the Greenback for a quick 60-100 pips and vice versa. 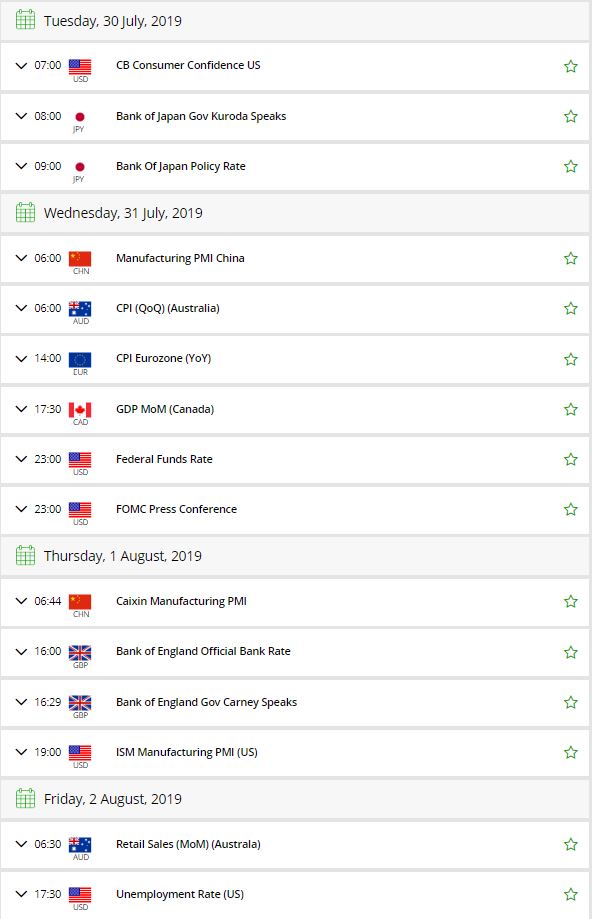 That’s all for now, but stay tuned to our economic calendar for the live market updates and forex trading signals. Good luck!