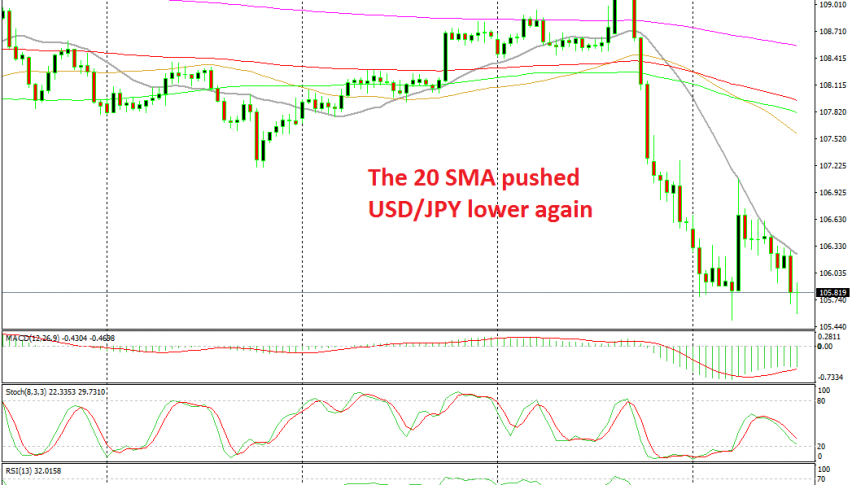 USD/JPY buyers tried, but the 20 SMA won the battle

USD/JPY was on a slight bullish trend during July and it made a final jump on Wednesday last week following the 25 bps rate cut from the FED. But, it reversed down the day after when US president Donald Trump announced more tariffs on China which turned the sentiment negative immediately.

The phantoms of the trade war returned again after some positive comments following the last G20 summit and markets turned extremely bullish on safe havens. As a result, this pair turned bearish and lost nearly 400 pips from top to bottom, while Gold has been surging higher since then and today it broke above $1,500, reaching $1,510 a while ago.

Although, yesterday we saw a 150 pips retrace higher in USD/JPY after some positive economic figures from Asia early in the morning. But, buyers stopped the push when the price reached the 20 SMA (grey) on the H4 chart. We opened a sell signal from the 20 SMA which closed in profit, but the decline was gong to be larger than that.

The 20 SMA has been providing resistance for a few session and has pushed the price lower. A while ago the USD turned bearish after Trump tweeted abut the FED being hawkish when other majors central banks are cutting rates. As a result, the downside has picked up momentum and now this pair is heading for last week’s lows. So, this moving average turns into a good place to sell USD/JPY now and we might pull another trade from there if the price climbs to the 20 SMA again.