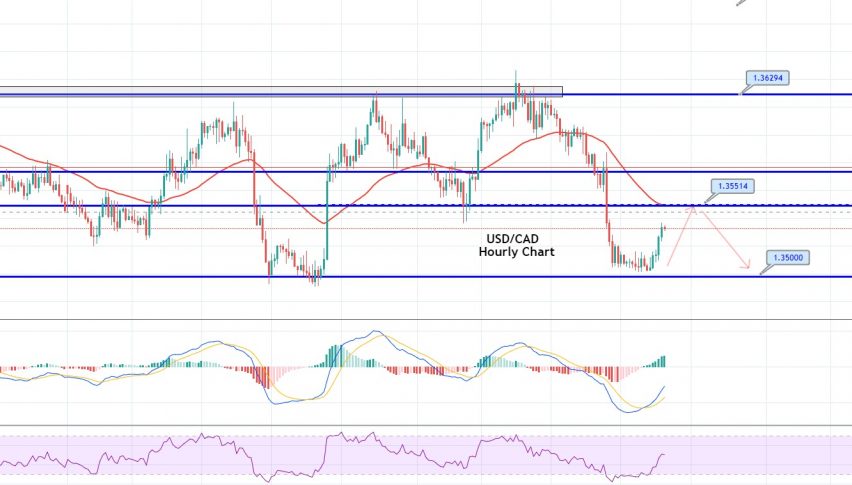 The USD/CAD pair closed at 1.35087, after placing a high of 1.36178 and a low of 1.35045. Overall, the movement of the USD/CAD pair remained strongly bearish throughout the day. The Loonie gained on Wednesday, after the Bank of Canada held its interest rates unchanged, stating that the slump in the Canadian economy was not as bad as feared. The bank expected the economy to contract by 15% in the first half of this year. Besides this, the Bank of Canada also expects to see a strong rebound in jobs and output.

On Wednesday, the Bank of Canada kept its rates unchanged at 0.25%, and the new governor of the BoC, Tiff Macklem, said that the rates were at the effective bottom, so the first part of his term will focus on all alternative measures. The Central Bank pledged to continue its bond purchasing, in order to keep rates low across the yield curve and support lending activity. Tiff Macklem said that the Bank of Canada would continue its large scale asset purchasing program of Government of Canada bonds, at a pace of at least 5 billion dollars per week.

The Monetary Policy Report from the Bank of Canada suggested that the number of new COVID-19 cases has fallen sharply from its April’s high, and the economic recovery has begun in all provinces. The Bank of Canada expected a sharp rebound in economic activity in the reopening phase of the recovery. However, the recovery will be followed by uneven phases across the regions and sectors.

The economic outlook and monetary policy statement by the Bank of Canada gave strength to the Canadian Dollar, dragging the USD/CAD pair towards the lowest level in four days. Apart from the Bank of Canada statement, Loonie was also supported by the rise in crude oil prices on Wednesday. The crude oil prices crossed the $41 level on Wednesday, amid the drop in US crude oil inventories last week. The EIA Crude Oil Inventories Report for last week dropped by -7.5M, against the expected -1.3M, lending support to the crude oil prices. The rising crude oil prices, in turn, strengthened the commodity-linked currency, Loonie, thereby dragging the USD/CAD pair further towards the downside.

On the US front, the US dollar was under pressure on the broadside, despite better-than-expected US economic data. Industrial production, import prices, and the capacity utilization rate increased by 5.4%, 1.4% and 68.6% respectively on Wednesday. The US dollar was under pressure, due to the downbeat economic outlook, after the rising number of coronavirus cases and increased risk-on market sentiment. This also added to the losses of the USD/CAD pair on Wednesday.