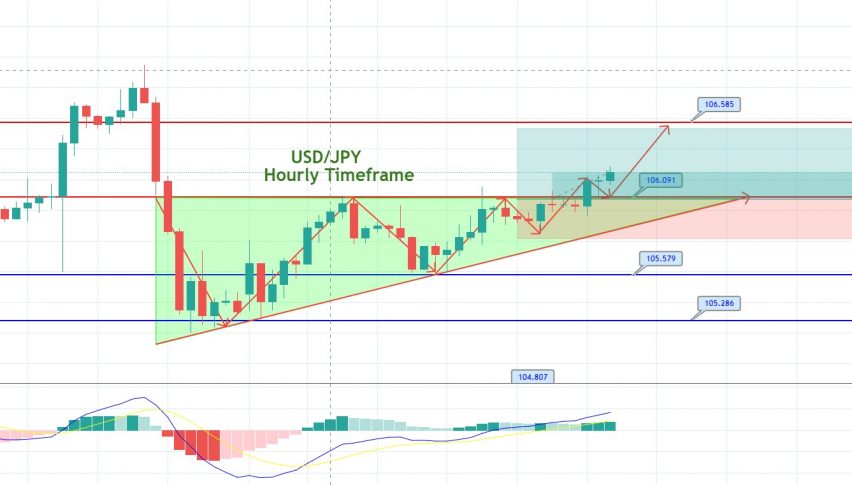 Today, in the early European trading session, the USD/JPY currency pair stopped its overnight losing streak and took a U-turn from the bearish track, turning bullish at above the 106.00 mark, mainly due to the fresh strength of the broad-based US dollar, buoyed by the upbeat US economic data, which eventually heightened the hopes of economic recovery in the US, leading to the risk-on market sentiment. However, the upbeat market sentiment undermined the safe-haven Japanese yen and contributed to the gains in the pair. In the meantime, the risk-on market sentiment was further bolstered by the hopes of a coronavirus vaccine, which also helped the currency pair. On the contrary, the uncertainty concerning the Japanese leadership and the US aid package keep changing the risk-on tone, which might give some support to the currency pair, by underpinning the safe-haven demand in the market.

Currently, the USD/JPY currency pair is currently trading at 106.06 and consolidating in the range between 105.86 and 106.13. Despite concerns about the fears of the escalation in the Sino-American tussle and the uncertainty concerning the Japanese leadership and the US aid package, investors continued to cheer the upbeat data from the US, China and Japan. It is worth reporting that the upbeat economic data from the key countries instantly fueled hopes that the global economies are stepping toward the recovery track, which will eventually keep the market trading sentiment positive.

On the data front, August’s ISM Manufacturing Purchasing Managers Index (PMI) increased to 56, against July’s reading of 54.2 and the forecast of 54.5. A surge in new orders caused the index to climb to a multi-year high. On the China front, the Caixin manufacturing PMI for August increased to 53.1 from 52.8 in July. Likewise, Japan’s manufacturing PMI rose to 47.2 in August, from the previous 45.2.

The broad-based US dollar took bids from the two-year lows on the day, as US data pointed to firm manufacturing activity. However, the US dollar gains seem rather unaffected by the upbeat market tone, and it is holding its gaining streak, at least for now. Thus, the modest gains in the US dollar could be considered the major factor that is keeping the currency pair higher. Meanwhile, the US Dollar Index, which measures the greenback against a basket of 6 major currencies, had risen by 0.03%, to 92.362, by 12:33 AM ET (5:33 AM GMT).

The US dollar has been dropping since last week, falling almost 1% after the Federal Reserve adopted the average inflation and higher employment strategy. The Fed’s shift in policy provided leeway to keep US interest rates lower for longer, which urged traders to sell the greenback.

Moreover, the upbeat market sentiment is drawing support from the hopes of a coronavirus (COVID-19) vaccine, which were triggered after reports that the front-runner pharmaceutical companies, like AstraZeneca, are ready to start their final trials.

On the contrary, the long-lasting tussle between the world’s two largest economies remained on the cards, as portrayed by US Secretary of State Mike Pompeo’s latest comments. The uncertainty concerning the Japanese leadership and the US aid package also stopped the bulls, which could be considered as the key factor that has capped further upside momentum in the currency pair.

The traders will also keep their eyes on the US ADP Employment Change for August, which is expected to come it at 950K, against the previous 167K. Across the pond, the major comments from the BoJ’s Wakatabe will be key to watch.

The USD/JPY currency pair is trading with a bullish bias, especially after violating the ascending triangle pattern at the 106.090 level. A bullish engulfing candle may drive sharp buying in the USD/JPY pair, until the next target level of 106.585. The MACD is supporting the buying trend, along with the 50 EMA support. Let’s consider taking bullish trades over the 106 level today. Good luck.

Daily Brief, November 26 - Everything You Need to Know About Gold Today!
5 hours ago

Forex Signals Brief for Nov 26: ECB in Focus
10 hours ago