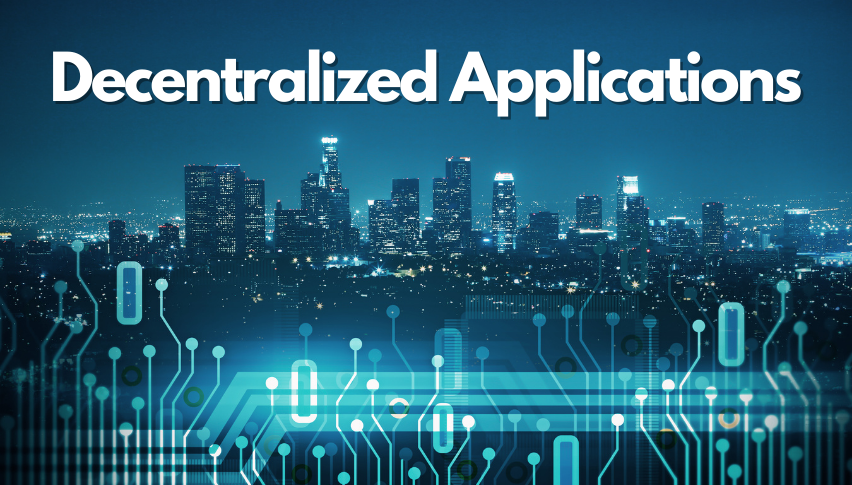 Nowadays, everyone has a smartphone, and each of these smartphones run various “Applications” or “Apps.” An app is a digital tool that runs different kinds of programs, such as social media, messaging, banking, games and work stuff. All of the applications run on the operating system of your smartphone – usually Apple or Android. Similarly, your PC or laptop has programs and applications that run under either the Microsoft or Apple operating system.

In the cryptocurrency space, these applications are called “dApps” or “decentralized applications.” These are applications that are built according to blockchain technology, rather than the operating system of a smartphone or PC. These dApps are permissionless, trustless and transparent, unlike traditional applications, which are usually controlled and monitored, and which may abuse the users’ privacy.

“dApps” are developed through code, to create smart contracts in the blockchain. Instead of a single computer running the program, because it is built on blockchain technology, it is run by a network of hundreds and thousands of computers around the world. “dApps” can only be programmed and run in smart contract networks, like the Ethereum blockchain. Bitcoin cannot do this, because it’s sole purpose is cryptocurrency.

What are the advantages of dApps?

Since dApps are built on the blockchain, their code is essentially transparent. Practically, anyone can look under the hood and read the code of the dApps they are using. Unlike applications like Facebook or Google, which are hidden and controlled, you can look at the dApps code and see how the nuts and bolts work.

You may have experienced not being able to log into your banking app because they are doing routine monthly or quarterly maintenance. You may have seen Facebook or Instagram suddenly not loading new posts from time to time. Applications and programs are susceptible to going offline due to maintenance, and in extreme cases, they might even close down permanently.

You will never experience this with dApps, because they are built on the blockchain. Thousands of computers all around the world, that make up the blockchain network, would first need to go offline before this happens. Realistically, it would be virtually impossible to take down all of these computers.

dApps are also resistant to controls by outside factors. Since they are decentralized, no government or powerful institution can close them down. Just recently, we have seen China take down gaming companies and other innovative tech companies, along with their billionaire owners. We also have seen the overprinting of money by the US Federal Reserve, with the help of the US Department of Treasury, resulting in an inflationary environment in the country. The US dollar has been losing value continuously because of this. We also see the major social media networks, like Facebook and Twitter, banning controversial people outright, without due process.

None of these forms of control and censorship have any place in dApps. You are in control of what you want to do in the blockchain space. You are in control of your money, and the government cannot take it away or print more of the cryptocurrency that you are holding, because they have no power over it. There will be no banning of people from dApps, in the way that big social media platforms do today. Since dApps are built on the blockchain, they do not answer to any government, corporation or social media mogul. The environment is free from censorship and control.

Which blockchains can you build dApps on?

There are several smart contracts networks or blockchains where you can build your own dApps. Here are the top blockchain platforms:

This is the pioneering platform in the cryptocurrency space, which was created by the genius programmer, Vitalik Buterin. Most dApps you see today were built on this network, and as such, it is the most active and the most widely known. There is a large community of developers and users who have used the platform for a long time already, and as a result, it has built up a reputation of trust and reliability in the cryptocurrency space.

The Near Network is the next generation blockchain that is trying to overtake Ethereum. It’s objective is to be more scalable and faster than most blockchain networks. It boasts low transaction costs as well, and a flexible interface for faster dApp developments.

Solana has slowly become a darling in the cryptocurrency market, due to its high-performance blockchain network. Its technology can process thousands of transactions per second, at a fraction of the cost that Ethereum can offer.

You may have heard of NFTs or “non-fungible tokens” in the news, as they have surged in popularity this year. NFTs have entered the pop culture, with art leading the way. These NFTs are bought and sold in what we call NFT Marketplace dApps. These are simply marketplaces where you can buy, sell, create and mint NFTs. The most popular NFT marketplaces are Opensea and Rarible.

Decentralized Finance dApps have also emerged as a popular industry today. These dApps have created an entirely new digital and decentralized banking ecosystem in the blockchain. You can borrow, lend and stake your crypto using these platforms. You can become a provider of liquidity to liquidity pools, which is a way to earn interest, or you can simply invest and trade in various cryptocurrencies in decentralized exchanges (DEXs).

You may have heard of the sudden popularity of the game, Axie Infinity. It is an NFT-based play-to-earn game, where you can earn cryptocurrency by just playing the game. This is also a smart contracts dApp, which is NFT-based, but with a gaming utility. Similar games such as Cryptokitties, Splinterlands, Alienworlds and Mobox have risen to popularity, especially during the pandemic, when people were mostly in front of their laptops and PCs. Gaming dApps are a fun way to experience both blockchain technology and cryptocurrency.