Dogecoin (DOGE/USD) Breaks Above the Key Support. What Next? - Forex News by FX Leaders

Dogecoin (DOGE/USD) Breaks Above the Key Support. What Next?

Since the last days of October, Dogecoin (DOGE/USD) has failed to live up to the expectations of many of its fans. Since touching a local top of almost $0.34 on October 28, DOGE/USD has been trending lower, dipping to a low of slightly above $0.13 on January 10, 2022. The meme token has added moments of strength in the bearish market, with gains being followed quickly by lower dips. A break below the support at $0.169 on January 5, 2022, took DOGE/USD to the lowest level in more than eight months.

Nonetheless, DOGE/USD is now recovering, and it has posted gains of more than 7% in the last week. At the current trading price of $0.17, DOGE/USD has gained 11.60% in the last 24 hours. Although it is unclear what caused the sudden spike in DOGE/USD, speculations that Tesla will start accepting the meme token for a limited range of merchandise could have been behind it. We already know how much Tesla and its CEO Elon Musk – who is a fan of Dogecoin – influences the price of the token. Gains in the sister meme-token, SHIB/USD, on a potential Robinhood listing, could also have played a role, amid the improving crypto sentiment in the broader industry.

Now, DOGE/USD is trading above the $0.169 support, and buyers could be excited about where the meme token is heading next.

DOGE/USD – A Technical Outlook on the 4-Hour Chart 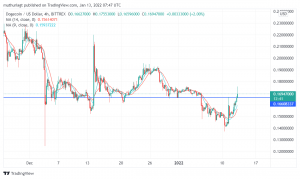 DOGE/USD Flips Above the Key Support

On the 4-hour chart, DOGE/USD is aiming to have successfully cleared the hurdle at $0.169. At some point, the token traded up to $0.175, and it could now retreat to the support. The 9-day and 14-day moving averages have joined to provide support, suggesting a potential developing bullish momentum.

In the past, DOGE/USD has been moved by social media mentions and top executives like Musk and celebrities. If Tesla does indeed confirm the rumors of the eventual acceptance of the meme token for its merchandise in the coming days, $0.169 would be a key turning point that will see the meme token go higher. This will underline Dogecoin as a token backed by strong fundamentals, rather than just a retail trading frenzy. Thus $0.169 remains the new level to watch for price action and a buy-entry point, if Dogecoin fundamentals are in its favor.

Still, we need to watch for the closure of the candle on the daily chart for a longer-term view of trading. 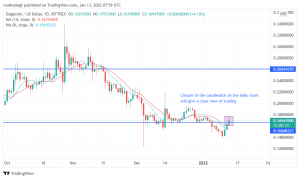 Looking at the daily chart above, a daily candlestick can be seen towering above the previous resistance of $0.169, which is now a support. However, we are not certain whether the candlestick will close up or down. If it closes below the support, it will create a bearish pin bar, raising questions about whether the token will claim higher levels under the current momentum.

Although DOGE/USD presents a buy opportunity after breaking above $0.169, waiting for the closure of the candlestick on the daily chart could shed more light on the next few days of trading. For now, I would wait and enter a buy trade if the candlestick on the daily chart closes above it. Fundamentals supporting the Dogecoin network could also add fresh bullish momentum from the current levels. Still, a short-term buy opportunity exists, as long as the support holds and the strong bullish momentum is maintained. Good luck!

Crypto Signals Brief for January 9: Gaining Some Momentum on Slowing USD
3 weeks ago