We already discussed ‘Candlestick Trading Strategy’ which allows us to understand the candlestick charts and what each candlestick indicates. But in order to really become a master of the charts, we must learn about a few common patterns that can be formed on the charts and what information we can draw from them about the future.

‘Head and Shoulders’ pattern is one of many recognizable and tradable chart patterns. In Forex jargon they are known as “Shampoo” because of the shampoo with the same name. They consist of a high peak in the middle and two double peaks on either side of that one as can be seen in the illustration below. The higher peak is the head and the two lower ones are the shoulders. The pattern itself looks like a head between two shoulders, hence the name.

Head and shoulders patterns are relevant when the neckline is broken. Once the neckline is broken, we may look to open the trade on the opposite side of the head and shoulders, which means we have to sell. Some traders enter immediately and some prefer to enter on a pullback and then retest of the neckline. The latter option is safer because now we know that this is not just a fake-out. The number of pips targeted in this strategy is the same as the amount of pips between the top of the head and the neckline, although we can't be completely exact. When the market is feeling right and there is more room to go after reaching the target, we might let the trade run, aiming for bigger profits. 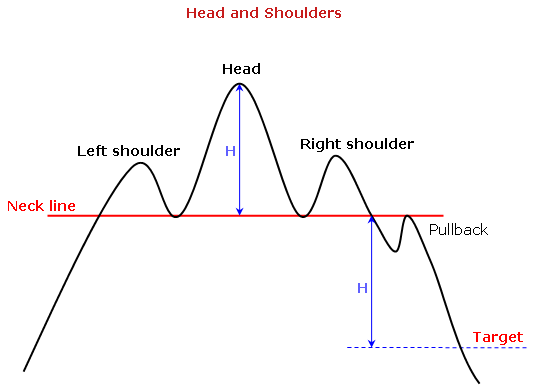 'Head and Shoulder’ pattern consists of one high peak (the head) and two lower peaks, one on each side (the shoulders).

Head and shoulders pattern forming on a typical candlestick chart.

The pictures above are very clear and allow for very clear recognition of the head and shoulders pattern. Don’t expect the real charts to be as clean, they will provide more of a challenge. To be able to trade these patterns we have to spot them on real time charts as they happen and not after they are no longer relevant.
The bottom line, which is called the neckline is actually a support level, and might not always be a straight line. It might be an ascending or descending line, which makes it much more difficult to spot. Therefore we have to see the bigger picture and junior traders should probably switch to a line chart which makes some patterns more visible, instead of the candle chart. The picture below is a real chart showing a head and shoulders pattern. Recognizing the head and shoulders patterns on real time charts and catching them in time is much more difficult than seeing them here in the illustrations.
As mentioned above, according to the trader’s textbook the neckline must be broken in order for this pattern to be usable. But real life trading doesn’t follow textbook rules so strictly. We have to be flexible and clever to spot these patterns early as they are forming, in order to minimize the risk and maximize the profits.
One trick which helps spot this kind of pattern early and make sure we are entering a high probability winning trade is to look at the volumes. No matter the timeframe, the volume is supposed to decrease with each peak, although keep in mind that this isn’t always the case. The lower volume on the second peak, which is the head, means that buyers had a try on the upside, but without much force behind it and the price eventually goes down.
When we are at the top of the second shoulder and the volume is low, we should check other indicators such as RSI and Stochastics to see if the pair is overbought. If that’s the case and if pins, dojis or inverted hammers are forming on the candlestick chart, then we might enter the trade with a stop above the head. This way we almost double the profit target and increase risk-reward ratio. The chart below illustrates the use of this strategy on an ascending head and shoulder pattern. 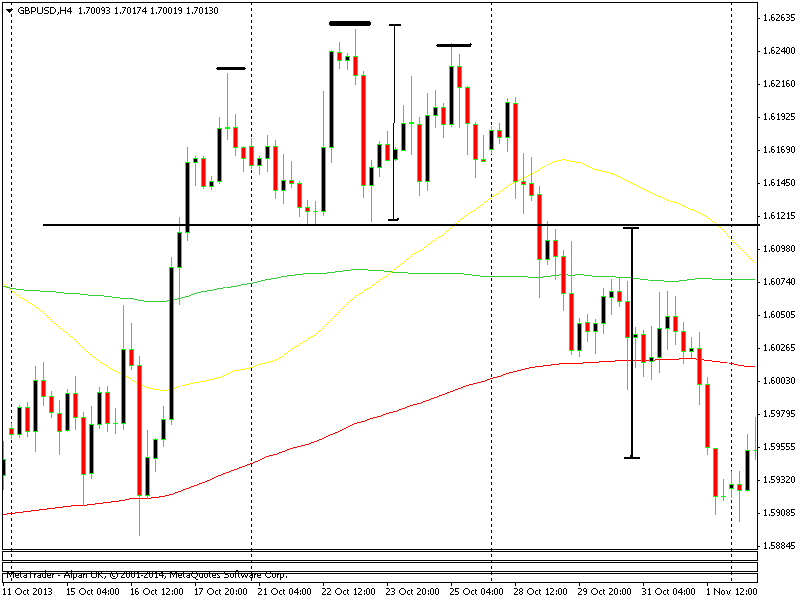 Volume decreases with every peak.

Head and shoulders patterns are not a Forex trading strategy on their own but they help us to get a better picture of what is going on and more importantly, what is going to happen next. Being able to spot these patterns can be the difference between a winning trade and a losing one. As you gain more experience as a trader, try incorporating as many of these techniques into your trading technique basket to gradually improve performance and make more money.
Check out our free forex signals
Follow the top economic events on FX Leaders economic calendar
Trade better, discover more Forex Trading Strategies
Related Articles
Comments
0 0 vote
Article Rating
Subscribe
Login
0 Comments
Inline Feedbacks
View all comments
6 Yrs
0
Signals
<% signal.pair %> <% signal.action %>
SL: <% signal.stopLoss %> N/A
TP: <% signal.takeProfit %> N/A
<% signal.status %>
Trade Now
Trade Now
<% signal.comment %>
See more
Closed Forex Signals P/L (Profil/Loss)
Economic Calendar
Tuesday, November, 30 2021
10:00GMT
CPI Eurozone (YoY)