The Presents Are Paid For – Weekly Analysis 19 – 25 November

It’s the holidays,  and I would like to wish all FXML readers and followers Happy Holidays. This is the time of the year to be grateful, and so we thank all of you guys for being with us throughout this year.

Sure, there have been some rough times this year but we made it through, accumulating some good profit with one week left until the end of 2016. We added some more pips to this year´s profit this week despite the irrational holiday market.

It was pretty quiet, which was totally expected with forex traders packed for winter holidays. Yet, the price action in most forex pairs was all over the place in whatever range they were trading, but we still managed to grab 92 pips from whatever was left of the forex market.

Knowing that forex traders close up shop for regular trading during the Christmas period, we expected a quiet and irrational market. So, we decided to employ a “hit and run” forex strategy this week.

You can´t pick trends when none are available, so the best thing to do in such times is to wait for a trading opportunity, execute the trade, get your pips, and forget about that forex pair until another opportunity arises.

That´s what we did and it resulted in a good strategy for this sort of market. Our forex signals this week were all short term because you cannot stretch a trade beyond its capacity, especially at this time of year.

We opened nine forex signals this week, two of which remain open, one hit stop loss while the other six were closed in profit. That gives us an 89:11 win/loss ratio and a 92 pip profit, which brings our monthly profit for December to over 300 pips so far.

One thing we can confidently say about a holiday market is that it´s not really a market. Most of the big names in this industry that make the market have already closed their books for the year, so all that´s left are the retail traders like us who try to pick a few pips here and there and maybe a few big cats closing their last positions and clearing their portfolios for the year.

So, the fewer the participants the less liquid a market is, and this fosters irrationality. You could see that by the price action in different forex pairs and still see it on the charts. There was no clear direction whatsoever and they all moved out of sync with each other.

The only currency which stood out this week was the Canadian Dollar. The Loonie was the only one to follow a trend but, surprisingly, it went against the oil. The CAD and oil have been very closely correlated for ages, but this week the CAD lost about two cents while oil closed near two-year highs.

This was another strange thing we have seen this week, but I don´t think we should look too hard into it. This is not a breakup of the CAD-oil correlation. It´s likely a position adjustment by the CAD trades who have been following oil. Oil traders who strictly follow trends kept the lines tight this week too, by pushing prices higher up, while CAD traders gave up following oil and closed their CAD long positions that sent USD/CAD higher.

So, in general, nothing really extraordinary happened this week. Strange price action but that´s what I expected since we´re around this time. I bet next week will be the same too.

No one really cared about the economic data this week, but it is our job to figure out what the numbers might bring up in the coming weeks before they are reflected in the forex market.

Most of the economic data was positive this week apart from US personal income and spending. The US labour market has been in a great place for quite a long time and the FED acknowledged it last week, but the wages have been very slow to follow the employment pickup or the pace of unemployment rate decline. This is the biggest drag for the US economy and I´m not sure if it will be overcome in 2017.

The US core durable orders posted a positive number, but the most outstanding piece of data this week was the final US Q3 GDP annualized.  It was revised 3 points higher to 3.5%, which will help the yearly GDP number.

The UK Q3 GDP was revised higher as well to 0.6%, but in this case, the yearly GDP was revised lower due to the lower second quarter GDP. In Europe, everything seems jolly with the EU current account coming out 4 billion Euros above the consensus, the Italian retail sales jumping 1.2% in November and the German import prices and business climate beating expectations.

Oil prices have been moving higher since the OPEC deal about a month ago, yet the Canadian Dollar has been sliding, with USD/CAD surging about 450 higher as you can see from the H4 USD/CAD chart. It´s not a divergence taking place, but a year-end position adjustment. Yet still, it´s worthwhile taking a look into this forex pair. 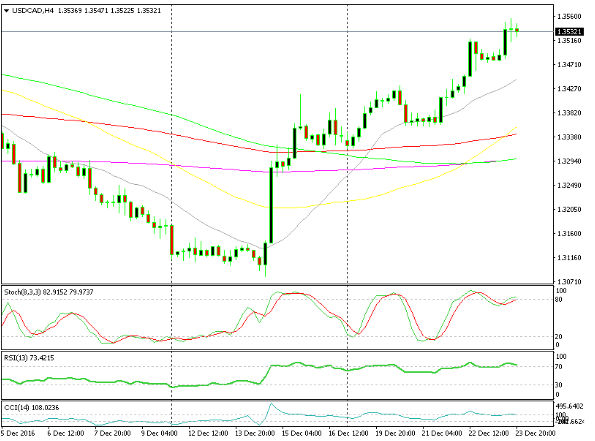 Can you spot the Elliott wave pattern?

As you can see from the forex chart above, the 200 pip move this week took unfolded in five waves. Three waves up and two corrections in between; that´s an Elliott wave pattern right there. Moving averages act perfectly as support levels during correctional waves, and the 20 moving average (20 MA) did just that this week during the first retrace.

The weekly chart below paints a pretty bullish picture. More than a week ago, the price got close to the 100 MA in green which has been providing solid support, only to reverse and end up 500 pips higher. All three technical indicators at the bottom of the chart are pointing up with plenty of room for the stochastic one until it reaches overbought levels. 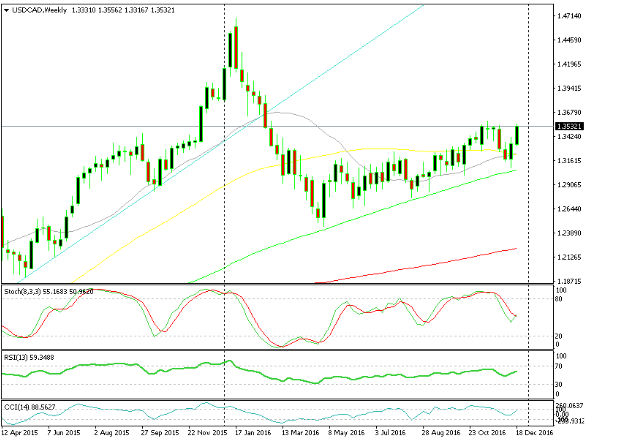 The 100 MA reversed the decline once again last week

The monthly chart, on the other hand, the stochastic indicator is already overbought which contradicts the weekly chart. According to this chart, in the following weeks or months will see this pair tumble lower, which falls in line with the oil analysis. Once the year-end USD/CAD position adjustment is over, the CAD buyers will become active again, but only if the oil uptrend continues. 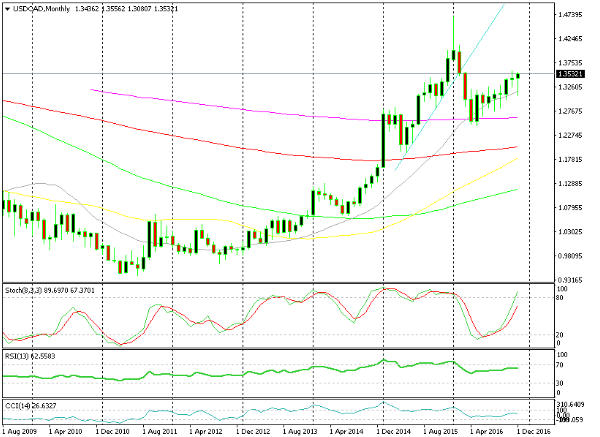 The monthly candle looks bullish but stochastic is already overbought

That was it for this week; the market was reduced to a few retail traders and some profit taking and position adjustment for year end. The ranges were tight and moves unexpected but we did what we had to do. We opened a few forex signals and took profit home as a Christmas present for ourselves. With New Year coming up this weekend, next week is supposed to be the same. The economic calendar is even lighter, so take it easy guys and prepare your forex strategy for next year.