The U.S. dollar finally managed to make it's way to the upside, despite the release of unfavorable economic figures from the United States. Even at this moment, the dollar is trading firm against the six major currencies as most investors are focusing on the FOMC meeting minutes ahead. Investors also increased their bet's on the greenback in response to the rise in U.S. treasury yields.

The rise in U.S. treasury yield demonstrates the "Risk On" sentiment. During this, investors feel confident about the economy and they invest in the equities and currencies, rather than safe haven assets. Let's have a look at the major economic events for today.

Yesterday, in the early Asian trading session, the EUR/USD traded bullish in response to the bullish remarks by German Chancellor Angela Merkel. She had said that the single currency is "too weak" due to the accommodative monetary policies of the European Central Bank (ECB).

The EUR/USD pair plunged due to the lower than expected economic data from the United States. The U.S. new home sales (569K) dipped by 11.4% for the month of April. The figure wasn't only below expectations (611K), but also below the previous months' figure (642K).

In addition, almost all of the Eurozone's economic figures beat the expectations. Specifically, the Eurozone PMI manufacturing reading advanced to 57 from a final figure of 56.7 for April. Investors got another reason to trade the Euro with a hawkish sentiment, as better than expected figures put pressure on Mario Draghi to opt for contractionary policy.

As discussed earlier in the Forex Signals Brief for May 23rd, the EUR/USD plunged sharply and achieved our take profit level. However, today the market is likely to remain highly volatile due to FOMC meeting minutes. 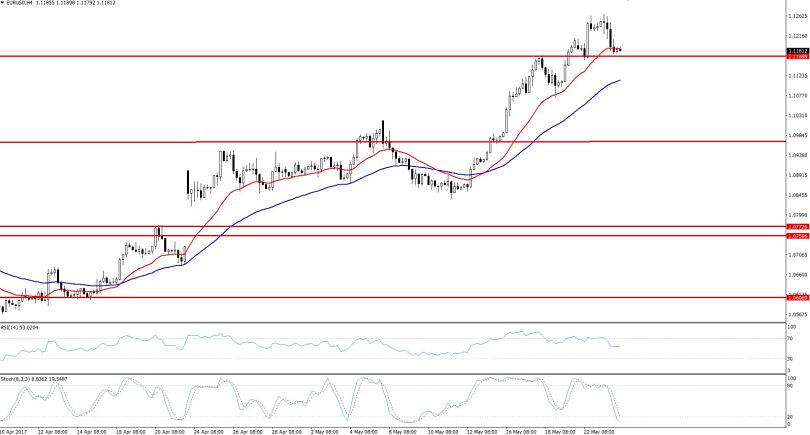 As we discussed in the Forex Signals Brief for May 23rd, both of our momentum indicators, the RSI & Stochastic were trading above 70 & 80 respectively, suggesting that sellers were looming around the overbought zone.

In light of this, the EUR/USD fell below $1.1267, and until now, the pair has completed 38.2% Fibonacci retracement at $1.1190 in the hourly chart. The RSI and Stochastic have come out of the overbought trading zone, which means that the market is ready to take a bullish wave if triggered by fundamentals. In addition, the prices are still holding above the 50-periods EMA, demonstrating investors' bullish bias.

Most importantly, the bearish engulfing candlestick pattern on the daily chart is negating investors' bullish sentiment. Thus, the breakage below $1.1160, is likely to open further room for selling until $1.1100 & $1.1060.

The market is likely to trade muted in the Asian session as investors are waiting for the major economic release – the U.S. FOMC meeting minutes which are due to be released at 18:00.

Personally, I'm not expecting anything new from the Fed officials. However, even the unchanged monetary policy has the potential to shake to the whole market. So buckle up for the ride.

Forex Signals Brief for September 28: More FED Speakers and US Data to Keep the USD Up
15 hours ago