Most markets have been really bullish today

Financial markets have been quite uncertain this week, with the sentiment shifting from positive to negative from one session to another and vice versa. Most financial assets have been trading in tight ranges, with commodity currencies bouncing up and down while stock markets were trying to make up their mind until this morning whether to turn bearish on large time-frames or to remain bullish.

Today, stock markets have made their mind up and they are running higher as the sentiment has improved considerably. Risk currencies have been climbing higher pretty fast during the Asian and the European session, while safe havens are sliding lower. Although, we had a sign yesterday that the sentiment was about to turn positive as GOLD had a really bearish day, while USD/JPY ended the day around 80 pips higher.

Today everything looks great as the sentiment remains buoyant with risk assets pushing further up. One of the reasons for this improvement in the sentiment was the Chinese data this morning, especially the trade balance, which jumped higher. This is making traders think that the slowdown of the Chinese economy should be over, which would also help the global economy that is also slowing down. But if you look at the details of the trade report from China, you see that the exports have increased by 1.4% on an annualized basis but imports have declined by 4.8% which shows that the Chinese consumption and the domestic economy are continuing to decline. But, markets see what they want to see and everything is running higher apart from safe havens. 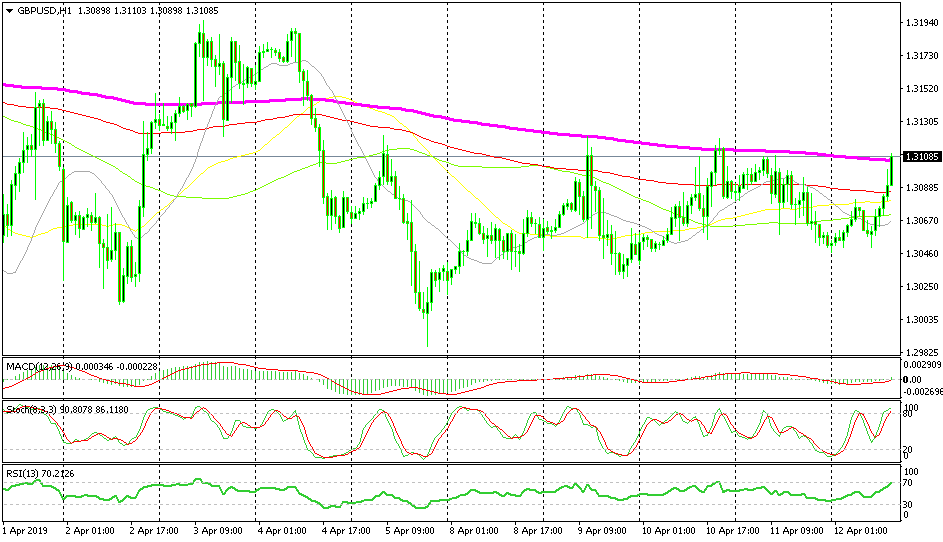 A while ago, we decided to go short on GBP/USD. This pair has been trading in a range all week bouncing up and down. Right now, the price is near the top of the range and the H1 time-frame is overbought. The 200 SMA (purple) has also been providing resistance all week, so it seems like GBP/USD might reverse down from here. The 100 SMA is standing at these level on the H4 chart so that should add some more strength to the resistance are above.

The USD continues to get beaten up across the board today as the risk sentiment continues to improve. The Japanese Nikkei has made new highs for this year and other major indices are threatening new highs. This looks dangerous for both sides since the Chinese data doesn’t show such a bearish picture and the buyers should be cautious, but at the same time, it’s the end of the week and markets behave strange some times on Friday, so beware guys.