Yesterday, most of the markets were sort of uncertain which direction to take, after risk assets were bullish last week, as sentiment improved in financial markets. Today we are seeing a mix of both – last week’s price action as well as yesterday’s price action. Forex remains pretty much the same as yesterday without clear direction as uncertainty prevails.

Risk currencies have retraced higher in the last two weeks since they were oversold two weeks ago, but now traders are realizing that there’s really no reason to keep buying them. We saw some green shots from the Eurozone and Chinese economic data last week, but that’s just a spark in a dark sky. Several European Central Bank (ECB) members doubted the assumed economic rebound in Q2 of this year and they might be right as most economic indicators still point down in the Eurozone.

Stock markets have resumed last week’s uptrend after trading water yesterday. The German DAX is making new highs for the year and it is at the highest levels since September last year, while SPX is threatening all time highs, trading just 40 pips below record highs. I bet Donald Trump is loving this. The GBP is sliding lower despite the positive employment report, which showed that earnings are increasing at great speed. 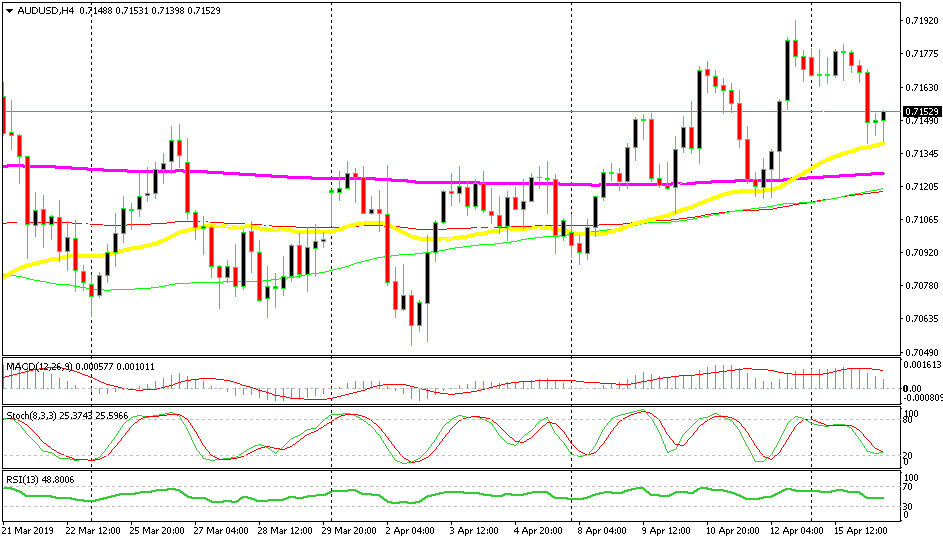 The 50 SMA has now turned into support for AUD/USD

AUD/USD has been trending higher in the last two weeks and the 200 SMA (purple) turned from resistance into support last week. But this week it seems that the 50 SMA (yellow) is doing its job in providing support as this pair reversed higher from there. The price formed a doji candlestick after the pullback down and stochastic was oversold as well at that time, which was the perfect setup for a bullish reversal. The reversal higher is underway now so this pair is pretty bullish.

The sentiment has improved in the last couple of hours and stock markets continue to crawl higher. Although, forex pairs still look uncertain apart from the Aussie which made a quick bullish reversal as explained above. The GBP has tumbled lower on more Brexit rumours, but we and the GBP are used to this now, so I expect another reversal in the GBP in the coming sessions.