Just before we dive into the UK lending data, let´s take a quick look at the GBP/USD. If you look at the hourly forex chart for this pair below, you can see the quick 170 pip move yesterday. The price in this forex pair fell through an air pocket from 1.2250s to 1.2080 in a couple of hours. However, it immediately reversed and got back up as quickly as it declined. 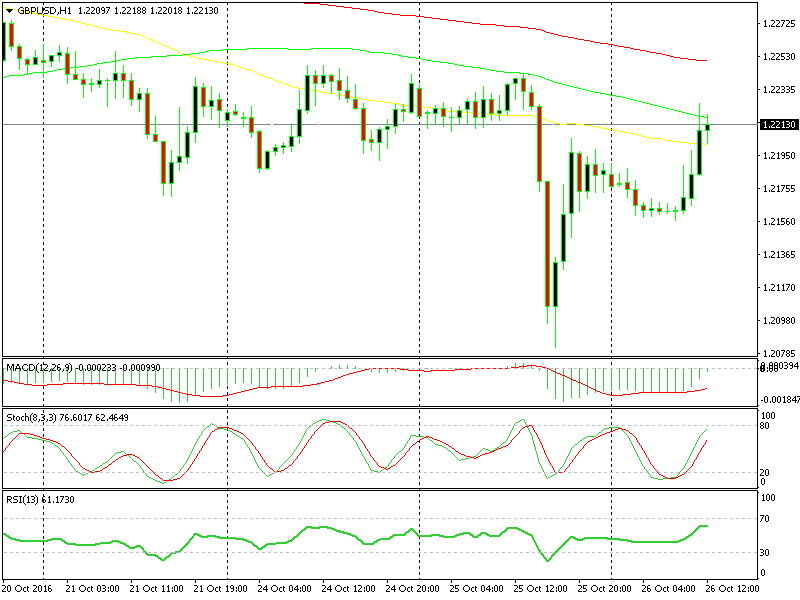 The 100 SMA has provided solid resistance so far.

What does this tell us about this pair?

First of all, we can confidently say that the 1.2080-1.21 area offers good buying opportunities, since it has turned into a strong support level. The price just stalled at this level after the unexpected fall and a quick jump followed suit, which tells us that the buyers are quite crowded down there, waiting to jump in, hence, the 120 pip reverse.

We can also say that the area around 1.2240-50 has turned into a strong resistance level as well. It has topped this forex pair in the last three trading days, aided by the 100 simple moving average (100 SMA) as too on the hourly forex chart. The 100 SMA has slid lower today to 1.2215-20 so the resistance is pushing lower, too.

That´s the reason we opened a GBP/USD sell forex signal a little while ago. The stochastic indicator reached overbought levels also, which reinforced our selling bias at that price. That trade is about 15 pips in profit as I type, so that looks great for now. The GBP pairs have been extremely volatile recently, so targeting a few pips now and again with tight stops seems the reasonable way to trade it at the moment.

Well, the mortgage approvals jumped from around 37k to 40k in September. The net lending increased as well to above 2 billion GBP from around 1.8 in August. Credit card lending surged by nearly 40 million GBP but the net lending to non-financials posted a huge decline.

Leaving the last element of the UK lending data aside, the report seems quite solid. It shows that people are not really that worried about Brexit. After all, life goes on. Young men and women leave their parents and move out and young families get larger with newborns, so taking advantage of low interest rates to buy new homes is not a bad idea.

The BBA (British Bankers Association) said that the August rate cut by the BOE was the reason behind this surge in mortgage approvals, which is the highest since 2006.

But on the other hand, the interest rates won´t stay low forever and that´s the biggest danger the low rates hide underneath. That´s what caused the US housing bubble to burst about a decade ago, which brought the global financial crisis afterward.

By the way, on our next update, we will go into details of the dangers of low interest rates with a couple of examples to explain how low rates can turn into a disaster.

GBP/USD Slips Under 50 EMA - Buy Now Above $1.2125?
12 hours ago
Can GBP/USD Keep the Bullish Momentum Going As It Pushes Above the 200 Daily SMA?
GBP/USD has been really bullish since the reversal at the end of September, gaining 20 cents, but can it continue much further?
2 days ago