Hello again from the FXML team this Sunday evening. Before we start the weekly analysis, I would like to wish a happy Thanksgiving Day to all our US followers. From what I know, people celebrate this day to be thankful for a fruitful and prosperous year.

If you´ve been following us for a year, then this must be the case for you since we have made more than 3,000 pips during this time. By the way, Black Friday seems to have gone pretty well as the stores in the US and most of Europe were “looted” by bargain hunters. Hopefully, this will have a positive effect in the US and EU retail sales for October, so we must keep this in mind next month.

This is the last Sunday of autumn. Winter will be here in a few days, although it already feels like winter as temperatures dive below 0 degrees in most of Europe and floods have swept the continent. It feels pretty warm, though, when you end up with a good profit as we did this week.

We had the third consecutive winning week of the month, making 185 pips and bringing our monthly total to above 500 pips, so there is no winter in sight here at FXML headquarters. As for the market, it kept the same sentiment and trend as in the past two weeks with the Buck being in broad demand once again and USD/JPY pushing another 350 pips higher.

The OPEC meeting also took place this week in Vienna. The expectations were for a quick deal on production freeze/cut, but as we have often mentioned before, nothing is that straightforward when it comes to oil production. This week´s meeting is over and no deal was reached; instead, cracks are appearing a long way. Anyway, we´ll to wait what next week brings for the oil industry. 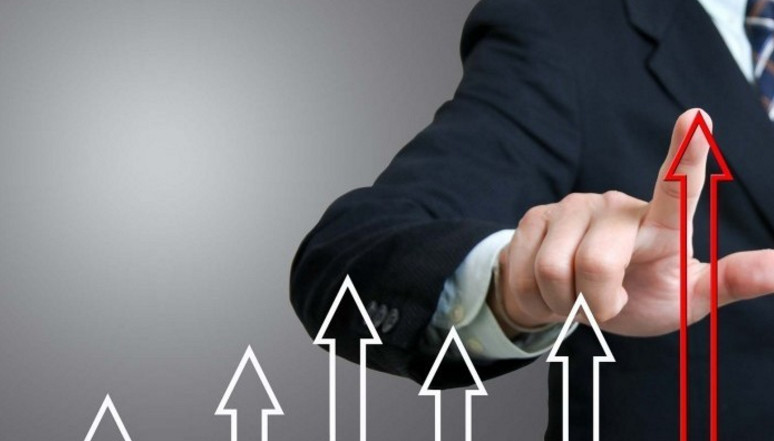 Our account balance grows as the year inches toward the finish

Following the US elections, in the previous two weeks, the forex market has been completely subject to market sentiment. Well, the same sentiment continued this week as well, albeit with less impact on the financial markets.

We got used to this trading environment and kept the same forex strategy. It has worked pretty well for the past two weeks, so why change it? The strategy consists of waiting for USD pullbacks and then going for the kill once the technical indicators reach oversold levels in the smaller timeframe charts. I say smaller timeframes because the USD uptrend has been so strong recently that the market couldn´t push major currencies more than 100 pips higher against the Buck.

I had the idea that most of our profit came from the EUR/CH signals, but looking at the signals report I see that the preferred forex pair for us this week was EUR/USD. We opened six forex signals in this pair, all of which hit the take profit target.

The 1.0640-50 level in this forex pair provided solid resistance during the first part of the week and the 100 simple moving average (100 SMA) in the hourly EUR/USD chart which was hanging around added extra strength to that resistance level.

So, we leaned against that level for our EUR/USD shorts and had three winning forex signals on Monday and Tuesday. As the week progressed we opened another three forex signals in this pair, all of which were closed in profit so we ended up with 145 green pips from this forex pair.

In total, we made 185 pips this week from 14 forex signals. We only had two losing signals, which brought our win/loss ratio to 86:14.

As mentioned above, we did pretty well in EUR/CHF this week too. We opened three buy signals around the 1.0720 area where the SNB (Swiss National Bank) was spotted interfering in order to keep their currency under control. 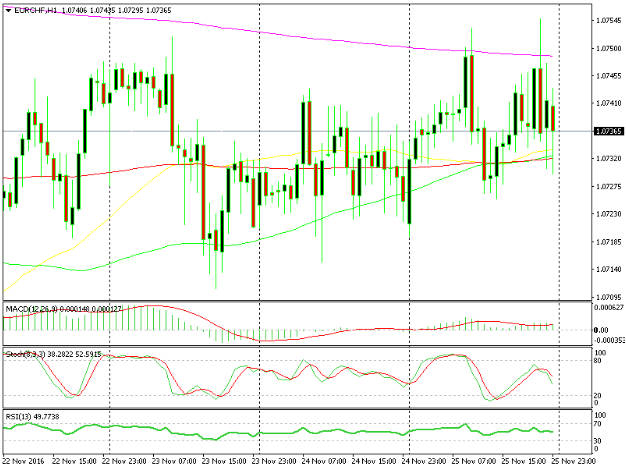 The SNB activated their cavalry every time the price got close to 1.0710-20

As you can see from the EUR/CHF chart above, the 1.07 level turned to be a very strong support level this week. That´s not a big surprise, though, given the fact that a central bank is sitting just below there. Well, that was a strong enough reason for us to buy this pair close to that level and we closed the week with 70 pips from this pair.

If you followed the forex market this week you must have noticed it has been steadier than in the previous two weeks. The positive sentiment towards the USD continued this week as well, with the great US durable goods orders adding another reason to buy the Buck. However, apart from USD/JPY,  the USD uptrend has slowed somewhat.

Well, after many cent races, I think it´s about time for a breather. In fact, in the coming days we might see a retrace, at least until the sellers are done with profit taking and position readjustment.

If it wasn´t for the US durable goods orders data on Wednesday which pushed the USD another 100 pips higher, the Buck might as well have stalled this week, because most of the major forex pairs closed the week only 100 pips lower against it, apart from USD/JPY (of course).

USD/JPY buyers continued their relentless buying this week and once the 111.35 resistance level was out of the way, they took the price for another 300 pip ride in the last few days.

EUR/USD sellers, on the other hand, had another go at the downside, but a certain long-term support level that we highlighted in one of our updates stuck its foot on the ground and a retrace higher followed. That´s the first failure of EUR/USD bears in the recent weeks, but the pullback is not substantial enough to reverse the trend. I think the sellers will have another go at that support level again next week, probably after the retrace is over.

Of course, the OPEC meeting was another major factor this week which turned out to be nothing more than a scarecrow for oil and CAD bulls. It´s not over by any means and the negotiations will continue next week, but compared to market expectations which were expecting a deal at last, this OPEC meeting turned out to the opposite for the CAD.

Elsewhere, Jill Stein (Green Party 3rd party candidate) just filed for a recount of the votes in Wisconsin and – by the look of it – she will do so in the other two states, Pennsylvania and Michigan. The chances of a turnaround in favour of Clinton are extremely low, but that might mean trouble for the USD if this thing precipitates, so let´s bear that in mind for next week.

The most important economic data release this week by far was the US durable goods orders. Although there were some caveats in the components of the report, which we briefly explained on Wednesday, it still showed an impressive bounce on the orders.

A 4.8% jump in the orders from the previous month can´t go by that easily. It will translate to a higher economic activity in the following months and it has had the most impact on the forex market, as it fuelled the next round of USD buying.

In Europe, the services and manufacturing numbers for October showed that the Eurozone economic recovery is on the right path and it´s picking up pace indeed. Still, the forex market is totally driven by greater forces than the economic data nowadays, so until this sort of trading is over the economic data will be ignored.

EUR/USD has been trading in this 10 cent range for nearly two years now, but in the last two weeks, the price action has been telling us that something is starting to stir and the 800 pips move top to bottom clearly shows that. Of course, this pair is heading to the downside, but as we can see from the weekly chart the stochastic and REI indicators are already oversold while this week´s candle formed a doji, which is a reversal signal. Besides that, if we look at the monthly forex chart, the same indicators are almost oversold, which means that by the time the month ends (3 days) and considering this month´s massive bearish candle, these indicators will be well oversold. 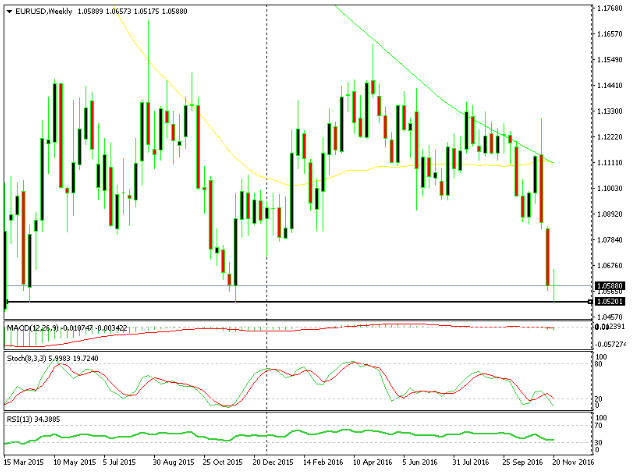 A doji was formed this week in the weekly forex chart 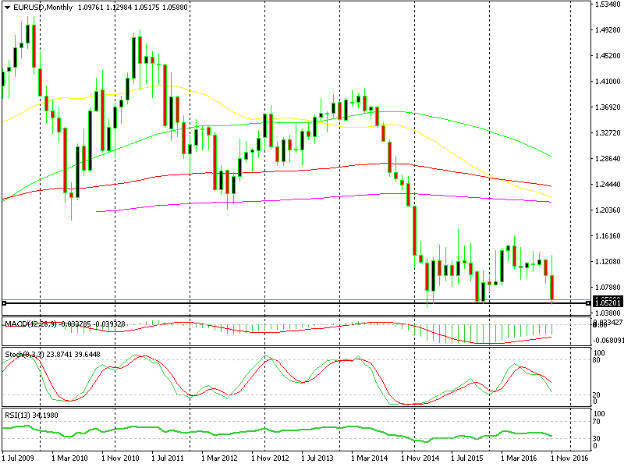 The stochastic and RSI indicators will be oversold soon

That said, the H4 EUR/USD chart paints a different picture. The price is overbought in this timeframe chart and the 50 moving average (50 SMA in yellow) is providing some solid resistance, which point to a continuation of the downtrend. The market sentiment also points down. So, now we have two opposing opinions according to the technical and fundamental analysis. The market will decide which way it wants to go. 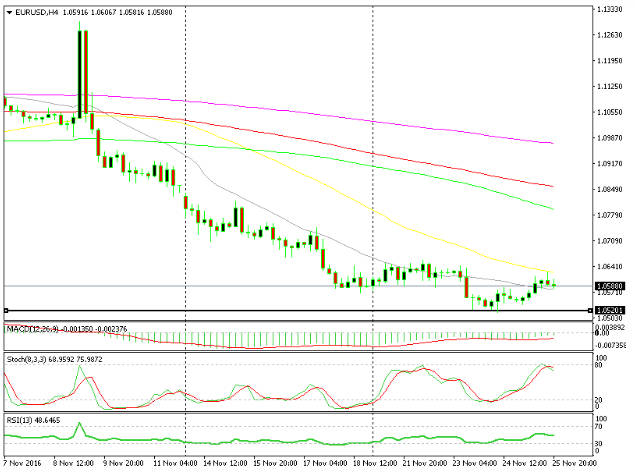 The H4 EUR/USD chart still points down though

This is it for the week. We closed the fourth week of November well in profit, bringing our monthly total to around 500 pips with three more days to go. We´re getting close to the end of this strange and adventurous year and the profit is accumulating as days and weeks go by. Perhaps we´ll close this year with a bigger profit than last year. The USD has been going up for three weeks now, so next week I´ll be weary of USD longs. I´ll be more open minded to a two-way business. See you on Monday morning, everyone.