The yellow metal Gold never disappoints us as it usually moves just as we predict. Recalling yesterday's live market update, Bearish Gold & The Eurozone – A Potential Trade Idea, we decided to remain in selling below $1277 with a stop loss of $1282 and a take profit of $1268. So far, things are moving in our favor and the Gold is on its way to hit the $1268 trading level.

The demand for haven assets faded as investors increased their bets on the equity market in the wake of the French presidential election. The U.S. dollar index has also drawn attention today after a major selloff against the Euro.

For now, I'm looking at the New Home Sales and the Consumer Confidence from the United States, which is likely to be released in the New York session at 15:00 GMT. The positive figures are likely to give bearish momentum to the bullion market and vice versa. 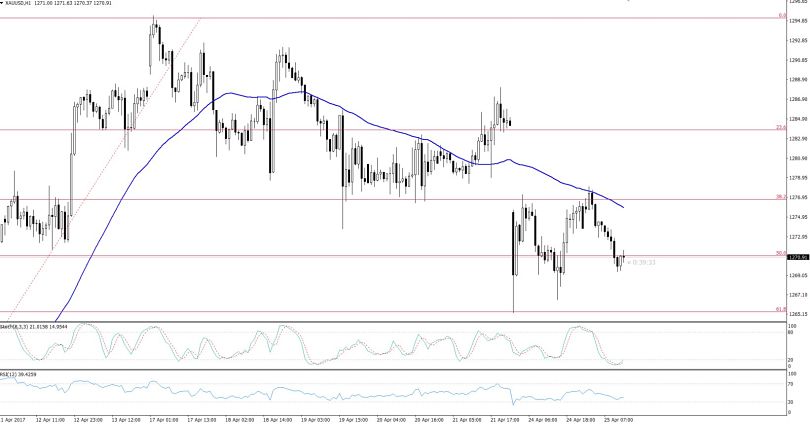 Now let me highlight the technical side of the market. Yesterday, the Gold shifted its sentiment from bearish to bullish. The Gold failed to break above $1277, a major resistance level. The next resistance is found at $1265, a 61.8% Fibonacci retracement level. We may see the Gold targeting $1258 and even $1249 on the breakage of $1265.

At the moment, Gold is holding at $1269 and is very close to hitting our previous trading signals take profit. Later, I will look to enter the buy position near $1265-67 with a stop loss of $1262 and a take profit of $1270. So keep following us, as we are likely to enter a new trade in the New York session!