Forex Signals US Session Brief May 10 – Tone Setting US Inflation

Time to see the truth where inflation stands in the US

The US CPI (consumer price index) report is being released a day after the PPI (producer price index) report. The PPI report was worse than expected so the market is interested to see whether inflation is picking up or if it is making a turnaround. The USD has been retracing lower today, which has opened up several trading opportunities. Let’s see what the situation is out there and what trades we can take.

US CPI Inflation Up Next, Buckle Up for Some Nice Action

Yesterday, we had a chance to see the US PPI (producer price inflation) report and it wasn’t good. Its decline to 0.1% from 0.3% previously. Today, we will see the main inflation report. The CPI (consumer price index) which is the main inflation measurement will be released shortly.

Unlike the PPI report yesterday, the headline number of the CPI report is expected to come at 0.3%. Inflation started picking up in September of last year and we have seen several months with numbers such as 0.4% and 0.5% during this period. That has been one of the factors for the improvement in the sentiment towards the USD, also helping the USD reversal.

Subdued inflation and low wages have been the main reason for the FED remaining dovish. In the last several months though we have seen these two aspects of the economy improve slightly. The FED has become a tad more bullish, hence the reversal in the USD.

Last month, the headline CPI inflation declined to -0.1% which means that prices fell by 0.1%. If we see another negative number today, it will be the second one in a row and that won’t be good for the Dollar. On the other hand, if it comes as expected at 0.3% or even a tad lower at 0.2%, then I expect the sentiment to remain the same for the USD. If we see a positive number at 0.4% or 0.5%, the USD will complete another bullish sequence. The core CPI number is also important. That’s expected to come out at 0.2% as previously. Although, the reaction on the USD will be the same as with the main CPI number if we see any deviations.

Commodity currencies such as the NZD, CAD, and AUD move together. When the market sentiment is positive in financial markets, these currencies feel energetic and start breaking resistance levels. When the sentiment is negative, Com Dolls dive lower.

Today, the market sentiment has been positive and the USD is retreating somewhat after trending up for about three weeks. The Canadian Dollar is taking full advantage of the current situation and USD/CAD has lost 200 pips since yesterday. The climb in Oil prices is helping the Loonie a great deal. Donald Trump scrapped the Iran deal, which means that there might be sanctions on exports from Iran. What’s the main export? Oil, of course, as well as carpets. So, Oil prices are making a bullish move and the CAD is reaping the benefits.

AUD/USD is climbing now and has formed a small uptrend since bottoming out just above 0.74 yesterday. The Kiwi, on the other hand, reached some fresh lows overnight. This divergence is bad news for the Kiwi and we just took a trade which we will explain below.

The Year-on-Year CPI (consumer price index) inflation fell from 2.1% to 1.8% in New Zealand. That’s quite a miss and the Reserve Bank of New Zealand (RBNZ) took notice right away. RBNZ Governor Adrian Orr said earlier today that currency intervention is a useful tool for the central bank and a rate cut is a valid option. These are terrible words for the NZD, hence the new lows today. The Aussie and the Kiwi have been pretty bearish recently, but this makes things really bad for the NZD. We are completely bearish on NZD/USD now. 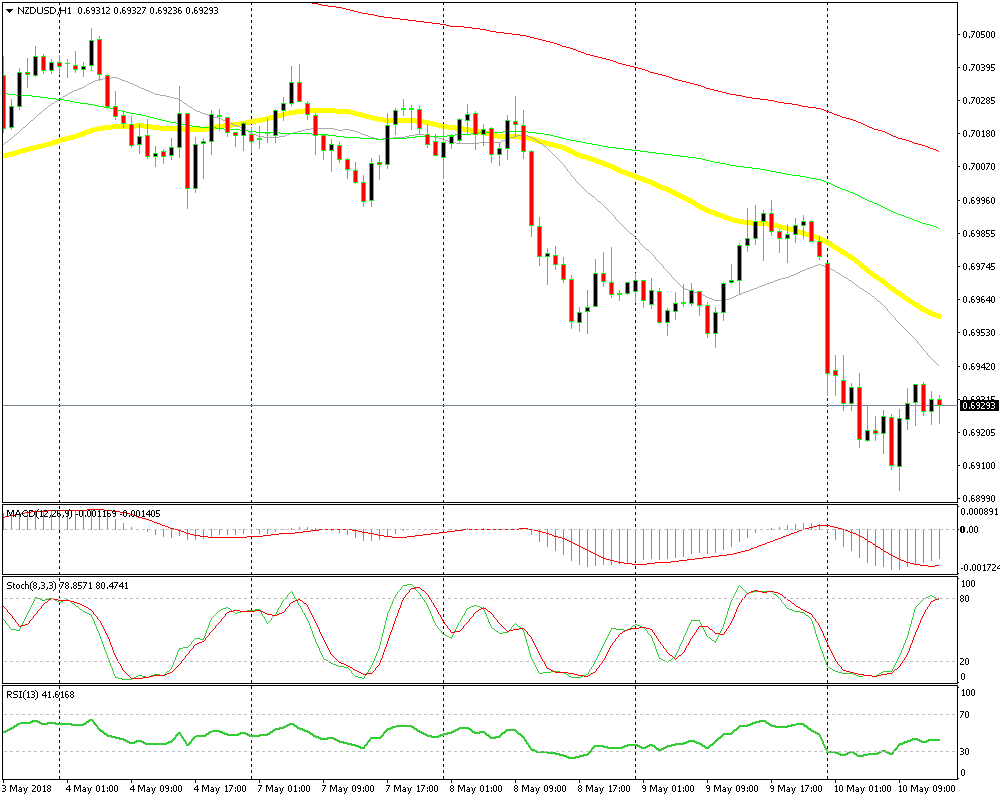 We already sold NZD/USD before reaching the moving averages

We just opened a sell forex signal in this pair. The price hasn’t reached the 20 SMA (grey) or the 50 SMA (yellow) above, but this pair looks very weak and I don’t want to miss the bearish reversal that’s about to happen soon. The reverse is beginning so we are good with this trade.

The US PPI report is about to be released and I’m thinking of going long on USD/JPY right now since this pair is finding support at the 50 SMA on the H1 chart. The Bank of England (BOE) is giving their verdict and the GBP has just dived 100 pips, so let’s get this article posted and have a look at what the BOE is talking about.