In the last two weeks, the sentiment has turned pretty bearish in financial markets after the trade war between US and China, which was coming to an end as both sides were heading towards a trade agreement, escalated once again. As we know, China pulled back from promises to tackle IP theft and forced technology transfers which forced Donald Trump to elevate tariffs on Chinese goods and China responded back with retaliation. But towards the end of last week, the sentiment improved in financial markets and stock markets reversed higher together with USD/JPY, while GOLD reversed lower.

But today the sentiment has turned negative again, which we can see from the bearish price action in stock markets. In the early hours of the morning, Commodity Dollars were on a small bullish run which could have come from the jump in the Japanese GDP which increased by 0.5% in Q1 of this year as this morning’s report showed, against a 0.1% decline expected. But that didn’t last long and the sentiment turned negative again, especially in the European session and stock markets have been pretty bearish during this time. China is going to suspend doing business with suppliers which stopped supplying to Huawei, which means that the Chinese are holding their position. This will only escalate trade tensions further, so markets are anticipating it, hence the negative sentiment today. 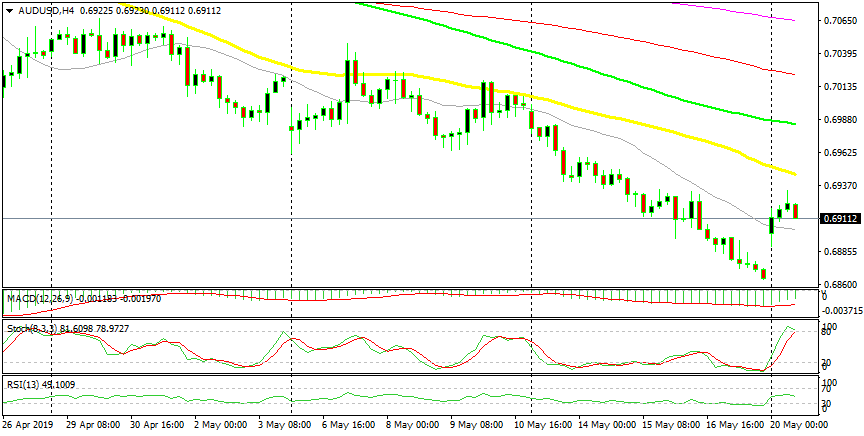 Stochastic is overbought and turning down now

AUD/USD has been pretty bearish in the last several weeks and it continues to be bearish as the sentiment deteriorates ober China-US trade war escalation. The market is expecting the Reserve bank of Australia to cut interest rates after the central bank of New Zealand did so two weeks ago. But we saw a bullish pull last night and a bullish retrace higher, which is now complete as stochastic shows. This pair is overbought on the H4 chart now and it is reversing down, so we are thinking of going short on it soon.

The trade war seems to be getting worse as none of the involved parties are backing down. In fact, they are pushing their positions as China is threatening to support Huawei. That tells you that Huawei might not actually be a proper private company. The economic calendar is pretty light, but there are a few FED speakers. Although, I don’t expect much action from them.