This Morning's Retail Sales Figures Have Led To Choppy Action On Wall Street.

Today is a retail sales day, with reports coming out of the UK this morning and later on from the US. Although, the economic calendar started with the Australian jobs report early in the Asian session. The unemployment rate for July remained unchanged at 5.2% but the employment change figures came much better than expected at 41.1k, against 14.2k anticipated. That sent the Aussie higher, although it has pulled back lower now.

The UK retail sales report was released this morning in the European session. In the report released last month, expectations were for a 0.3% decline in retail sales in June, but it came out positive at 1.0%, which was revised a tick lower today to 0.9%. Today’s report was expected to show another decline of 0.3%, but the numbers for July came out positive again, showing a 0.2% growth, which is not much but closes the economic week on a positive footing for Britain, after the impressive inflation and earnings figures we saw in the last few days.

The retail sales report from the US was just released. Retail sales have been steady in the US in the last two months, showing a 0.4%-0.5% growth for both headline and core sales. Today’s report which was for July showed a bigger jump of 0.7% in the headline sales, but core sales offered the biggest surprise when they posted a 1.0% jump for last month.

Another thing to keep an eye on today are the US and UK bond yields. Yesterday the yield curve inverted and fell 1bps, meaning that interest for 10 year bonds/treasuries is 0.01% lower than the 2 year bonds/treasuries. 30-year yields are holding at a record low below 2% and down by another 5 bps today, which might spill into forex and commodities markets, so we should keep an eye on the yield curve. 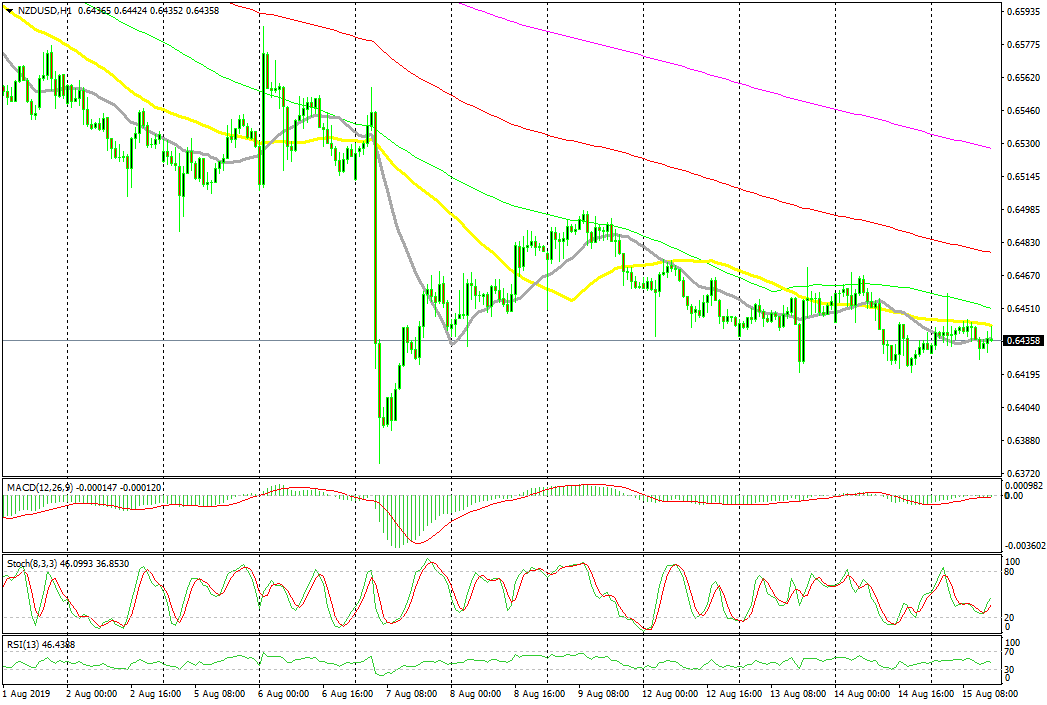 Pullback are good opportunities to go long on EUR/GBP

NZD/USD has been on a bearish trend for more than a month since it reversed at the middle of July. The trend was pretty strong in the first couple of weeks and the smaller period MAs such as the 20 SMA (grey) and the 50 SMA (yellow) were providing resistance on the H1 chart and pushing this pair lower. The trend slowed in August and the larger moving averages caught up, so they turned into resistance for this pair during this month. The 100 SMA (green) and the 50 SMA are providing resistance today and the pressure remains on the downside, so we still keep a bearish bias for this pair.

The retail sales from UK and US were pretty positive today which is a good sign for the shape of the UK and US consumer, especially after the jump in the core US sales. But, comments from China are keeping the sentiment subdued in financial markets. I suppose the trouble in Hong Kong will continue to elevate since China is trying to snatch the small island.