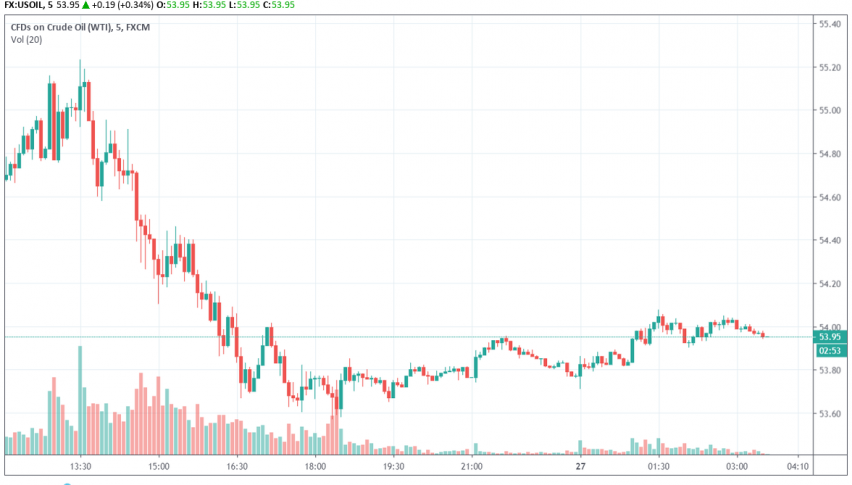 WTI crude oil prices climbed higher early on Tuesday following some optimistic comments on the trade war coming in from US and China. At the time of writing, WTI crude oil is trading at around $53.95 per barrel.

After falling 1% lower on Monday over fresh escalation of tariffs war between the two countries, Trump appreciated China’s comments about finalizing a trade deal through calm negotiations. This was taken as a positive sign and served to improve the market sentiment slightly.

The US-China trade war has driven significant bearishness in crude oil in recent times, causing oil to lose around 20% of its value since April 2019. This is over concerns that heightened trade tensions could cause a slowdown in the global economy, thereby reducing the demand for oil in markets.

Late last week, both the US and China had unveiled a fresh round of tariffs on each other’s imports, sending markets into a bit of a flash crash towards the end of the US session. This sentiment continued to weigh on markets into Monday, but comments from Chinese Vice Premier Liu He and US President Donald Trump have assured the markets that they are still keen on negotiating a trade deal.

Arslan Butt // Index & Commodity Analyst
Arslan Butt is our Lead Commodities and Indices Analyst. Arslan is a professional market analyst and day trader. He holds an MBA in Behavioral Finance and is working towards his Ph.D. Before joining FX Leaders Arslan served as a senior analyst in a major brokerage firm. Arslan is also an experienced instructor and public speaker.
Related Articles
Crude Oil Extends Bullish Bias Amid Weaker Dollar - All Eyes on NFP Figures!
During Friday's Asian trading session, the WTI crude oil managed to extend its previous day winning streak & hit the 14-month high around we
16 hours ago