Draghi leaves a gift for Lagarde when She takes his position

Today was the day everyone has been waiting for, since late spring. The Eurozone economy has weakened considerably this year, with inflation falling below 1.0% and the manufacturing sector in contraction in major Eurozone countries. Many other major central banks have been cutting interest rates in the last few months as global economy deteriorates, so traders were anticipating something concrete today. Perhaps a rate cut, or restarting the QE, or both. Or perhaps announcing a fixed date for any of these options.

The Euro had started to turn bearish yesterday in anticipation of this meeting, as I highlighted in the forex brief. Although, this morning the Euro was retracing higher. But, the ECB cut deposit rates by 10 bps to -0.50% from -0.40% previously and they also announced a date for the restart of the QE (quantitative easing) programme. That will start on November 1 and will be a €20 billion per month bond purchase programme. These measures still fall short of market expectations, but the Euro has made a bearish leg lower after the ECB actions today. The sentiment has also taken a hit with safe havens on the march now. 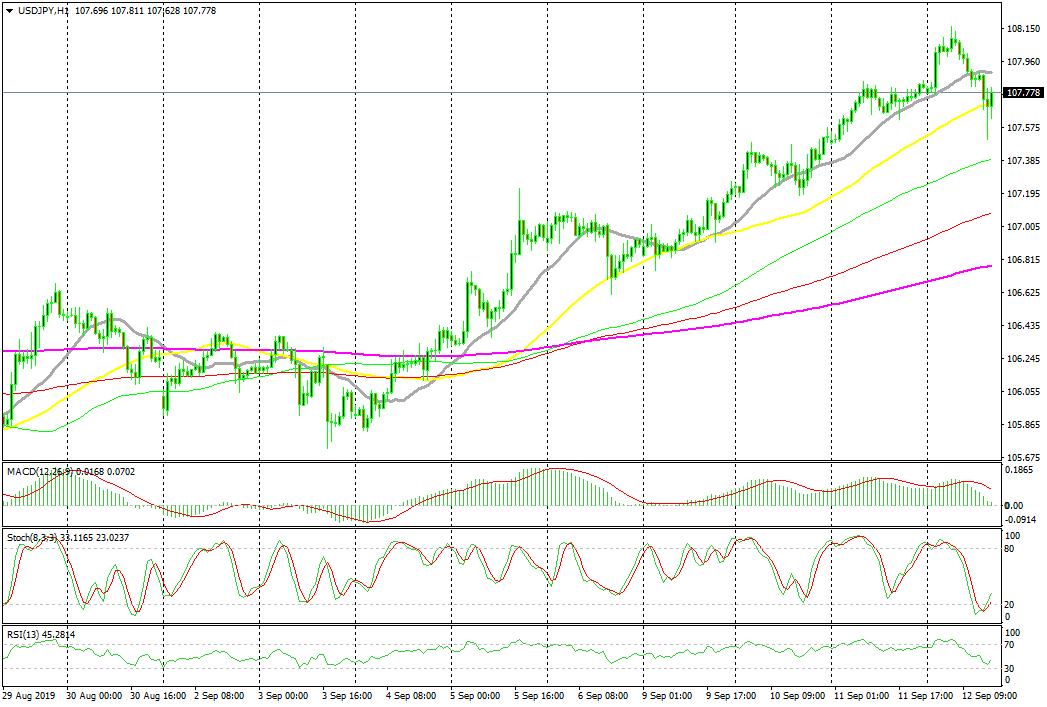 The 50 SMA is providing support on the H1 chart

USD/JPY has turned quite bullish in the last week or so, as the sentiment in financial markets improves. During this time, the 20 SMA (grey) and the 50 SMA (yellow) have been providing support on pullbacks lower. Today we saw a decent pullback. The 20 SMA gave way easily today, but the 50 SMA seems to be doing its job correctly now. The price pierced it earlier, but it has returned up, so it doesn’t count as a break. The previous H1 candlestick closed as a hammer, which is a bullish reversing signal, so the reversal higher might come soon.

The Euro lost around 100 pips earlier today after the ECB meeting and press conference. But it has reversed up now and has reclaimed almost all the losses. The GBP is higher as well, so I suppose this move comes after Charles Grant, the director of the Centre for European Reform, wrote about higher chances of a deal after meeting with EU and UK officials.