The economy of the Eurozone has been weakening for a long time and fears of a recession increased by the middle of last year. The European Central Bank (ECB) turned dovish and cut deposit rates to -0.50% in September, while restarting the QE programme of 20 billion Euro purchases a month in November. Now, it seems like those measures are starting to show the effects, with inflation picking up from below 1% and remaining at 1.3% for December. Construction activity also posted some decent gains for November. We have heard ECB member made some positive comments recently, suggesting that the economy is stabilizing now, after the slowdown and recent figures point at that as well, including today’s inflation and construction reports. Nonetheless, EUR/USD kept declining today.

The UK economy on the other hand, used to hold well until the middle of last year, but it started weakening as well and the slowdown is picking up pace. Today, retail sales for December came in negative again, which is the fifth decline and last month’s contraction was revised even higher today. This is the worst run since 1996 and odds for the Bank of England cutting interest rates soon keep increasing, which have turned the GBP bearish. 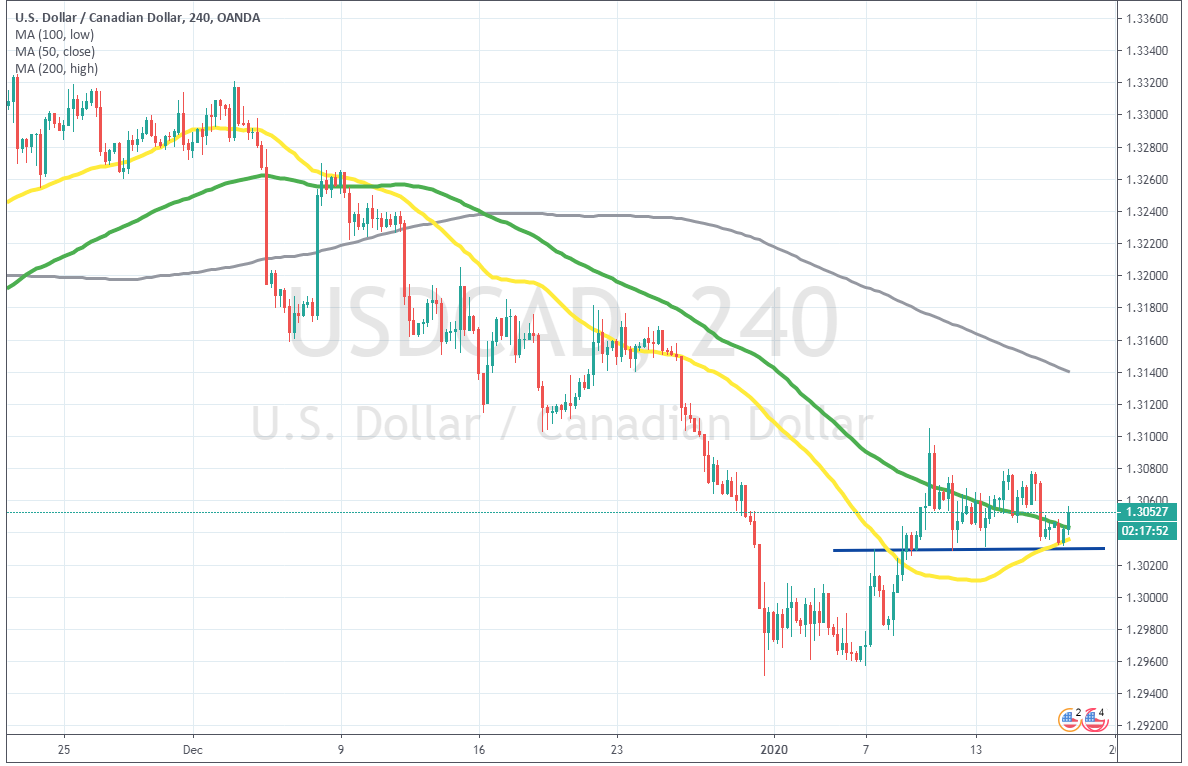 The 50 SMA is acting as support today

USD/CAD turned bearish in December, as the CAD turned bullish, following crude Oil after OPEC+ decided to cut production again and place new quotas of 50k barrels/day, on top of the previous ones. As a result, USD/CAD remained bearish all months and lost nearly 400 pips from top to bottom. This pair slipped below 1.30 at the end of the month, but reversed higher this month. The tensions in the Middle East gave crude Oil a push higher, but tensions abated after the US didn’t decide to attack Iran back, after Iran retaliated on US military bases in Iraq.

So, crude Oil retreated lower, with WTI losing around 8 cents and as a result, USD/CAD turned bullish, climbing above 1.30 again. Last week, this pair climbed just abov 1.31, but it has been retracing lower this week. Although, it seems like a support level has formed at 1.30 and tghe retrace is now complete, so we decided to go long on this pair and opened a buy signal a while ago. Now, USD/CAD has bounced off the 50 SMA (yellow) after the positive US retail sales for December, so this trade seems to be going well now.

Today, the USD found its feet again. Inflation is stabilizing in the Eurozone and we are seeing some green shoots in the data here and then after more than a year of disappointing figures, but the Euro kept declining against the USD. Risk currencies and safe havens have been retreating as well, so the USD seems to be resuming its long term uptrend.