Polygon (MATIC): A former leader and an outlier in the cryptocurrency market has finally succumbed to the sell-off that has plagued the entire space since late 2021.

Since reaching new all-time highs in November 2021, the major cryptocurrencies, Bitcoin (BTC) and Ethereum (ETH), were down more than 40% at the time of writing with no signs of bottoming yet.

Polygon (MATIC) defied the bearish sentiment on the market by proceeding to rally higher for about a month longer than both Bitcoin and Ethereum, to emerge as a possible new market leader. However, as we entered the new year, this was not to be. Polygon (MATIC) fell from new highs, breaking down a midterm uptrend line, which began in the first quarter of 2021.

Sell-off Due to US Fed Tapering

The sell-off in the cryptocurrency and US equity markets could be directly attributed to the tapering policy of the US Federal Reserve. A possible faster rate of tapering was announced, to curb high inflation in the US. This will negatively affect the capital inflow into risky assets, such as cryptocurrencies and the stock market. Money outflows from both markets have been evident, as cryptos fell into bear market territory, while US equities have been in the red for three consecutive weeks. 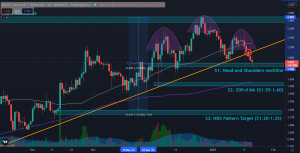 What to expect: Four  Potential Scenarios for MATIC

As we can see in MATIC’s daily chart, it fell below the golden uptrend line a few days ago, as selling pressure continued to ravage the cryptocurrency markets. It has also formed a head and shoulders pattern, sometimes referred to as a triple-top pattern, which is a bearish technical pattern that could be interpreted as a loss of buying power on the part of the bulls, as it tried to make new highs a third time. Instead, the bears have taken control, showing selling pressure as they took money off the table, while the overall market showed signs of heightened volatility and risk. Given this, I see four potential scenarios for MATIC in the near future.

Ripple Price Prediction: XRP Struggles Below $0.38, What to Expect
2 hours ago