If you have been following the forex market, you must have noticed that last week the attention was on the folks who run the two most influential central banks in the world, the ECB, and the FED. They provided most of the action for the forex market last week when the forex traders were trying to get comfortable in their trading desks after the holiday period. If you haven´t had a chance to read last week´s review, you can check it out here.

This week the central bankers were still the main theme, but the economic data made its way through to mix things up a little… well, actually a lot. Add market sentiment to that and the situation became explicit.

I can´t say that the volatility was extremely high, but the fundamental indicators, the technical indicators, and the market sentiment kept opposing each other. The economic data offered plenty of surprises which made the price action unpredictable, but we still ended up with a 42 pip profit.

It´s not very clear why the market sentiment was so bullish towards the USD this week. The US economic data was disappointing and the comments from FED members were very dovish, yet the USD remained well bid throughout the week. Maybe the market still thinks the FED will hike the interest rates next Wednesday, although the rate hike odds have decreased to about 20%.

Well, as forex traders we shouldn´t care about the reasons why the market moves the way it does. We must read the price action (which exposes the market sentiment) and simply follow it. 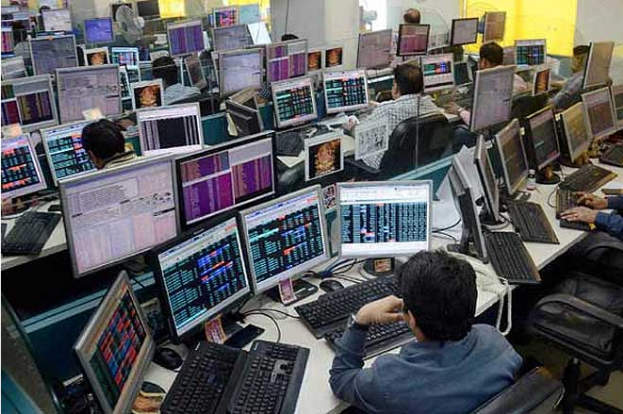 Question: What´s the most distinguishing moment in the forex market this week?

If you have some experience in forex or if you have followed our live market updates this week then you must at least have a rough idea. Hint: Price action. Not there yet?

Answer: The market sentiment. It totally ignored the fundamentals despite a few hiccups.

Yes, the market sentiment ignored the fundamentals if we look at the charts now that the week is over, but it wasn´t that straightforward if you followed the market during the week. There were spikes and whipsaws after economic data releases and when the FED, BOE (Bank of England) and BOJ (Bank of Japan) members made their appearances.

In forex jargon, that´s called ‘noise’ in the market. It´s easy to get caught off guard when the market sentiment points in one direction and the fundamental analysis point in another direction. Noise causes some indecisive market moves when it comes to the market direction, but the disorderly price action might easily trigger stop losses, even when you are in the right direction. So, many forex traders didn´t have it easy this week, including us.

We still closed the week with a 42 pip profit from our 16 forex signals. We closed 10 signals in profit this week, 5 hit stop loss and one remains open. That gives a 69:31 win/loss ratio. We hesitated and missed some good opportunities this week – which would have doubled our profit. But it´s human nature to remember only the good opportunities that we lose, because if I go through my trading journal, I can see that we passed on some not-so-good opportunities which may have resulted in a loss. So, let´s just enjoy what we have earned this week. 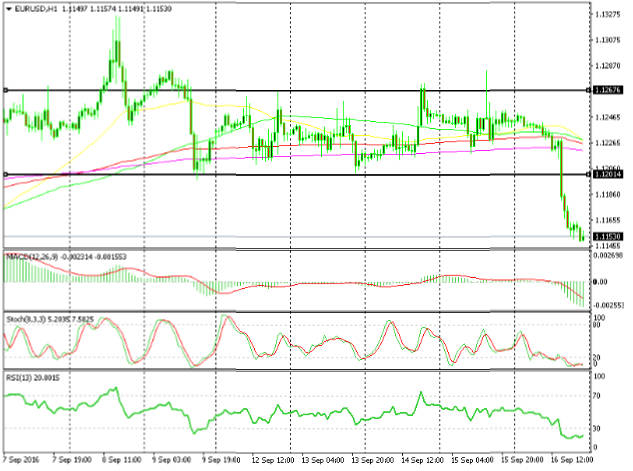 Our most profitable forex pair this week was EUR/USD. During most of the week before the breakout lower, this forex pair was trading in a tight range between the resistance level at 1.1260-80 and the support level at 1.12, and this was aided by a number of moving averages just above there. We opened three buy/sell forex signals near the top and below the bottom, all of which were closed in profit for a 72 pip profit.

Looking at the forex charts, I had the feeling all week that the market had already made its mind up and nothing could change it. As the week progressed, this feeling grew stronger and the evidence increased day after day as the forex market “ignored” the economic data and the central bank officials. We can split the divergence between the market sentiment and the fundamentals into four parts, which best describe the forex market this week.

1.      The FED officials – On Monday, a number of members delivered some soft comments with Brainard closing the day on a very dovish note. The market was looking at her to signal a delay of the supposed September interest rate hike and she did a lot more than that. She started and closed her speech pointing out only the weakness and risks the US economy faces. But, after a short-lived USD dive, the market decided to forget about Brainard and start flirting with the Buck again.

2.      The BOJ – On Tuesday, the BOJ guys decided to play their next card in fighting the dovish market sentiment towards the USD/JPY or the JPY bullish sentiment. A report from Nikkei showed that the BOJ is looking to take the interest rates deeper into negative territory and increase bond buying. The Yen lost about 200 pips in the next two days, but as we have seen during this year, once the attention shifts away from the BOJ, the JPY bulls regroup again and that´s exactly what happened this week. USD/JPY resumed its downtrend again. After all, better safe than sorry with the JPY.

3.      The BOE – In August, the BOE cut the interest rates to 25 bps (basis points) from 15 bps following the Brexit fallout, but the economic data has shown a lot of improvement since then, so no one was expecting the BOE to take additional steps this week… and indeed they didn´t. This must be positive news for the GBP, but instead, it kept sliding the entire week, ending the week as the biggest loser among major currencies.

4.      The US economic data – The US economic data continued to disappoint this week as well as in all fronts. The retail sales, producer inflation (PPI), industrial production, capacity utilization, consumer sentiment, you name it, they all missed the expectations. Even the consumer inflation (CPI) number on Friday were misleading as we explained in our last market update that day. Guess what? The market took the CPI headline number and run away with it, pulling the Buck up with it, while it ignored all the other disappointing US data.

So, that makes it 4-0 for the market sentiment. The central bankers and the economic data had no say in the forex market this week. The price action tried to tell us that the entire week and we tried our best to share it with you in our market updates.

As we have recently seen, the economic data has been very volatile and mixed up. There has been no clear trend, and the carried into this week too. The economic data from Japan on Monday was a good example of that, the core machinery orders and the industrial production came out positive and above expectations, while the producer inflation and the machinery tools orders declined from the previous month.

The Eurozone data suggested the same thing, too. The employment change and the Italian industrial production grew by 0.4% q/q and m/m, respectively. On the other hand, the EU ZEW economic sentiment picked up from last month but missed the expectations, the EU industrial production declined by 1.1% and the trade balance declined to +20 billion Euros against 23.8 billion last month.

Only the US economic data kept up a constant trend this week, heading south. It´s surprising to see how the data showed an improvement in the US economy from early spring to June, while the data for July and August has been quite disappointing. Thursday was a horrible day in terms of retail sales, producer inflation (PPI), capacity utilization and industrial production all declining. Only the Philly FED manufacturing index rose by 12.8 points. The Buck remained unfazed, though, since the forex market had already made its mind up.

EUR/USD has totally been under market sentiment rule this week. Whether it was the 100 moving average (MA) in the daily chart or the FED meeting next week, this forex pair kept ignoring the economic data and the FED officials. Even if the decline this week was entirely due to covering (closing) of the long EUR/USD positions before the FED, we can´t ignore the 100 MA which has been like an iron gate for this pair. It hasn´t closed above it in two years and the price is being pushed down by it. It is a bit early to tell, but as it stands right now, the monthly candle paints a very dovish picture. The price tried the upside, but after failing to move higher it declined to the bottom of the monthly candle. The FED meeting will decide the near-term future for this pair but if the downside is to continue, then the 20 MA in grey on the monthly forex chart must be broken first. 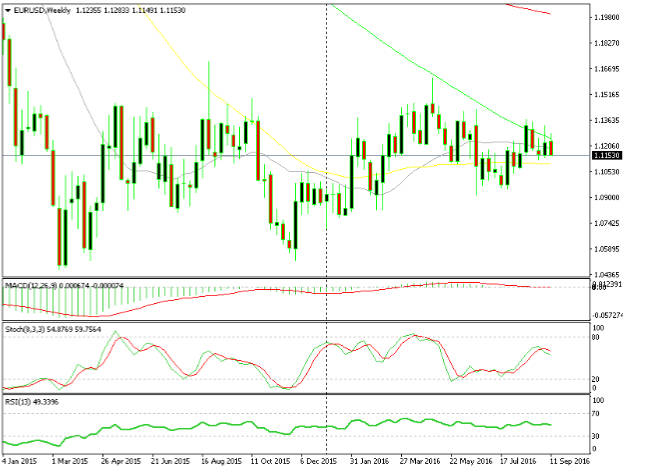 The 100 MA keeps pushing the price down 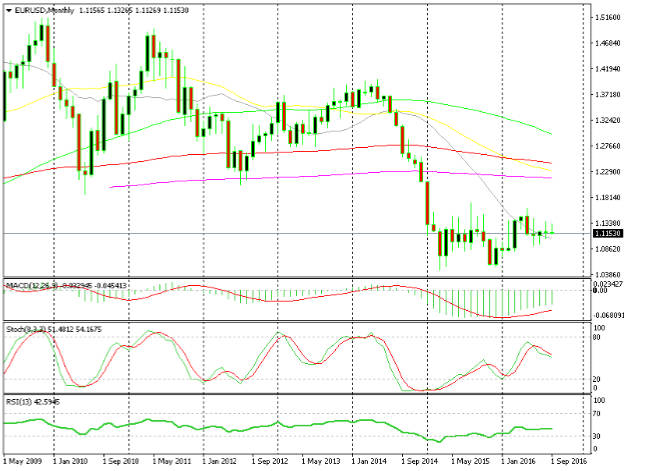 By the middle of last week, GBP/USD reached a zone of resistance which starts from 1.3370-80 and stretches up to 1.3550. It topped at 1.3440s and the stochastic indicator reached overbought levels on the daily chart, and that makes two indicators signalling a possible reverse. As we can see from the daily forex chart, this forex pair moved down to 1.30 by Friday evening after passing a small road bump at the 50 MA in yellow. Last week´s candlestick closed as an upside-down pin which also signals a retrace, but we were waiting for the price to move to 1.35 to open a long-term forex signal. Well, it didn´t and this pair is now about 450 pips lower. If the sentiment continues to be bearish then we might see the support at 1.30 and then 1.28 give way. 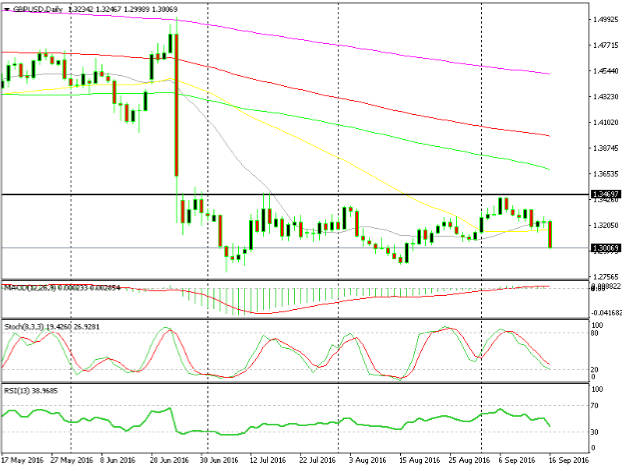 The resistance level proved too strong for this pair 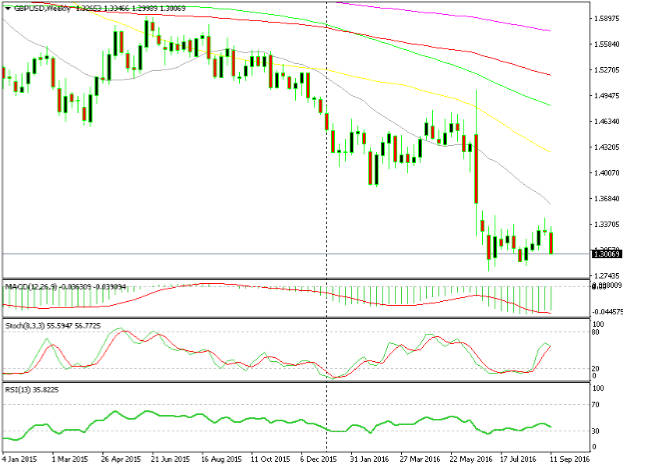 This was one of those weeks when the market just doesn´t care for other “minor factors” such as central banks and economic data. It had made its mind up and nothing could change it, apart from a few speed bumps on the road which proved to be too little, too late to change the direction of most forex major pairs. We still managed to close the week in profit and will try to make the most of it until the sentiment changes, probably until Wednesday when the FED meeting is scheduled. So, catch you guys on Sunday evening when the Tokyo session starts.