Another Punch For the Anti-Brexiters, GBP Bears the Burden - Forex News by FX Leaders

Another Punch For the Anti-Brexiters, GBP Bears the Burden

The anti-Brexiters, the pro-EU camp, the remainders or whatever you want to call the Brits who are against leaving the EU, took another blow today from the Northern Ireland high court. Apparently, they had applied their case to the court for a revocation of the Article 50. That's the last official action which starts the entire leaving of the EU process.
I'm not 100% sure exactly, but I think their case was based on a claim that the regional might hold the power to reject Article 50 because Northern Ireland, as well as Scotland, voted against Brexit. But the ruling said that it's not viable that Northern Ireland vetoes Brexit for the entire UK. Not even the experts know all the loopholes in the British constitution. However, common sense tells you that the will of the entire country prevails over a region.
Despite the fact, the folks up north might consider Northern Ireland as a country of its own. In that case, an independence referendum would come in handy. 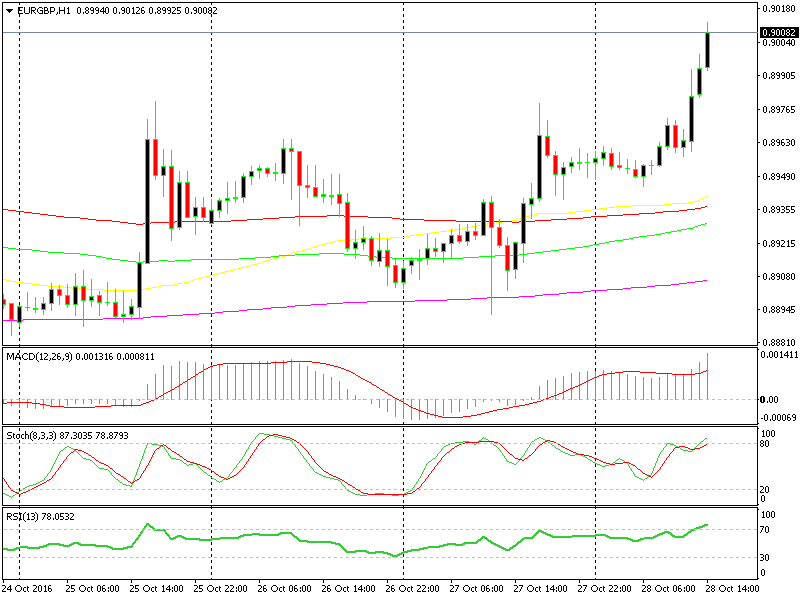 EUR/GBP is on a roll today, led by fundamentals
The GBP is the sore loser once again, which has to carry all the burdens of the Brexit process to the end of days. That's how long I think this process will take after triggering Article 50.
This is the story which has been held responsible for the 70 pips dive in GBP pairs. Technical levels can´t hold the price up when the fundamental analysis points down, so our GBP/USD forex signal couldn't survive this last GBP storm. RIP.
As you can see on the EUR/GBP chart above, this forex pair has surged about 60 pips higher in the last several hours and besides this last story from the land of the elves, the months end flows are adding fuel to the rally. Month end flows between the UK and the EU used to take place on the last day of the month, but now they are spread over a few days at the end of the month. Therefore, we might see some price action until Monday. Caution is advised in such times and probably staying clear of the GBP pairs.
Check out our free forex signals
Follow the top economic events on FX Leaders economic calendar
Trade better, discover more Forex Trading Strategies
Related Articles