Are you trading the volatility right now guys? We opened a buy forex signal in EUR/CHF since this are around 1.0750-60 used to be support during the slide, then it turned into resistance for most of last week. Now we´re hoping that it turns into support again.

Actually, we chose this forex pair for another reason besides the support/resistance level. The volatility has picked up in the last couple of hours in most major forex pairs, while the range in EUR/CHF remains relatively tight, so this diminishes the volatility risk. 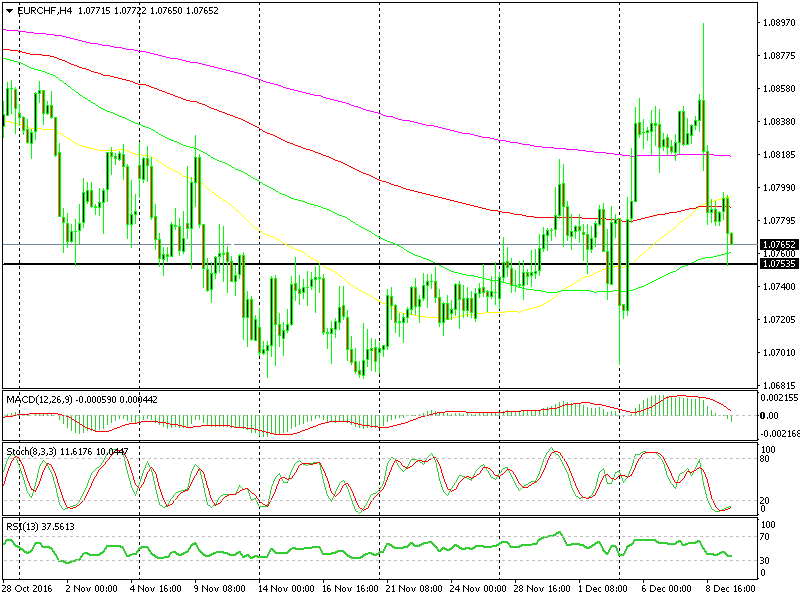 Is this support level going to be strong enough to reverse the price?

USD/JPY which we analysed in our previous update, was the first made the big move and spark this volatility. The 115 level which has been providing resistance in the last two weeks was broken just as we were posting the update. That turned into a broad USD buying which has become the norm now and all the other forex majors started jumping up or down.

But, the price dived 70 pips down just as quickly. I forgot to mention in the last update that the I would be weary in the first break; we know big money likes to hunt down weak stops. Whoever sold USD/JPY just below 115 with a tight stop a few pips above, must have been scorched by now.

It did look like USD/JPY sellers were going to throw the towel this time at 115 since the price was knocking at this level one too many times. The next resistance levels here remain 115.50 and more importantly 116.

EUR/USD on the other hand, lost about 70 pips when it declined from 1.0620 to 1.050. That has provided support before the massive 1.05 level and it proved to be a tough obstacle to overcome once more. In my opinion, that level will let go sooner or later, probably today.

The same happened on the commodity forex pairs, so I advise you to be careful because forex traders usually square their positions at the end of the week and London is closing soon. After such a week with plenty of price action and trading opportunities, I bet traders will call it a day and get rid of their open forex trades in order to avoid any weekend surprises.