As noted above, there are too many unknowns in the forex market right now. We know it´s a tough business, but the number of Xs and Ys has doubled in the recent months.

Trump alone accounts for a dozen of these new unknowns that have emerged in the forex market recently. Although his comments weren´t a big market mover this week, he could deliver a deadly sting for a forex trader at any time.

Trading the pound, on the other hand, has become a gamble with each subsequent Brexit episode unfolding. Knowing Trump´s abusive personality, I have this gut feeling that this newfound Trump-Brexit love will end up in tears some day, at the expense of the UK.

Europe feels a bit better now, as the Dutch have shown once again that they´re probably the nation with the most common sense in the globe. They voted off the “hot blonde”, so one out of three political risks brushed away for the EU, two more to go.

Almost forgot the FED, they increased the interest rates again this week by 25 basis points. Yet, the Buck lost nearly two cents in the last couple of sessions and we´ll explain why further below in the market analysis section. 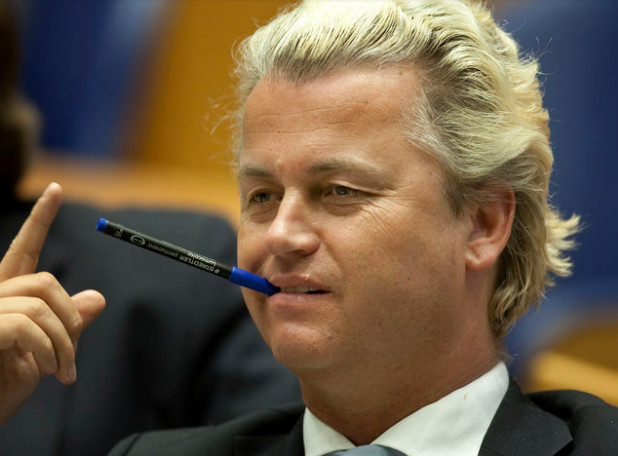 Someone need to tell this guy he lost

This week the market continued to behave in an irrational manner. All these political and economic events have made the traders confused, that´s why you can´t put together a group of forex traders large enough to keep the trend intact for more than a few sessions. We can´t blame the market, though, we had our chances this week and had we utilized them, we´d be at least 50 pips up now.

Last week, EUR/CHF started an uptrend which extended on Monday morning to 1.0820s. That´s about 80 pips above the opening price of our long-term forex signal in this pair. I was itching to close that signal at that time for around 80 pips, but 1.0879 seemed much closer since we finally moved above the 1.08 resistance level.

Well, the price reversed just as quickly that very same day and dipped below the entry price once again, so farewell 80 pips. I hope some of you did close that signal.

We also opened a short-term forex signal as well at 1.0727 during that dip on Monday, but we made the mistake of placing the SL at 1.0685. The bottom of the support comes at 1.0680, so the low touched 1.0683 on Thursday evening and that signal became history.

At least, we opened another buy signal down there and snatched back 25 pips from the market. So, we closed the week 59 pips down. Next week we´ll try to fight back with some long-term signals, particularly GBP/USD since Article 50 is getting closer, as well as buying into USD/JPY.

On Wednesday, the FED hiked the interest rates for the second time since December. That´s the fastest two hikes we have seen in a long time. According to forex textbooks, this should have pushed the Dollar 100-200 pips higher, but the Buck went the opposite direction.

Why did that happen?

We know the forex market loves to anticipate things because you can´t make money on a move if you´re late. So, I guess traders reached the conclusion that the path of the future rate hikes would be smoother.

The FOMC statement and Yellen´s comments weren´t extremely hawkish, which reinforced the idea of a smoother path, but at the same time… they weren´t particularly dovish either. Even the FED hike probabilities remained almost unchanged, but as we often say, ours is not to reason why… we have to follow the market.

EUR/USD benefited from that sentiment and the Dutch election gave Euro bulls another reason to remain long. The anti-EU candidate Wilders lost, although he read that as a win, go figure.

Brexit is now moving to the final stage, or the first one, whatever you wish to call it.  The Queen gave the green light for Article 50, which will be triggered in the next two weeks before March ends. That´s when real Brexit starts… and I think it will be messy.

Japan continues to be in doldrums as the tertiary industrial activity missed expectations and remained flat on Monday, while core machinery orders declined by 3.2%. Hence, the dovish comments from the BOJ (Bank of Japan).

The US producer inflation (PPI) came out positive, as both headline and core numbers beat the expectations on Tuesday. Consumer inflation was positive also, coming up above the market consensus. Too bad that core retail sales missed out.

The UK employment sector seems great at first glance, with unemployment claims declining and the unemployment rate moving down 1 point. But if you look at the wages then it all gets scary. A 0.6% decline in the last two months will surely weigh heavily in the pockets of the UK consumer.

The FED rate hike was the highlight of the week in the forex market, but the Buck fell anyway. At least the US economic data improved the sentiment as consumer sentiment, JOLTS job openings, housing starts, and manufacturing index picked up.

The daily forex chart for USD/JPY looks a bit oversold. Actually, when the next daily candlestick opens up on Monday, the stochastic indicator will be well oversold and probably RSI will be oversold.

So, there´s a case here to think seriously about opening a long-term buy forex signal. But, the low in USD/JPY so far this year has been 111.50s and from the look of it. Seems like we´re heading down there once more.

With both technical indicators oversold and two moving averages a dozen pips below, I think that 111.50 would be a good spot to take a shot at this pair. 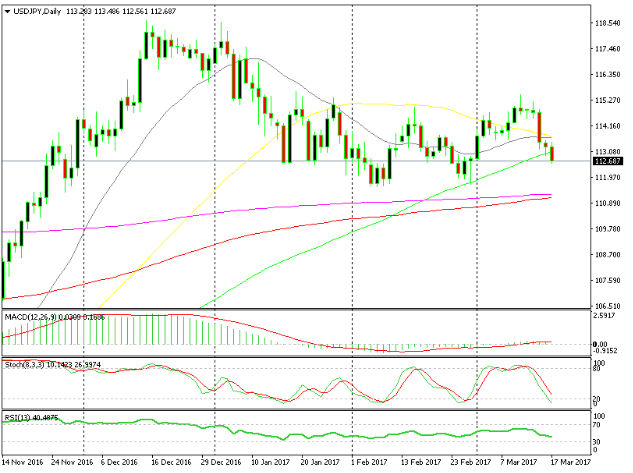 On the other hand, the monthly USD/JPY chart is strongly pointing down. So far this month we have been above 115 twice and dove back down, which means that there´s strong selling pressure up there. Besides that, the stochastic indicator is overbought and heading down, which makes this chart look bearish and contradicts the daily chart.

In this case, we will wait for the price to slide further down to 111.50. If it does, then we will watch price action carefully to see if there are enough buyers to reverse the downtrend. If not, then we will stay out until further notice. 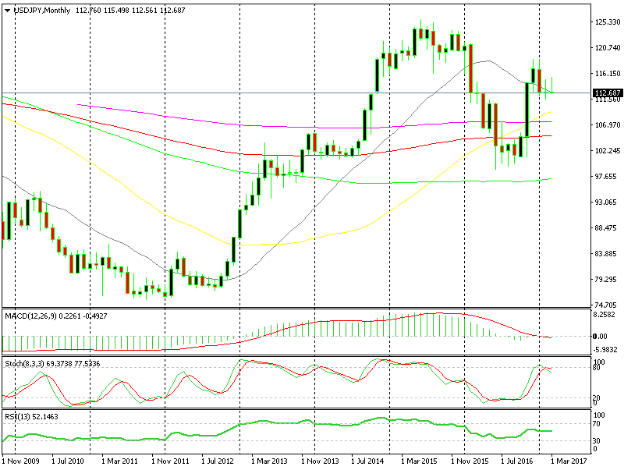 The monthly chart is pointing down with momentum

So, here we go guys, another week gone, and we´re edging closer to the end of March and the end of Britain being in the EU. We know Article 50 will be finally triggered in the next several days, but no one knows how it will end up.

The Brits are headed with their hands in the pockets toward the negotiations as Brexit leader said this week, so go figure. One thing is for sure, it will be very interesting and we´re bound to see some massive moves in the weeks to come. So then, let´s just try and get as many pips out of this mess as we can.